Covid France: What impact will the return to school have on cases? 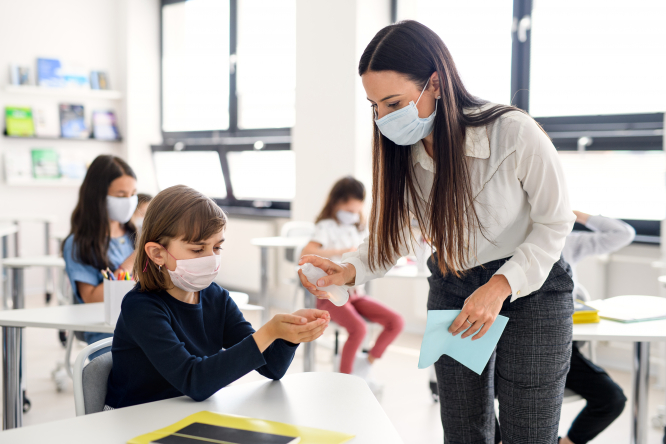 Schools go back today (September 2) in France, with Covid-19 measures such as mask wearing and handwashing in place Pic: Halfpoint / Shutterstock

Around 13 million children go back to school around France today (la rentrée), but concerns remain among teachers and doctors about the Delta variant of Covid-19, with the rate of cases among under 20s five times higher this year than it was at last year’s rentrée.

The government has set up a four-tier system that it states is designed to maximise the amount of time that in-person teaching can take place, while minimising the spread of Covid-19.

All schools in metropolitan France will start the new school year on level two, which means classes will be in person for all school levels, with certain rules about wearing masks, playing sports, social distancing and what happens if a pupil tests positive for Covid.

Read more: Back to school: Guide to Covid rules for parents and pupils in France

We look at the numbers to see what the Covid-19 situation is like for young people in France.

The reported incidence rate of Covid-19 - this is the number of cases per 100,000 people over the past seven days - is five times higher among under 20s this year than it was at the same point last year, but the rate of testing is also significantly higher.

However, this is highly likely to have been distorted by the fact that far more Covid-19 tests are being carried out this year, making Covid cases easier to detect

The 0-9 year olds in France are being tested twice as much as last year, and the 10-19 year olds five times more than last year.

The actual rate of positive Covid tests in the general population, including school-aged children, is lower this year than it was last year.

Currently, just 2.4% of all Covid tests taken in France are positive, compared to 3.8% at the same time last year.

This shows the virus is less prevalent in France now than it was at the rentrée last year.

Another key difference to this year’s school return are the Covid vaccines.

Around 87% of teachers in France have been vaccinated against Covid-19, a survey carried out by Ipsos at the request of the education ministry shows.

Among 12-17-year-olds, 62% have received at least one dose of a Covid vaccine and 43.7% are already fully vaccinated.

However, the vaccines are only available to over 12s in France, leaving younger pupils more exposed to the virus.

“The risk of intense circulation of the virus at the beginning of the school year is very high among this group of unvaccinated people,” France’s Covid-19 conseil scientifique, which advises the government on Covid measures, wrote in a report published publicly on August 25.

Arnaud Fontanet, an epidemiologist at the Institut Pasteur and member of the conseil scientifique, said that the rentrée will be the “most complicated situation that awaits us in the autumn”.

“Modelling done at the Institut Pasteur has shown that half of the new infections will occur in children from the autumn,” he said in an interview on radio network France Inter.

Bruno Lina, a virologist and also a member of the scientific council is equally concerned about it.

“We're talking about more than 10 million people in France who will find themselves in closed spaces.”

France’s education minister Jean-Michel Blanquer has admitted that there will be Covid-19 cases among the younger population, but said the new rules will limit that.

“The virus circulates in all age groups, and schoolchildren are no exception, but it is wrong to say that the school environment is more conducive to the spread of the virus than any other [environment],” he said.

"We remain capable of changing things according to the general health situation.”

Teacher in France: 'Great to get back to school despite Covid rules'

16 hours ago
2
Undelivered letters: Why is France’s postal service struggling?

23 hours ago
5
France to bring in vaccine passes: What will change and when?