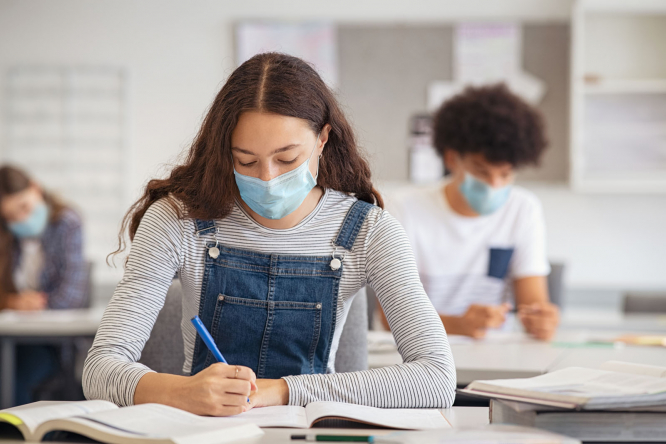 Ministry of Education in France has announced what the focuses will be for 'rentrée scolaire 2021' Pic: Rido / Shutterstock

The priority in French schools is helping with Covid catch-up, the Ministry of Education has announced, whilst a longer-term focus will be on reading, continuing to improve standards in maths, developing digital skills, completing the reform of the baccalauréat and introducing more sport.

There will, as usual, be evaluation tests for all pupils in CP (six- to seven-year-olds), CE1 (seven to eight years), sixième (11 to 12 years), and seconde (15 to 16 years). Parents might notice that pupils in other years are also tested as teachers assess who has fallen behind after interrupted schooling.

Half of pupils going into sixième cannot read aloud fluently, so this is high on the curriculum. In maternelle (nursery school) teachers will aim to read a story every day, parents should be lent books to continue at home, and if your child talks about the quart d’heure lecture, they are referring to 15 minutes a day of reading, either in silence or aloud, to be introduced whenever possible in primary schools.

Improving maths skills is also a priority, with the plan mathématiques, which has been in place since 2018, to be continued. It supports a more practical approach to solving maths problems. France has a bad reputation for maths. Data from the 2019 Trends in International Mathematics and Science Study placed it 41st out of 58 countries for CM1 (nine to 10 years).

Elsewhere, schools hope to draw on the 2024 Paris Olympics to encourage more sport, especially as Covid-19 meant many activities stopped.

Primary-age children might come home saying they are doing 30 minutes of exercise a day. This was trialled in some schools last year and is in addition to sports lessons.

Teachers who took part in the pilot scheme say it makes children fitter, and more alert in the classroom. The plan is to introduce it into as many schools as possible.

Covering IT, Pix is a government- funded organisation that has developed teaching methods to improve computer skills for the general public online. This is being used from cinquième (12-13 years) in collèges through to lycées.

There will also be more changes to the baccalauréat this year. The reform, which started in 2019, has been controversial from the start.

Instead of one week of exams in June, 60% is based on exams and 40% on continual assessment, most of which, in the original plan, was from common national tests and 10% from school reports (bulletins scolaires).

Now these tests are to be scrapped and 40% is to be based on school reports, which include results of tests set by individual teachers throughout the year (contrôles continus).

The man who designed the new Bac, Pierre Mathiot, told The Connexion it was common for reforms on this scale to have teething problems.

“It may take years for it to settle down. When we held the new national tests, we immediately understood it was very difficult to organise. We have experience of basing results on bulletins scolaires from the last two baccalauréats, when exams were disrupted by Covid.”

Seven unions, including the biggest secondary school union SNES-FSU, say this will put enormous pressure on teachers and create inequalities because schools do not assess pupils in the same way.

Mr Mathiot says teachers will get training to ensure all marks are as uniform as possible.

“Don’t forget that 60% of the Bac will be judged on national exam results,” he added.

“The new Bac is fairer because it does not depend on students learning lessons by heart at the last minute.

“Instead, they will learn progressively and retain information better. It is the difference between a sprint at the end and an endurance race.”

Aerovillages project in France: Housing estate with planes in garage
20 January 2022
More from Family
More from Connexion
Get news, views and information from France
Join the newsletter
Subscribe to The Connexion