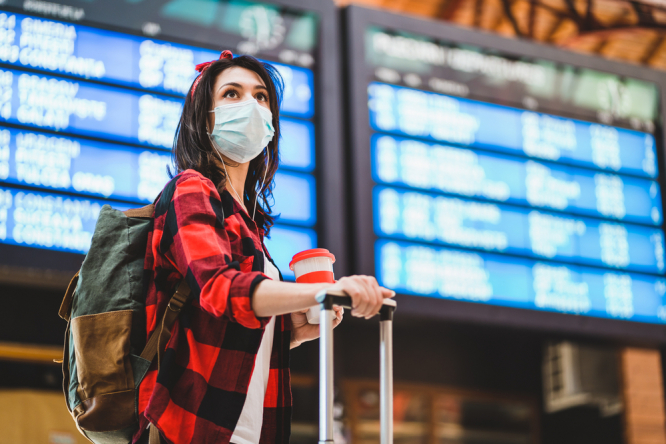 A leading statistics expert has told The Connexion that if the UK government had “really dug into the data available at the time” it would have realised there was no need to maintain quarantine-on-arrival rules for fully-vaccinated travellers from France in July, when it dropped the rule for all other amber-listed countries.

It comes as an expert in tracking Covid variants states that the full data suggests the presence of the Beta variant – said to have been the UK’s main concern – has been receding in mainland France since May, with the proportion of cases only around 1% by the end of June.

What happened in July and August?

The rules, which placed France uniquely on a so-called ‘amber-plus’ list, were announced on July 16 and came into effect on July 19.

On August 4, the UK announced it would be lifting the measures and that France from August 8 would be back in line with all other amber-listed countries.

The government stated: “The step aligns France with the rest of the amber list now that the proportion of Beta variant cases has fallen.” It has not provided any figures to back up this decision, despite repeated requests to the UK's health ministry to supply them.

Also on August 8, French overseas region Réunion (and another French region, Mayotte) was moved off the standard amber list and onto the ‘red’ list. Overseas region French Guiana was already on the red list.

The UK’s initial decision on July 16 was met by surprise by many people, as French health authorities had not highlighted the Beta variant as a problem in mainland France. It had been highlighted as an issue in Réunion located 9,000km from Paris.

Data also appears to show that the UK government included Beta cases from France’s overseas territories when deciding to place France on the amber plus travel list, despite the fact that ‘France’ (in reality mainland France) and all of the overseas regions are listed separately in its ‘traffic light’ colour-code list.

The health ministry in the UK has refused several requests by The Connexion to provide a full breakdown of the data it used to make the decision to place France on the amber plus list, and then to remove it. It also did not state whether it had liaised with French public health authorities. We have asked French health authority Santé Publique France for comment.

GISAID is a data initiative that monitors Covid-19 globally. Individual laboratories around the world submit the results of sequenced Covid-19 tests to the database.

France is using two techniques to track Covid-19 variants. One of them is known as sequencing. This is where laboratoires analyse positive Covid samples to see all of the mutations present. It allows them to see specifically which variant the positive sample is.

France is carrying out ‘flash’ surveys where every two weeks thousands of tests around the country are sequenced. The results are then published a few weeks later.

Beta cases were low in mainland when decision was taken

Emma Hodcroft, a molecular epidemiologist at the Institute for Social and Preventive Medicine at the University of Bern, has been tracking Covid-19 variants and publishing the data online, using data from the GISAID database – the same database the UK government told The Connexion it was using.

She and her team have separated Beta variant samples based on where they were submitted from – whether mainland France or Réunion.

Her data shows that of the total number of Covid samples that were sequenced by France and submitted to GISAID, the proportion of Beta cases had already begun dropping in both mainland France and Réunion by around mid-May.

She said if you look only at samples submitted from mainland France, the proportion of Beta cases peaks at around 12% in late April, before falling to around 1% at the end of June.

If you include samples submitted from France and all of its overseas territories, the proportion of Beta cases is around 5% by the end of June.

At the time the UK government made its decision to place France on the amber plus list this 5% figure was most likely the latest available data.

However it includes cases of Beta recorded in all of France’s territories, which are listed separately from mainland France on the UK’s travel list.

You can see Prof Hodcroft’s data that includes all of France’s territories here.

...and the data that shows only sequenced samples from mainland France here.

The sequenced samples that France submits to GISAID only offer a representative view of the presence of Beta in France, not an exhaustive one. However, Prof Hodcroft said that the picture it presents is likely to be accurate.

Professor Sylvia Richardson, president of the Royal Statistical Society and professor of biostatistics at the University of Cambridge, said she thinks the UK government could have anticipated the trend that the proportion of Beta cases was dropping if it had carefully analysed the data and liaised with French public health bodies, in order to clarify if the variant counts concerned mainland France or other territories like Réunion.

“Because there is a lag between data being published, the government probably only saw that overall the beta variant was accounting for 5% of sequenced cases up to the end of June,” she said.

“But there were indications that the proportion was dropping, for example they could see that everywhere in the world Delta was taking hold and Beta was not managing to compete due to its lower transmissibility.”

“It is concerning that they didn’t query that,” she said.

“The government has not admitted to the fact that there was maybe some confusion over if the data was coming from mainland France or Réunion, and we can only speculate.”

She said that the published French data possibly did not fully separate data coming from France or other territories at the time the UK made the decision, which could have contributed to confusion.

“I think it’s a combination of the French data not clearly separating between the mainland and Réunion up to the end of June, and the UK government not querying the data for mainland France,” she said.

The Royal Statistical Society has publicly demanded the UK government to release more data supporting its decision to place France on the amber-plus list.

“When an important policy decision is made, the data on which it is based, and the balance of risks should be made clear,” Prof Richardson said.

“Transparency is important for two reasons: It improves accountability, and it makes it easier to spot and rectify mistakes.”

The UK’s decision to place France on the amber plus list affected potentially thousands of people living between the countries.

Many readers wrote in to express their disappointment.

One reader wrote in to say that the decision to place France on the so-called amber plus list “ridiculous”, saying he was “sick and tired” of the constant rule changes.

He said his planned trip to the UK was greatly affected as he had to quarantine for 10 days on arrival, despite being fully vaccinated against Covid-19.

Another reader said he had written to the British Ambassador in France to demand an explanation for the decision.

“I have to visit my 100-year-old mother in England to support her physical and mental well-being. I cannot do this and endure a 10-day quarantine every visit,” he said.

He added that he saw “no justification” for the decision.

Another wrote to say she and her husband were becoming increasingly upset at the UK government.

“When we first heard that France had been put on the amber plus list we were very upset and surprised because we already knew that mainland France's Beta variant numbers were circulating at a low level,” she said.

“I know I'm not alone in feeling frustrated and upset about the unfairness of this because the British Embassy in Paris was inundated with expats messaging to say that it was wrong and unfair."

“There were some very sad stories regarding people not being able to be with their families, attend funerals, be with dying relatives,” she said.

Lord Peter Ricketts, former UK ambassador to France, said he could not understand the UK’s reasoning with regard to imposing quarantine-on-arrival for vaccinated travellers specifically from France.

“I've seen no credible explanation,” he told The Connexion on July 29.

What does UK government say?

A spokesperson for the transport ministry in the UK directed The Connexion to data published publicly by the Joint Biosecurity Centre (JBC), a UK institute providing data upon which the government bases its decisions, upon which UK government travel rule decisions are based.

However, data on France is not included in the report. When The Connexion pointed this out to the Department for Transport, we were told we would have to ask the health ministry for the data.

The report contains no data on Covid variants for any of the countries included, stating that the data has either been “suppressed” or there is “no data”.

The Connexion was provided with the following statement by the UK’s health ministry:

“The Joint JBC assessed that France is a high-risk Covid-19 destination due to the circulation of variants of concern, most notably the Beta variant, which is the variant t at presents the greatest risk for vaccine escape.

“With England reaching step four of the roadmap, and restrictions easing for double vaccinated travellers, the government’s top priority is to stop the spread of Covid-19, including protecting our borders from the threat of variants.

“The decision to add countries to the red, amber or green lists is made jointly by ministers, informed by the latest scientific data and public health advice and taking into account a range of factors.”

The health ministry has also stated that the data it uses distinguishes between data from mainland France and overseas territories – the data The Connexion analysed appears to contradict that.

UK foreign secretary Dominic Raab meanwhile stated on TV on July 29 that the decision to place France on the amber plus list was based notably on the prevalence of the Covid Beta variant in Réunion.

UK minister’s statement on Covid and Réunion was flawed

Why did France not place Réunion on amber plus list instead of mainland?

5 hours ago
4
Map: in which French departments are Covid cases rising?

21 hours ago
5
Which supermarkets in France have the most offers, deals and promos?