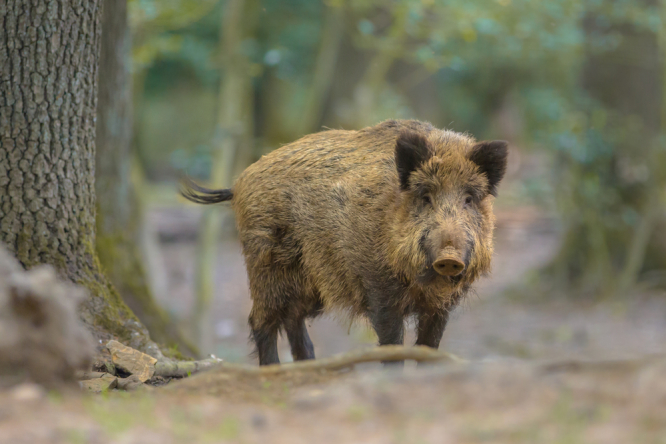 A wild boar ran into a public swimming pool in a town in Cher, breaking the door Pic: Rudmer Zwerver / Shutterstock

A wild boar caused panic in a public pool in the town of Saint-Amand-Montrond (Cher) when it crashed into the building in an attempt to escape from a hunt.

The incident, which happened last Sunday (September 26), has revived a debate about wild boar populations and the hunting of the animals in France.

No one at the swimming pool was injured, but the manager of the centre wants the hunters to pay for damage to the door as he believes the boar only entered the building out of fear of the hunters.

"What saddens me the most is that [the hunters] did not take responsibility for the incident," Patrick Foucault told local news publication the Berry Républicain.

“How can you organise a hunt in the direction of a site frequented by the public? It's really inadmissible, scandalous", he said.

The public pool is located at the edge of a forest.

The number of wild boars has increased rapidly across Europe since the 1990s, a 2018 report by the European Landowners Organization found.

In France, there are 1.6 wild boars per square kilometre, which equals more than a million in total, the report shows.

Several factors are mentioned to explain this increase: a lack of predators (except wolves), rapid reproduction, less cold winters, or human activities. The latter is linked to wild boars being pushed towards agricultural areas where they find more food.

Climate change is also thought to be responsible, as it favours the production of wild fruits such as acorns and chestnuts, which wild boars love.

Another factor that has proved highly contentious is hunting.

A wild boar specialist at the French Office of Biodiversity (OFB), Éric Baubet, has said that hunters have encouraged the increase of the animals.

"In the 1960s, the basis of hunting was small game. But this collapsed, so hunters turned to big game. The wild boar was a kind of blessing, and the hunters did what they could to increase the population,” he told ecological news publication Reporterre.

“If you spare the big females, who have more young, the population will quickly increase,” he said.

"It is not the hunters who cause the increase in the wild boar population, but all the other factors, especially the abundance of food,” it states.

Hunting and the wild boar population in France continue to be highly contested issues, and this latest incidence will only add to the debate.