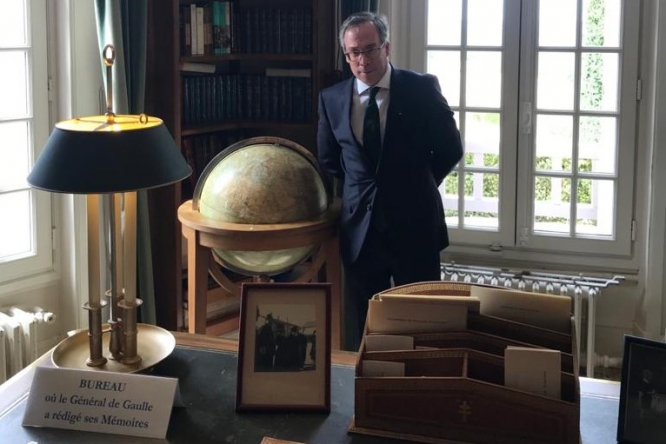 Here in France, my diary has been full with catch-ups with politicians, opinion-formers, businesses and ministers – all socially-distanced, of course. It’s important to maintain contact with our French colleagues, despite the practical challenges of Covid.

At the start of the month, I made my first official trip outside Paris of the rentrée. In this “Year of De Gaulle”, I was determined to visit the General’s beloved home in Colombey-les-Deux-Eglises. I laid a wreath at his grave and stood in his study. Photos of the Queen and Churchill looked on from the shelves. I could feel the weight of French – and European – history. I then went on to Troyes, for the opening of an exhibition celebrating the treaty which briefly united the French and English crowns that was signed there 600 years ago. The day was a fascinating reminder of the long and intertwined history of our two countries and peoples.

Of course, two major subjects running throughout my month have been the end of the transition period, and the rights of British people living in France. It now appears that the French government’s residency permit website will be opening a little later than planned in October, as the legislation setting out the exact policy still needs to go to French ministers – a casualty of Covid and a busy government agenda. I’m holding a series of meetings with senior French officials this week and will ask for further details.

I want to reassure you that this is not about politics and that the French government assure us that they remain committed to a generous approach in processing applications once the system does open. And, of course, as I write, the negotiations continue in London and Brussels on our future relationship with the EU.

I know that the issue of UK bank accounts has been on many minds and I wanted to share the latest information I have on the subject. Whether banks can serve customers based in Europe after the end of the transition period depends on local law and regulation in each country, on how the bank is set up, and on the steps they’ve taken to continue to serve customers.

The government is clear that banks should be communicating directly to customers who may be affected. However, if you have questions or require financial advice, your first step should be to get in touch with your bank or financial adviser.

Looking ahead to the autumn, the Covid situation remains grave, with the number of cases across France significantly high. The French and British govern­ments have announced measures to address rising
num­­bers on both sides of the Channel.

I’m aware that the continuing quarantine measures are a source of frustration and difficulty for many of us missing our families. However, for the time being, we must redouble our efforts to stem the spread of the virus and follow the advice given by both governments, as the hunt for a vaccine continues apace. As we head into the autumn, as the nights draw in, no doubt many of us are already feeling nostalgic for the summer – beautiful though the autumnal leaves are here in Paris at the moment. A time to remember perhaps, the words of William Wordsworth – “Departing summer hath assumed/An aspect tenderly illumed/The gentlest look of spring”. A reminder of the inexorable passage of the seasons – both literally, of course, but also in a broader sense.

After the winter will come the spring. There is no doubt this is a difficult time, as we go through an unprecedented global pandemic. But spring will return; better times lie ahead.