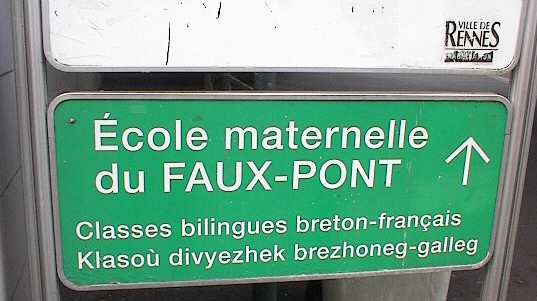 Sign in French and Breton in Rennes, outside a school with bilingual classes
By Connexion journalist

France approved yesterday (April 8) a new law aimed at protecting and promoting regional languages across the country. It is the first new law related to regional languages since the creation of the French Fifth Republic in 1958.

It will give primary schools the possibility of “immersive teaching” in a regional language, meaning they can offer teaching in a specific regional language for the majority of the school day.

The French language would be introduced gradually until the pupils are completely bilingual by the end of primary school.

The law also proposes the “generalisation” of learning regional languages in schools at all levels, from nursery to high school.

It is a different option to the current systems in bilingual, international schools or Diwan schools, which are schools where education is provided in the Breton language.

Another element of the law states that local authorities will need to provide a financial contribution to pupils who wish to be educated in a regional language when it is not possible to do so in the commune where the pupils live.

The bill was backed by a majority of MPs at the Assemblée nationale - 247 for, 76 against and 19 abstentions, having already passed through the senate.

Paul Molac, the MP for Morbihan in Brittany and the author of the bill, welcomed the vote.

“It is historic: for the first time in the history of the Fifth Republic, a law on regional languages has been passed,” he Tweeted after the decision.

“The dedication of associations, local elected representatives and the tenacity of parliamentarians has paid off. This is a great day for our languages.”

“The Regions, which are responsible for preserving and promoting regional languages, will now ensure the implementation of this historic law on the ground, particularly in secondary schools,” it wrote in a press release.

“We [Régions de France] are at the disposal of state services, municipalities and departments, associations and educational communities to carry out this mission. There is an urgent need to protect our regional languages, which are in great danger of extinction!”

Bastien Lachaud, MP for left-wing political party La France Insoumise, criticised the bill and those supporting it during the parliamentary debate.

“So to say today that we're going to do immersion without giving the means to the national education system to do it is more wishful thinking.”

After the vote, Mr Molac and his colleagues from Brittany gathered on the steps of Palais Bourbon, where the Assemblée nationale gathers, to sing a rendition of Brittany’s anthem Bro Gozh ma Zadoù (old country of my ancestors).

There is no up-to-date or exact data on how many speakers of regional languages there are in France.