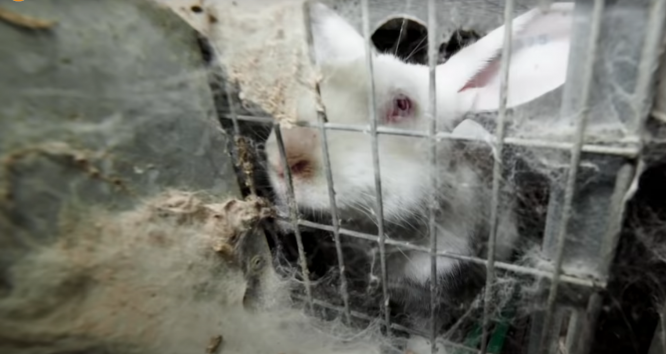 A graphic video showing rabbits kept in poor conditions for breeding at a facility in the northwest of France is the subject of animal rights group L214 Éthique et Animaux’s latest video.

The campaign group is known for releasing disturbing footage of animal rights abuses in France to encourage ending the mistreatment of animals.

According to the group, 99% of rabbits in France live in intensive breeding farms and nearly one quarter die during rearing processes.

The video, released on Tuesday (September 29), was published in advance of a National Assembly debate on a law aimed at protecting animals in France and ending intensive breeding practices.

The law was proposed by MP Cédric Villani of the party Écologie, Démocratie, Solidarité (EDS) and will be debated on Thursday (October 1). If it is adopted it will be passed to the senate, France’s upper house of parliament.

The law takes measures that were initially proposed as part of a drive to have a citizen’s referendum on protecting animal rights in France.

The referendum has been backed by 140 MPs and over 700,000 people online. You can read more about the citizen’s referendum here.

L214 Éthique et Animaux is one of the groups supporting the citizen’s referendum. It’s co-founder, Brigitte Gothière, tells Connexion about their new video, the possible new animal protection law, and what people can do to support animal rights in France.

The latest L214 video shows the shocking state of captive rabbits. Why are rabbits raised in such awful conditions and why is nothing done about it?

There is no specific regulation concerning the breeding of rabbits in France, which means that there are no regulations for the minimum size of a cage, or things like that. So if an inspector goes to view the breeding areas there is not much they can say.

That’s why we have made a legal demand to improve their rights. Legally, this type of cruelty towards animals is institutionalised. It is not questioned by the law.

There are different types of cruelty towards animals.

There is the cruelty that comes from an individual who purposefully and willfully hurts animals.

Then there is the structural mistreatment of animals, which we have on a big scale for animals that are bred.

This is where the condition of breeding is in itself cruel, where it does not respect the animal’s biological behaviour.

And that is a lot more insidious, and a lot harder to quantify because there is no willful act of mistreatment by one person. it is [seen as] banal, or normal. And so we have a lot of difficulty in questioning a situation that is set up like this.

What do you think of the news that France will gradually ban travelling circuses with wild animals and aims to ban mink breeding?

It’s a first step that is very interesting. It has been a long time that we haven’t made any legal progress on this front, so it’s good news. But it should not slow down progress on the other measures, the work is not finished.

It is good, especially because of the strong words [minister of ecological transition] Barbara Pompili used, saying the laws were a ‘major turning point for wild animals in our society’. It’s very strong.

Could you tell me about the proposed law that will be discussed at the National Assembly on Thursday?

It is based on measures proposed in the citizen’s referendum for animal rights that was launched in July.

There are four main parts. Two should pass very easily because Ms Pompili has already announced a ban on breeding minks and a ban on using wild animals in circuses and dolphin aquariums.

There are two other measures. One is against the most cruel hunting methods: Hunting with hounds, underground hunting, glue trap huntings etc.

That will be more complicated as there is a very powerful hunting lobby in opposition and they still have the ear of many MPs, despite the fact that, even in the countryside, the majority of people are against hunting.

This is a proposition that has, in principle, the most support among French people, with around 88% saying they do not want this type of breeding.

The proposal is for this practice to end by 2040, including a support fund to aid breeders.

Despite that, we think there will be a strong resistance to prevent this measure being taken.

Connexion spoke to representatives of France’s national and regional hunting federations for an article published in our October print paper. An extended version of this will be made available online soon.

What is the latest news about the citizen’s referendum?

We are waiting a little bit to see how it goes with the proposed law at the National Assembly.

We have around 140 MPs who have committed to supporting the referendum.

It includes more or less the same measures as the proposed law. The difference is that the referendum includes a measure to end experiments on animals where there are other alternatives.

What can people do to support animal rights in France?

There are a lot of things to do. If they are registered voters in France they can contact their MPs.

In our daily acts we can also help animals by choosing to stop eating products that come from animals: We encourage people to adopt a vegan diet.

They can also participate in actions that we organise through our website.