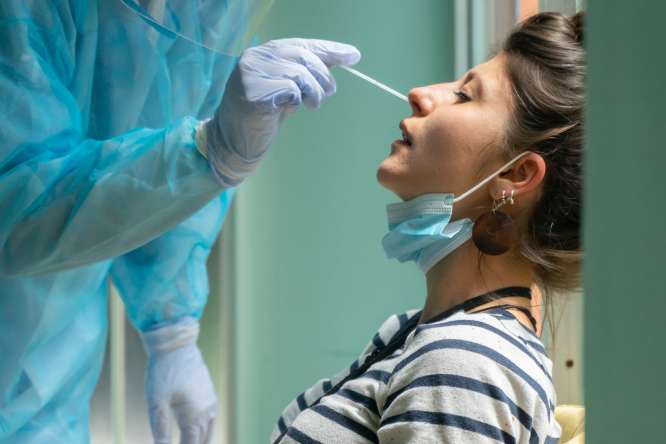 Epidemiologists in France are calling for the reintroduction of free Covid tests as infection rates rise across the country.

France saw an average of 10,000 new cases each day last week, with the positivity rate of Covid tests rising to 3.4%.

Yesterday (November 16), nearly 20,000 new cases were recorded by Santé publique France and the positivity rate rose to 3.7%. There are currently 7,535 people in hospital with Covid – 1,277 in intensive care – and 647 have been admitted since Monday.

On October 15, Covid tests became payable in certain circumstances. For example, unvaccinated people who do not have a doctor’s prescription and who have not been identified as a close contact of a confirmed case must now pay €44 for a PCR and approximately €25 for an antigen test.

Read more: ​​Covid tests in France: Who has to pay from today and how much?

The government’s decision to make ‘comfort’ tests, including tests needed for travel, payable was taken in part to encourage those yet to be vaccinated to do so, seeing as they would no longer be able to use free tests to obtain a temporary health pass.

In effect, the number of people receiving their first vaccine dose continues to fall day by day, with just 2,012 injections being carried out on Sunday according to government-approved dashboard VaccinTracker.

There remain six million people in France who have not yet received their first dose, and the number of tests being taken has also fallen rapidly since charges were introduced.

Between August 9 and 15, with the imposition of the health pass requirement, around six million tests were carried out in France. However, in the week of October 15 there were 450,000, and last week there were fewer than 300,000, according to Orange Actualités.

This huge reduction in the number of tests taken is only partly due to the new charges: as the proportion of vaccinated people grew over the summer, fewer people needed to use tests for their health passes, and so demand has been gradually falling for some months.

However, the introduction of payable tests has led to a drop in the number of asymptomatic people who are getting tested, which could mean that – although asymptomatic cases are rare – recorded infection rates underestimate the reality of the situation in France.

Santé publique France has told Le Monde that “the impact on infection rates has been minimal” so far.

To combat a surge in Covid cases the German government has recently decided to return to free tests, and some experts are calling for France to do the same.

“Since free Covid tests were rolled out, certain people have taken advantage, having multiple tests in order to get their health pass. In this case it is normal that these ‘comfort’ tests should not be free,” epidemiologist Mahmoud Zureik told L’Express.

“But what we have been seeing recently is that [making tests payable] for the health pass to motivate people to get vaccinated is no longer working.

“In the context of a resurgence of the epidemic, tests should be quickly accessible from the first appearance of symptoms, regardless of one’s vaccine status,” Prof Zureik told Le Parisien.

“Allowing positive cases to go undiagnosed or diagnosed too late increases the risk of the virus spreading further within the population.

The Health Ministry has since announced that the reinstatement of free tests is “not on the cards,” since a “huge majority” of French people can still benefit from them.

The Ministry also stated that the situation is more serious in Germany, where the number of positive cases has risen above 50,000 per day this week and fewer people are vaccinated (67.5% of the population compared to 74.8% in France).

Who can still get a free test?

You can still access free tests if you are:

What will cost be when free Covid tests end in France on October 15?