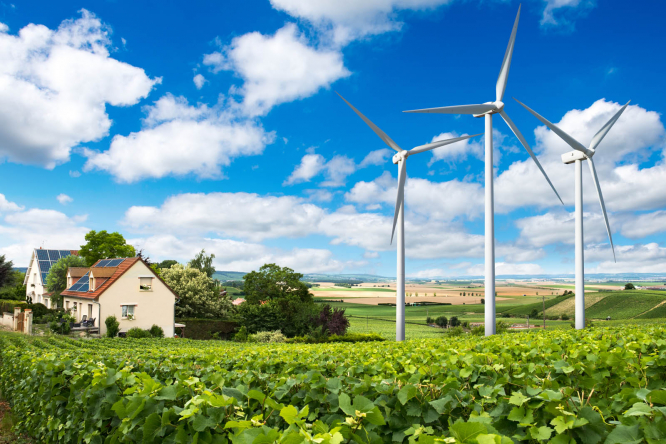 Mayors must be consulted on the installation of local wind turbines under a new law but will not be able to veto them, as first proposed by the senate.

The text, which forms part of a new climate bill, was moderated after opposition by MPs.

The bill, which then passed a final vote, aims to put into law at least some of 146 proposals made by the Convention citoyenne pour le climat to reduce greenhouse gas emissions by 40% by 2030.

This citizens’ think-tank convened by the government favoured use of renewable energies such as wind turbines, but some mayors feared they would have no say in new projects.

André Flajolet, mayor of SaintVenant, Pas-de-Calais, and head of the environment commission for the Association des Maires de France (AMF), which wanted a veto right, said: “The state cannot say it supports decentralisation if it continues to make decisions in the place of mayors.

“AMF supports renewable energies but we recognise there are problems in terms of health, the environment, preservation of the landscape, local heritage and distribution of financial gains and so far there is no satisfactory way of recycling them at the end of their life.” Wind farm operators complain that only 20% of metropolitan France is now suitable for turbines due to a new 70km no-go area around military bases, rules limiting placement to 500m from homes, limits near military and civil airports, and bans in Natura 2000 reserves.

Giving mayors veto rights could have hit Environment Minister Barbara Pompili’s aim, published in 2018, to double the number of wind turbines by 2028, meaning some 6,500 new turbines.

Around 400 mayors have formed an anti-turbine campaign group called Vent des Maires, and a 600-member association in the Aisne, SOS Danger éolien, claims that wind turbines cause health problems to residents.

Television presenter Stéphane Bern has become a vociferous opponent, criticising an overly “anarchic” siting of turbines and an “ecological calamity”.

He wrote in Le Figaro: “Wind energy seriously pollutes nature and destroys the natural and architectural heritage in France, those sites known for their remarkable beauty and the architectural jewels for which we are collectively the custodians, and which are disfigured by wind turbines.”

His views were backed by farright politician Marine Le Pen.

The right-wing president of the Hauts-de-France, Xavier Bertrand, a candidate for the 2022 presidential elections, says he would prefer nuclear power stations to more wind turbines in his region, which has the most wind farms in France.

At a press conference, she said 90% of the mass of an old wind turbine and its foundations has to be recycled, a percentage which will rise to 95% in 2024.

She added that a study by IRSN, an official agency looking into health effects of emissions, showed 82% of French people in favour of wind power.

In recognition of some public opposition, she suggests consulting with all parties to draw up a new agreed map on where wind turbines can be installed.

Prefects have been asked to consult with local authorities and outline suitable zones.

Her ministry has published a list of 28 of the most common arguments against turbines and why they are wrong.

One of the pioneers of the French wind turbine industry, Paul Neau, whose environmental consultancy Abies works for turbine companies, said he was confident public opinion could be turned strongly in favour, especially when people realise how much cheaper windsourced electricity is.

“In France, the nuclear power lobby is strong but people have little idea of just how expensive nuclear is, compared to wind power – over double the price per Kwh for new nuclear power stations, which also have tremendous technical problems,” he said.

Politically, he said the fact that anti-wind turbine groups were now clearly supporting farright parties, as was shown in the regional elections, meant it was now difficult for moderates and environmentalists to be anti-wind turbines.

“It is important that people focus on the environmental benefits of wind power, and if we do that, we will see more clean electricity come from it.”

10 hours ago
2
Map: Gastro outbreaks on rise in France - which areas are worst hit?