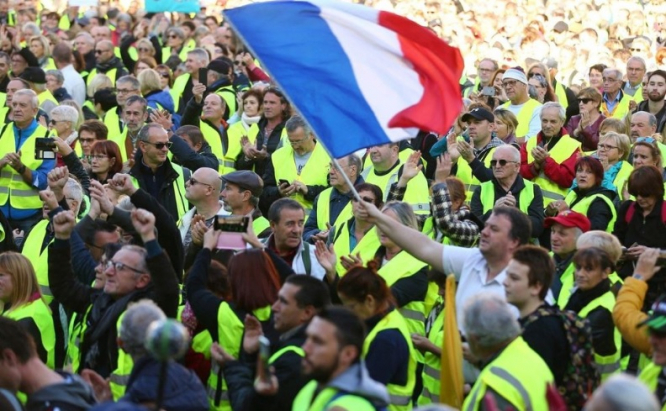 The woman - a 63-year-old Savoie resident, named Chantal Mazet - was run over by a driver who was taking her child to the doctor. The driver accelerated in panic when protesters began tapping on the roof of her vehicle, hitting and killing Ms Mazet.

The driver was later taken into police custody in shock.

Seven other people were seriously injured, with 227 other injuries recorded. There were 117 arrests and 73 people were later taken into police custody, according to figures from the ministry of the Interior.

Official numbers put the numbers of overall protesters at 282,710 - although certain demonstrators have already contested this figure.

Protesters are demonstrating against rising fuel costs and the planned increases in tax expected in 2019.

Some blockades had still not been lifted late in the evening, and protesters were present at over 1,400 demonstration areas. Some protesters were planning to camp overnight and continue the movement into today (Sunday November 18).

Some organisers have said that they are planning to maintain their protests in place for longer.

Gaëtan, one of the organisers of a protest Facebook page based in the Haute-Garonne, said: “There is a strong change that the movement will continue. Blocking roads for just one day is ridiculous, if we want to be heard by the government, we have to keep going.”

Authorities said that on Saturday night, some molotov cocktails - homemade explosives - had been thrown at law enforcement officers in some part of the country.

They warned that continuing to protest at night was very dangerous, and that people risked “being run over by a vehicle”.

High-profile members of opposition political parties Les Républicains (LR) and Le Rassemblement National were present at some protests, including Laurent Wauquiez and Jean-Luc Mélenchon in Paris.

Mr Wauquiez called on President Emmanuel Macron to “correct his errors”, while Mr Mélenchon wrote that the government had “manipulated the figures” and “dramatised” the protests.

Interior minister Christophe Castaner said: “I call on the responsibility of those who are organising these demonstrations. They have brought a clear message. It has been heard.

“The government is alert to all demonstrations, and we must now continue to respond to the wishes of the French people, including when it comes to buying power.”

This week, Prime Minister Édouard Philippe announced a series of measures and grants that the government hopes will make fuel more affordable.

Yet, the minister for Ecological Transition said the government would not stop the planned increase in diesel and petrol taxes, due to come into force on January 1, 2019.

In an interview with Le Parisien newspaper, he said: “We are continuing to follow the agreed trajectory. If France elected Emmanuel Macron, it is so we can end the current status quo.”

From January 1, taxes are expected to rise by 6.5 cents per euro per litre for diesel, and 2.9 cents for petrol. Taxes this year have already risen by 7.6 cents and 3.9 cents respectively.

The price of diesel has risen by around 23% in the past 12 months, its highest level since the early 2000s, according to the Agence France-Presse.

President Macron has blamed the rising fuel costs in France on the global price of crude oil, and accused protesters of derailing his reform plans - although earlier this week he did concede that he had “not managed to reconcile the French people with their leaders”.