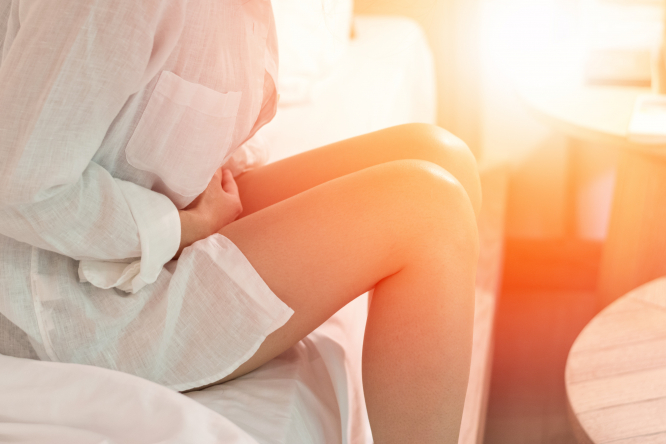 Endometriosis is a condition where the lining of the uterus grows elsewhere in the body, causing debilitating pain and suffering Pic: BlurryMe / Shutterstock

President Emmanuel Macron is to launch a national strategy to combat endometriosis, a painful and debilitating condition that affects one in 10 women in France and is the leading cause of infertility.

The national plan will aim to boost understanding and awareness of the issue, as well as improve diagnosis rates and treatment plans.

Much of the plan has been developed based on the work of MEP and gynaecologist Chrysoula Zacharopoulou, who has been working on the condition for years and this week submitted her latest report on how governments can help.

In a video posted on social media, Mr Macron said that the subject was “close to my heart and has been on my agenda since 2017”.

He said that for millions of women, “everything is made more difficult by this illness…they are exhausted by pain that can even cause them to pass out…which stops them from standing up, sleeping, doing sport, doing their work”.

The president said that resources would be allocated to enable the country “to rise to the challenge” of fighting the illness, to “better understand it and its causes, and to find effective treatments”.

He said it was “time” to speak about it to “break the silence”, “time to act to make it easier to access care”, and “time to invest so that researchers can explore the causes of the illness” and create a national research programme, to bring together all the current resources.

He said: “France can and must take the lead [in this research].”

What is the plan to help improve diagnosis and care?

Each region will be allocated at least one centre of expertise in the condition, helped by national funding and links with existing associations. The programme will also look into creating a “body” of research teams that would closely study the “incidence, the factors, and the consequences of the illness”.

Mr Macron said that the goal was for healthcare professionals and members of the public “to develop what could be called an 'endometriosis reflex' and awareness, wherever the condition could become debilitating, including at school, university, at home, at the office, and in medical circles.

Mr Macron added that “health professionals must be trained to better recognise the illness and use the treatments available”.

The president also thanked the “irreplaceable roles played” by all the doctors, ambassadors, researchers, associations, and expert patients “who work relentlessly” to raise awareness of the illness, and who “helped to build this strategy and will help us take it nationwide”.

Mr Macron said that Health Minister Olivier Véran would soon gather a dedicated committee to “define the action plan” and help implement it to patient and professional associations, and to “all the ministries and sectors concerned", he added.

The first committee meeting is set to be held in February.

Video carries testimonials from women who have the condition

Mr Macron said: “This project holds hope for a better quality of life for two million women. Those are enough reasons for us to fight, all together. It’s our hope and our duty.”

The president also posted another video featuring testimonials from women who have the condition, and a man whose partner is affected.

Their comments include: “You can’t even imagine it. It hurts, it spreads throughout your entire body…I first got symptoms at the age of 14, but wasn’t diagnosed until the age of 30.

“We are suffering enormously. I was afraid of my period arriving. It’s very strong, sharp pain that causes me to have to lie down. Endless bleeding, dizziness, vomiting, passing out.

“It’s a chronic illness, so we’re tired all the time. And diagnosis still takes too long. It is so important to be listened to, and supported.”

Endometriosis is a disorder where tissue that usually lines the inside of the uterus grows outside the uterus, usually in the ovaries, fallopian tubes and pelvis. It can cause pain, bleeding, irritation, scar tissue, and even fibrous adhesions that can cause organs to stick together.

It can be difficult to diagnose and it still takes an average of seven years before women are diagnosed correctly. The condition is often confused with irritable bowel syndrome (IBS) or pelvic inflammatory disease (PID).

This can lead to women suffering for years without knowing why, or how to treat their condition, and even the current treatments can be ineffective, and cause side effects such as weight gain and hair loss.