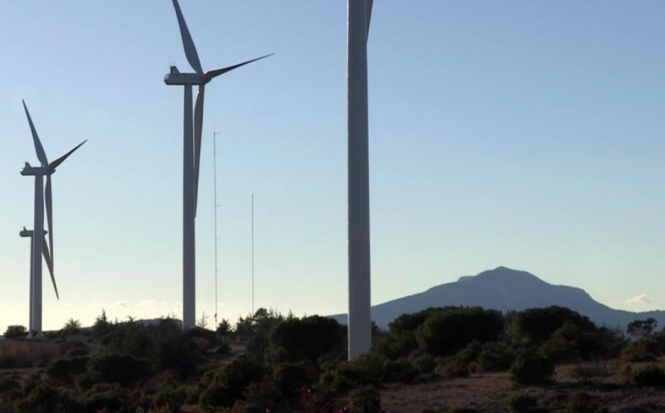 The wind farm is located near Sainte-Victoire mountain in Var, on a recognised nature site Pic: TF1LeJT / @TF1LeJT / Twitter

A court has ruled that 22 wind turbines in south France are illegal and should be removed.

Judges from an administrative court in Marseille found that the developer of the wind farm failed to get environmental authorisation to install the 125-metre-high turbines and thus the wind farm is illegal.

But their removal is not yet assured as the prefecture in Var is keen to keep the 22 turbines.

In May 2020 it signed an order giving the developer, Provencialis, one year to provide documentation showing it had made an application for environmental authorisation.

The company already provided some environmental documentation in support of its site in 2011 - but courts found the dossier to be invalid.

Not only did the company provide the documentation after an agreed deadline, but in 2010 stricter environmental laws came into place.

The courts ruled that the company must now comply with the newer laws, which entail a stricter study of the site before environmental authorisation can be given.

The 125-metre-high turbines are located near Sainte-Victoire mountain in Var, a landscape that was often painted by the post-impressionist artist Cézanne.

The area is home to many protected plants and types of bird which are at risk from wind turbines including the golden eagle, Bonelli’s eagle, the booted eagle and the short-toed snake eagle.

It entered into the Grands Sites de France network in 2004 - a label given to sites that run successful rehabilitation programs and allow people to visit in ways that benefit the surroundings.

It also became a Natura 2000 site in 2014, meaning it is recognised by the EU as a nature protection area.

Opponents have said the order from the prefecture is an unacceptable political intervention in the law.

Julien Lacaze, manager of the association Sites et Monuments, told newspaper Le Figaro that the court ruling was a “rare victory”, which had now become a “Kafkaesque situation”.

Francis Monamy, lawyer for Sites et Monuments, said: “Without the May 2020 order from the prefecture, the wind farm would have been stopped during construction.”

But, the same Marseille court that ruled the wind farm was illegal on March 31, 2021, also ruled that the prefectorial order was within the law and should be maintained.

As such, Provencialis now has until May 24 to submit their paperwork and - possibly - save the windfarm.

But a final decision will take time.

After the application for environmental authorisation is submitted, an investigation will be conducted into the impact of the turbines on surrounding plants and wildlife.

Only after this can a decision be made about whether they should be removed or not.

6 hours ago
4
Map: in which French departments are Covid cases rising?

22 hours ago
5
Which supermarkets in France have the most offers, deals and promos?