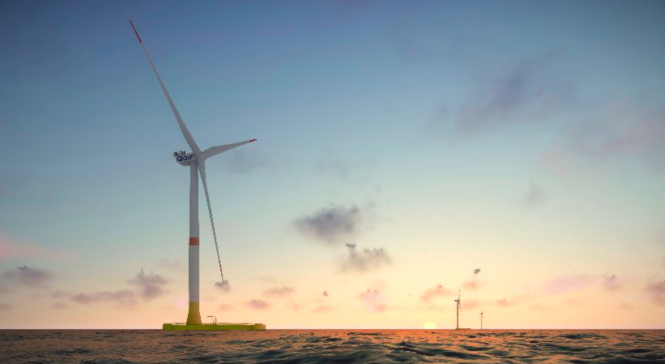 Energy company Total announced yesterday (October 7) that it is taking a 20% investment in an experimental, off shore windfarm project called EolMed.

The wind farm will be installed 18km from the coast near Porte-la-Nouvelle (Aude, Occitanie), and will contain floating wind turbines that are 150 metres high, with blades 100 metres long.

The 15-megawatt turbines are five times stronger that their on-land counterparts. Qair, a specialist in renewable energy that is running the project, hopes that by 2022 the three 10 megawatt engines will be operating thanks to the offshore farm.

Paul de la Guérivière, director general of Ideol, which operates France’s only existing floating windfarm, told news source Le Figaro: “Floating wind turbines have almost unlimited potential along coastlines where the best and most stable winds are. Free of constraints that they have on land, offshore wind turbines can be placed out at sea, far from view, where there is less conflict with other professionals who use the sea for work.”

Ecology agency l’Agence de la transition écologique (Ademe) says the size of the French coastline and the resources available mean France has the potential to build an industry that generates up to 160,000 megawatts of energy. This is more that the total capacity of French energy production using existing technology.

However, Ademe predicts that France is more likely to initially build an offshore windfarm industry that produces 33,000 megawatts of energy - half of what is currently produced by nuclear energy.

As France has a large coastline, it predicts that producing this much energy will use only 2% of the country’s seas.

Plans are in the pipeline for many more floating windfarms in French seas by 2030.

The French government will launch a call for tenders at the end of 2020 or early 2021, for commercial offers to install a 250-megawatt floating windfarm off the south coast of Brittany. Additionally, two floating wind farms of a similar size are planned in the Mediterranean in 2021.

Similar projects have also been launched in other locations around the world with good coastal access including Scotland, South Korea and California.

That being said, the floating turbines are not without some complications. It is impossible to fish near them as they are held down with cables and anchors.

It also takes considerable technical expertise to install and maintain the turbines, especially if repairs need to be done in stormy conditions.

Much depends on the stability of the floating devices they stand on.

Vinvent Balès, director of French offshore operations for electricity company WPD, told Le Figaro: “In order to optimise their productivity, the wind turbines redirect their blades, which we call their pitch. We have to make sure they are as stable as possible so that they can keep the right pitch in spite of sea swells.”

If the turbines cannot maintain the right pitch, they become less productive and less cost-effective.

At the moment, Mr Balès says, the technology for floating devices is like “the wild west - there are many different technologies available”.

However, France is a leader in this field. Of the four technologies currently in use globally, three are French. The existing French wind farm run by Ideol uses concrete floating devices, which have also been exported to Japan.

The expense of developing this new technology is also an issue. Calls for tender in France are being supported by government subsidies on repurchasing prices. It is hoped that this will support development in the green energy sector, with the European goal of carbon neutrality by 2050 in mind.

Calls for tender have also been designed to support local economies, with criteria stipulating that a certain percentage of production must be done locally. In Brittany, €650million has been invested into local construction and assembly of wind turbines.

Cédric Le Bousse, manager of offshore renewable energy for electricity provider EDF, told Le Figaro that, over time, costs should “go down thanks to the structure of the industry developing, technologies maturing and improvement in installation methods”.