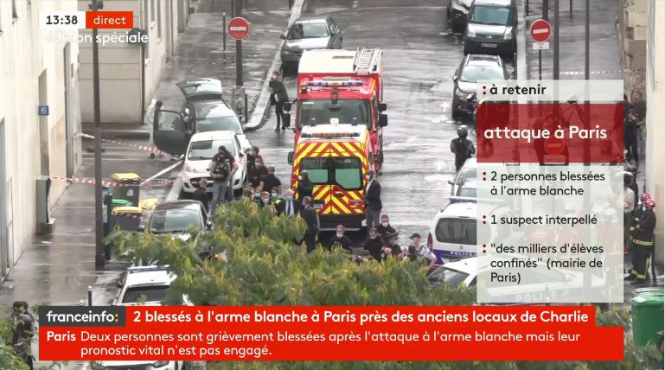 At least two people have been seriously wounded in an attack in which the suspect used either a machete or a meat cleaver, FranceInfo reported.

The incident took place Friday, 25 September, in the 11th district in Paris, close to the former offices of satirical magazine Charlie Hebdo.

Police are asking people to avoid the area around Place de la Bastille. Five schools in the nearby area have been locked down with pupils being kept inside.

"A stabbing attack was carried out in front of Charlie Hebdo's former headquarters," said Prime Minister Jean Castex, "leaving four people injured, two of whom are apparently in a serious condition.”

This month marked the beginning of a trial of 14 people alleged to be accomplices of the brothers.

The attack was linked to the magazine publishing a series of cartoons of Muhammad, a Muslim prophet who, according to the faith, should not be depicted in photos, drawings, sculptures etc.

Earlier in September, Charlie Hebdo republished the images to mark the occasion of the trial.

This week, Charlie Hebdo's head of HR Marika Bret was forced to leave her home due to threats.

Over 100 media outlets in France published an open letter this week calling for France to mobilise in support of freedom of expression and to back Charlie Hebdo.