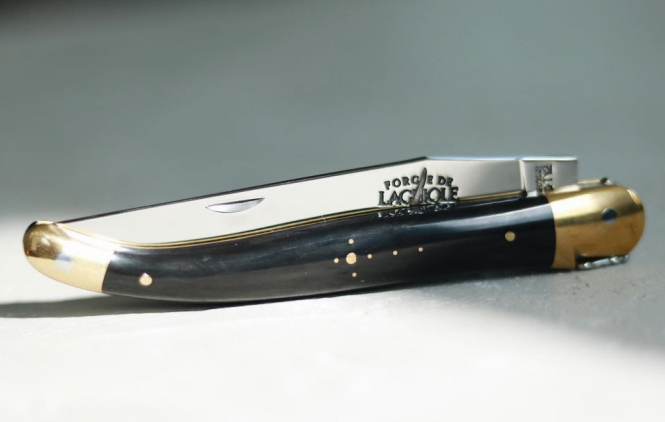 Manufacturers of the famous French steak knives Laguiole are fighting to achieve “indication géographique” status, to protect the brand from low-quality counterfeit copies from China and Pakistan.

Laguiole is a village in Aveyron, in Occitanie; and together with nearby town Thiers, is the birthplace of the Laguiole steak knife. Classic Laguiole knives are often “pocket knives” that fold in the middle, with a bee or insect on the backspring.

The word “laguiole” itself is not yet a trademark, meaning that so-called “laguiole” knives have proliferated in recent years, using low-quality materials and manufacturing processes.

This has led to the village calling for official “indication géographique (IG)” status. This status is for manufactured goods, and means that only goods produced in a certain area can be granted IG status as genuine products.

The call comes from the Aveyron manufacturers which have submitted the claim to industrial property authority l'Institut national de la propriété industrielle (INPI).

A public enquiry is set to continue until March 29, with the INPI given two months to arrive at its decision.

Vincent Alazard, mayor of Laguiole, told newspaper Nice Matin: “We are writing a new page in the history of this knife. It is incredible.”

Honoré Durand, master knife craftsman and president of the union grouping seven knife manufacturers in the village and its surroundings, told the Agence France-Presse: “Today, consumers want to identify the provenance of products, and we are trying to respond to their needs.”

A second call for the IG label is set to be submitted in April, by knife group l’association CLAA (Couteau Laguiole Aubrac Auvergne), which brings together most of the knife manufacturers in the Thiers region, which is also included in the knife-making history of Laguiole.

Thiers does not want to be excluded from the IG label, and sees itself as part of the “terroir” in which the knives are made, with many workers making Laguiole products in Thiers, rather than the village itself.

Mr Durand said that his union is confident that the IG label will be granted.

He said: “We believe in it, as much as we do the strength of iron. There is a very strong chance of success. It is about industrial property, and it’s very strong.

“If someone copies the IG of the Laguiole Knife, it will be a criminal offence. It's no longer a joke. The French state will defend its label.”

Christian Valat, director of the Laguiole factory in Aubrac, said: “The biggest problem is that there are very significant amounts - we cannot even count them - of knives made in China and Pakistan, which are branded ‘Laguiole’.

“These low-cost copies are inundating the market and are endangering our producers, which are focused on quality.

“We won’t stop counterfeits, but at least we can identify [our own designs with the IG logo engraved on the blade] so that when someone buys a knife, they know it has come from Laguiole.”

The biggest knife producer in the village, la Forge de Laguiole, produces more than 100,000 knives per year, 60% of which are sold abroad, especially in Germany and the US.

One knife-maker Bapsite Boit, told Nice Matin: “Our knives must come from here. That allows us to keep our know-how.”

The term “laguiole” has come to denote a particular shape of a knife, rather than necessarily meaning that the knife was made in Laguiole itself, but manufacturers in the village are now adamant that the knife, when made in the village, should be recognised as its own specific design that cannot be copied.

The wood for the knives originally came from France, while the blade is made of steel. The classic Laguiole design also features the shape of a bee on the back spring.

The origins of this bee are debated, with one story suggesting that it was “granted” by Emperor Napoleon I (as a bee was a symbol he often used) in recognition of the courage of local soldiers.

Yet, the bee only appeared on Laguiole knives after World War Two, more than 100 years after the Emperor died.

The insect design, which sometimes appears to be more of a fly than a bee, may also come from the French word “mouche" (fly), which denotes the end of the backspring, over the rotating part of the blade.

Some older knives do not feature a bee or fly, and have other designs instead. In addition, some knives also include a corkscrew embedded in the handle.

Laguiole is also known for its cheese of the same name, which has Appellation d'Origine Contrôlée status.

It comes a year after the village of Laguiole won a court case against a Val-de-Marne (Île-de-France)-based entrepreneur - Gilbert Szajner - who had registered the trademark name “Laguiole” and was allowing companies to use the name on their knives, even if the products had not been manufactured in the famous French commune.

In March 2019, the Court of Appeal in Paris cancelled permission for around 20 companies to use the name “Laguiole”, meaning that they were no longer allowed to stamp the name on their knife blades, or use it in any marketing or literature.

The court found that there was a risk “that the average consumer would believe that these products were originally from the said commune”, and that the practice amounted to “fraud”.

The judges said that it also amounted to a “strategy to deprive the commune and its administrators of the use of the name Laguiole”.