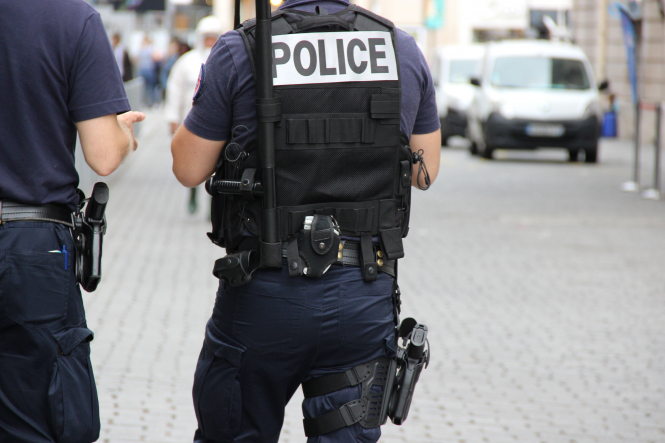 New police uniforms that are more modern are to be introduced in 2022 Pic: Mademoiselle N / Shutterstock

Plans include reducing the administrative work of officers so they can spend more time on the streets, and simplifying procedures for victims of crimes.

The president’s announcement followed months of discussions among unions, MPs and local officials on key priorities for the police, including topics such as police violence, training and use of images.

1. Police officers on streets to double in numbers

The president said he wanted to see “more blue on the streets”, referring to the navy blue uniforms worn by the police and gendarmerie.

To make this happen, existing officers will take on less administrative work, and spend more time on police patrols.

Mr Macron said: “We may need to create some new jobs here and there, but we are able to clear the margins for manoeuvre [using existing officers].

“I want to set a goal to double the presence of police and gendarmerie on the streets within 10 years.”

In 2020, France had 8,126 officers on the street (agents de surveillance de la voie publique) according to government data.

This compares to 9,248 police community support officers (PCSOs) in the UK in the same year. PCSOs are designated police staff who help police with their work in highly-visible roles in public, but do not have the exact same powers as full police officers.

Compared to the rest of Europe, in 2017-2019, figures from Eurostat show that France had relatively few police officers on average per 100,000 people. It had just over 300, compared to the countries with the highest numbers, Cyprus (almost 600) and Greece (around 500).

2. Goal set for one body camera per police officer

An extra 15,000 police body cameras are to be provided for officers, doubling the existing number, with the overall objective of having one camera per officer by 2023.

Plans are also underway to equip all police vehicles with cameras.

The president said the cameras would help to prevent “slip-ups” by people being questioned in any “judicial follow-ups”, and would also help to “prevent violence” among police officers.

The cameras will therefore work to monitor the conduct of both police officers and members of the public, in the event of a later judicial review or court case.

3. Victim complaints to be filed online by 2023

In order to better protect victims of crime, the process of filing a complaint with the police will be simplified including the reporting of crimes online.

The president said he wished for the online system to be operational by 2023, including a mobile app and internal procedures for handling complaints made digitally.

Currently, it is possible to file a preliminary complaint online.

4. Increase in police powers to give fines

The president said he planned to increase the police and gendarmerie’s ability to give flat-rate fines – a form of sanction that can be given with no trial if the officers see certain types of illegal activity taking place.

Mr Macron celebrated the fact that 100,000 flat-rate fines have been given since September 2020 for drug use.

5. Criminal proceedings to be simplified

Criminal proceedings are to be simplified in order to free up police time and energy.

The president has asked Minister of Justice Eric Dupond-Moretti “to take concrete steps to simplify proceedings” within three months.

He said these include “a drastic simplification of the framework for enquiries, the extension of verbal summary statements for small crimes, and the use of new methods for detectives, allowing them to avoid referrals for long interviews, which can be filmed.”

6. Police training to be extended

From 2022, initial training for police officers will be extended by four months with training for judicial police integrated into the programme.

Training for existing officers will be increased by 50%, which the president said would be considered part of normal working hours and “approved by workplace superiors”.

In Paris, a new training centre for police and gendarmerie will be opened to train new CRS (Compagnie Républicaine de Sécurité, or riot police) officers.

7. Reserve police force to be created

Reserve police forces are made up of volunteers, such as retired police officers, who assist the police with general operations and special missions.

Fashion and design schools have been asked to redesign the police uniform to make it more modern, a change that is set to be introduced in early 2022.

The new uniform will be made in France and is likely to include a polo shirt and a cap, instead of the helmet police currently use.

Mr Macron announced increased funding that is “without precedent” of €1.5billion for the Interior Ministry by 2022.

This includes €500million to be allocated to the police and gendarmerie in addition to €900 million already promised by Prime Minister Jean Castex in July.

The president said: “95% of this is destined for materials and investment.”

10. Parliamentary evaluations for police to be introduced

Mr Macon said: “An inspection body for the forces of order will be created to evaluate their actions. When errors happen there should be consequences.”

He added that reports by existing bodies that oversee the police (the IGPN) and the gendarmerie (the IGGN) would be made public from now on.

11. Long-term plan for internal security being drawn up

A new planning law will be introduced for internal security in order to put in place long-term measures for transforming the police and gendarmerie.

Mr Macron said: “The goal is to think of the police and gendarmerie of 2030.”

Interior Minister Gérald Darmanin will prepare the text for the new law to be presented to government ministers in early 2022.

Is a French gendarme same as an agent de police?