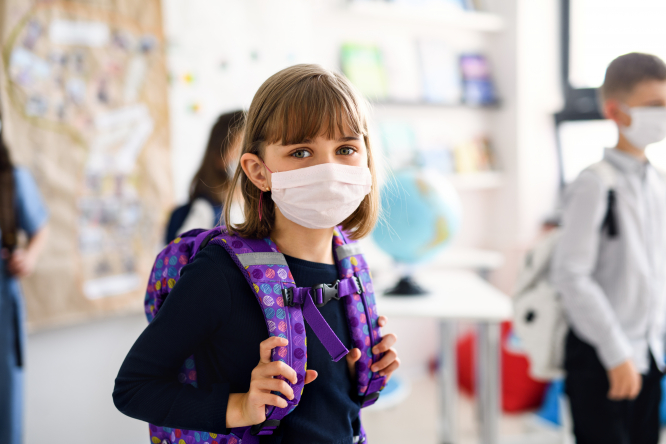 All primary pupils will have to wear a mask in school from Monday Pic: Halfpoint / Shutterstock

Mask-wearing is to become obligatory once again in all French primary schools, as educational establishments across the country move back up to alert level 2.

“In this context of the return of the epidemic, we must redouble our vigilance,” said President Emmanuel Macron during an address to the nation last night (November 9).

“All the [rule] relaxations which were envisaged at one point will therefore be put back in order to retain the restrictions which are currently in place.

“Although I know how difficult this is, mask-wearing in primary schools will therefore be maintained for the moment.”

Until now, schools had only moved to alert level 2 if their department’s infection rate remained above 50 cases per 100,000 people for at least five consecutive days.

On Monday (November 8), masks had become compulsory once again for primary pupils in 40 departments, which joined the 21 which had never dropped the obligation.

The remaining departments have so far maintained an infection rate below 50 cases per 100,000 people, and so are currently on alert level 1 (green), which sees limits on pupil mixing and requirements for disinfecting surfaces relaxed slightly.

The return to level 2 (yellow) means that physical and sporting activities will be required to take place “mainly outdoors” if practical. If this is not possible, sports lessons may be carried out inside, but all contact sports are banned.

Mixing between classes or other relevant groups is not allowed and pupils must socially distance as much as possible. Surfaces must be disinfected throughout the day, and lunch should be served individually to each pupil, rather than buffet-style.

The metropolitan French departments which were moved to alert level 2 on November 8 are:

As Covid-related rules tighten in French schools, Moderna has applied to the EU medicine regulator for approval of its vaccine for use among children aged between six and 11.

At the end of October the company had revealed the results of clinical trials, which had shown that 50 micrograms of the vaccine produced a “robust” immune response among children.

This comes as France’s health service quality regulator Haute Autorité de Santé (HAS), published a report on Monday (November 8), advising against use of the vaccine in people under 30 after a study showed a slightly higher risk of heart problems among this age group.

The risk of heart issues was “particularly marked” among men under 30 years of age.

As a result, the HAS said it “recommends, for the under-30s, when it is available, use of the Pfizer vaccine, whether for the first vaccination or the second”.

HAS’ advice goes against that of the European Medicines Agency, which authorises the use of Moderna for people aged 12 and over.

Moderna has already applied to the American Food and Drug Administration (FDA) for the authorisation of its vaccine for younger children, but the US agency has delayed the publication of its decision until January so as to have more time to evaluate the risk of myocarditis.