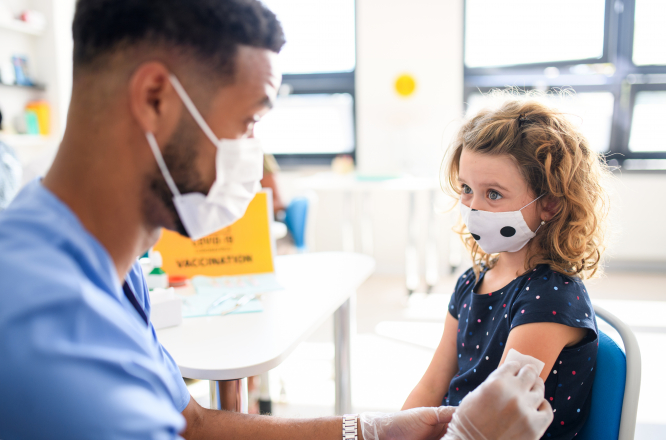 The US has approved the Pfizer and Moderna vaccines for over-5s Pic: Halfpoint / Shutterstock

The US has begun vaccinating five to 11-year-olds against Covid following approval last week by the Food and Drug Administration (FDA) and now by the Centers for Disease Control Prevention (CDC).

Around 28 million children are eligible for the vaccine, which will be administered in two doses, given three weeks apart. However, the dosage contained in each injection will be reduced from 30 to 10 micrograms.

President Joe Biden said that this vaccination “will enable parents to put an end to months of worry for their children, describing it as a “turning point” in the fight against Covid.

What is France’s view on vaccinating younger children?

In France, the Covid vaccine is currently only available for children over 12 years of age and paediatricians’ union Syndicat national des pédiatres français does not currently recommend that younger children receive it.

Union president Dr Brigitte Virey told La Dépêche that: “We need to take a few months and see how the situation evolves. If we notice a significant increase in [cases] among five to 11-year-olds, with hospitalisation, [extending] the vaccination could be warranted.

“For the moment, in our view [rolling it out to younger children] would not be justified. As is always the case with vaccinations, we must maintain the balance between the benefits and the risks.”

Pfizer and Moderna ‘safe’ for children

Pfizer has announced that its vaccine is “safe” for five to 11-year-olds, among which it offers an efficacy rate of 90.7% for a dose of 10 micrograms.

A study involving 4,500 children aged between six months and 11 years in the US, Finland, Poland and Spain found that the side effects observed among this age group were generally comparable to those noted among 16 to 25-year-olds.

Moderna has also confirmed that the immune response triggered in six to 11-year-olds by its vaccine is “robust” following trials carried out on 4,700 children. The most common side effects experienced included headaches and a fever.

“In terms of side effects, there have been no particular problems reported,” Dr Virey said. “The problem is rare undesirable effects, on which we do not have sufficient perspective.”

Among 12 to 17-year-olds, there have been some instances of myocarditis – an inflammation of the heart muscle – but in such cases symptoms remained mild.

“The risk of developing a heart problem is much higher if you catch Covid than if you have the vaccine,” CDC paediatric cardiologist Dr Matthew Oster said as the US announced the extension of its vaccination campaign to younger children.

Experts also believe that the risk of myocarditis may be reduced among five to 11-year-olds because of the reduced dosage of the vaccine.

Little to no immunity

Very few children who contract Covid become seriously ill but Dr Virey observed that: “For 18 months they have been hidden behind masks, so their immune systems have not been primed.

“This is why we have seen winter infections – whether bronchiolitis or gastroenteritis – appear very early [this year].

“So we must ask ourselves: will the immune system of five to 11-year-olds allow them to fight off [Covid] effectively? That, we do not know.”

On October 26, 35 children under nine were being treated in French hospitals for Covid, according to La Dépêche.

When deciding whether younger children should receive the Covid vaccine, the government will follow advice issued by the health service quality regulator, the Haute Autorité de Santé, which is expected before the end of the year.

Covid cases on the rise in France

Before the Toussaint school holidays, primary school pupils in 79 departments had been allowed to stop wearing a mask at school as their infection rates dropped below the first alert threshold of 50 cases per 100,000 people.

However, in several departments case numbers have now tipped back over this threshold, obliging primary schools to bring back their mask-wearing requirements.

Read more: More French primary schools to end mask rule (but it is back for some)

They will join the 22 departments where masks were already required in primary school settings.

The full list of the 61 departments now over the 50 cases per 100,000 people seuil d'alerte limit will be published in the government's official legal publication Le Journal officiel tomorrow.

2 days ago
2
Why are Covid cases in France still higher than in most of Europe?