President Macron speaks out against US Capitol invasion 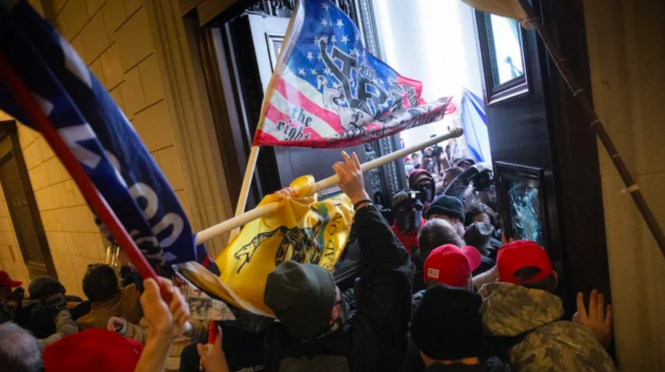 President Macron has given a speech condemning Trump supporters who stormed the US Capitol building in Washington DC last night (January 6).

The French president, speaking from the Elysée palace, said: “What happened today in Washington is not American.”

“When in one of the world’s oldest democracies, supporters of an outgoing president take up arms to challenge the legitimate results of an election, the universal idea – one person, one vote – is undermined.”

Extraordinary scenes in US capital

Protests began outside the Capitol building – the centre of US governance – following a rally held by Donald Trump during which he called on his supporters to undo his defeat in the November Presidential election.

Extraordinary scenes followed as rioters clashed with police outside the Capitol, and eventually made it into the building where Congress was meeting to verify President Biden’s election victory (which has since been confirmed).

Senators were evacuated moments before rioters entered the senate chamber, and asked to put on gas masks to protect them against tear gas being used by police to quell the protest.

Four people died during the event. One woman was shot by police and three others suffered medical emergencies.

While President Macron called the rioters “violent individuals”, Donald Trump called them “very special people” during a video in which he also advised them to “go home”. Other leading politicians, including President Joe Biden, have labelled the event an “insurrection”, meaning a violent uprising against the government.

But Lauric Henneton, specialist in the US and lecturer at the Versailles Saint-Quentin-en-Yvelines University, told news source FranceInfo that the event did not pose a real threat to the US government.

He said: “These protesters knew that they were not going to take power… It was a spectacle [but] they are not revolutionaries. When you see them arriving in the lower chamber, they are taking photos.”

For Mr Henneton, the most troubling aspect was how the rioters gained access to the US Capitol in the first place. He said: “We can ask questions over how easily these people entered into the Capitol building. It amounts to a security problem – proof of staggering security incompetence – rather than a problem for democracy.”

He added: “When we see the extent to which forces of order were used to protect the Capitol during Black Lives Matter protests, it’s shocking to see how [these protesters were able to] slip through the cracks."

Why Biden is good news for France

What are the issues for US citizens living in France?