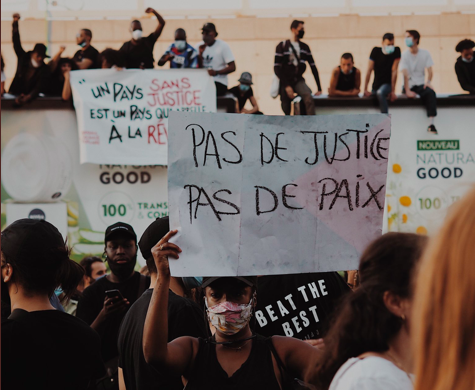 A protestor in Paris on June 2, 2020, holding a sign that reads "no justice, no peace." @incvbmus/Twitter
By Joanna York

Christophe Castaner promised the French Senate that action would be taken against racism in the French police force. He declared: “Each transgression, each excess, each word, including racist expressions” would be “the object of an inquiry, a decision, a sanction".

This announcement comes one day after protests against police violence in France saw 20,000 take to the streets in Paris, with smaller protests in cities around the country.

The protests went ahead despite police banning them on health grounds hours before they were due to start. Gathering in groups of more than 10 is still not allowed in public places, under health and safety rules put in place to contain the Covid-19 pandemic.

French protests ran in parallel to Black Lives Matter protests in the US, which were sparked by the death of George Floyd.

Mr Floyd died while being arrested in the US city of Minneapolis. One of the police officers who arrested him has since been charged with second-degree murder for his role in asphyxiating Mr Floyd by pressing his knee into his neck for nearly nine minutes.

In France, protesters called for justice for Adama Traoré, who died in police custody in 2016. When Mr Traoré was arrested by three police officers, he was placed in a similar hold to that applied to Mr Floyd, with his chest to the ground, and restrained by police body weight on top of him. Mr Traoré later died in police custody.

Calls for calm, and faith in justice

Government spokeswoman Sibeth Ndiaye also called for “calm” following the protests, and opposed the idea that racism in the U.S. and France were comparable “in terms of history or in terms of society.

“I call for these subjects to be approached with an enormous amount of prudence,” she said.

In reference to the death of Mr Traoré in 2016, she acknowledged the event provoked “legitimate emotion, which is still very present in our country,” but reiterated her faith in the French justice system. She stated: “We trust justice to bring light to this, and if necessary the issue will go to trial.”