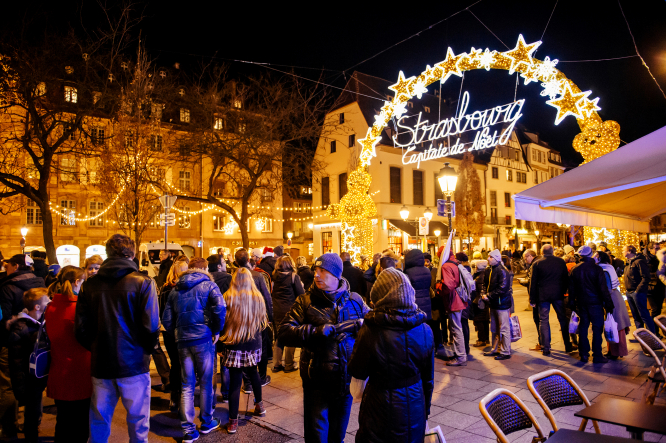 The famous Strasbourg Christmas market opened on November 26 this year with a range of Covid rules in place, after being cancelled last year due to the pandemic (Stock picture used) Pic: Hadrian / Shutterstock

Authorities in Strasbourg have denounced the large crowds seen at the city’s famous Christmas market, and warned that health rules and physical distancing are not being respected.

Bas-Rhin prefect Josiane Chevalier said: “I saw myself that certain rules we had put in place in the context of the health protocol had not been respected.”

The prefect had previously inspected and approved a health and safety plan ahead of the market’s opening on November 26. The market is so far scheduled to stay open until December 26.

Ms Chevalier said that many visitors had not respected the rule to wear a mask, or to only consume food and drink in the dedicated restaurant areas, which were intended to only be accessible with a valid health pass.

She called on the city’s mairie to make a “bigger effort in communication” for the annual event, and said that she was considering the “possibility of closing certain chalets” in order to reduce numbers.

Ms Chevalier even warned that if more rules were not respected, she could end up closing the event entirely.

The market was cancelled last year due to the pandemic, and many similar Christmas markets in neighbouring Germany have been cancelled this year too.

The fifth wave of Covid is increasing in strength in the Grand Est region, where the level of incidence (cases per 100,000 people) is now 243.

The first level of national alert is 50, and the highest alert is 200 or more.

Ms Chevalier said she would be writing to the city’s mayor, and called on the “organisers” of the event to make a “considerable information effort about wearing masks” as well as banning the consumption of food and drink outside of the designated areas.

She said: “There is a big, big information effort to do. We cannot have a Christmas market, which has clearly defined rules, with an organiser that is not doing everything it can to apply the rules. For example, we should add extra restaurant spaces and signpost them better.”

She also called on exhibitors to do more to help, in contrast to some who she said were letting people eat and drink at their stands.

It comes as France has introduced new measures to fight the fifth wave of Covid, including wearing masks, requiring non-vaccinated people to take a test within the past 24 hours if they want their health pass to remain valid, and investigating eight suspected mainland cases of the new variant Omicron.

Updated: Where in France do I have to wear a mask when I