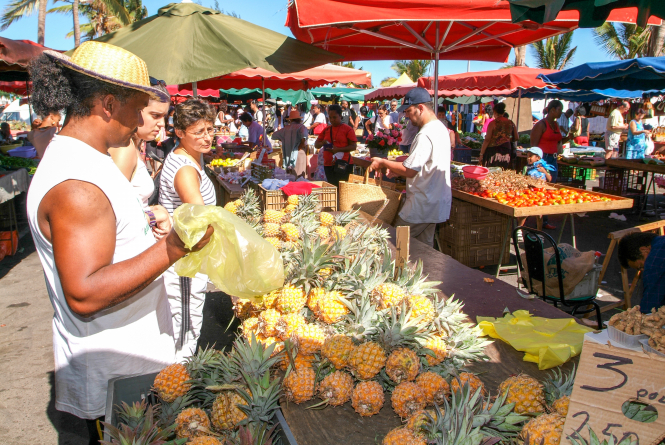 The infected man had travelled via South Africa on his return to La Réunion, an island in the Indian Ocean that is an overseas department of France (Pictured: Saint Paul market) Pic: Stefano Ember / Shutterstock

The Omicron variant of Covid-19 has been detected in France for the first time - in the overseas department of Réunion. It comes as the government introduces new measures to fight the spread of the strain.

The island in the Indian Ocean lies between Madagascar and Mauritius and is part of the African continent and a department of France.

The first case of Omicron was identified in a 53-year-old man who had travelled to Mozambique, connecting via South Africa – the country in which the strain was first detected – before returning to Réunion.

The case was announced by official researcher Dr Patrick Mavingui, at the Processus centre for infections in isolated tropical areas (Pimit).

The man is now self-isolating along with six people in his immediate circle: three family members and three professional contacts. He is said to be suffering muscle pain and fatigue.

Five tests of close contacts to the man were immediately taken and sequenced to check if they had also contracted the Omicron variant, but they came back negative.

So far, flights between France and Réunion are still operating, but travel is severely restricted and only travellers who can prove they are entering for essential reasons are allowed.

Travellers need to take a test 72 hours before travelling, quarantine for seven days upon arrival, take a PCR test after a week, and fill in a travel certificate form upon landing.

It comes as Health Minister Olivier Véran said that he was “keeping particular attention on the overseas territories of La Réunion and Mayotte, which have direct or indirect links to the seven countries” in Africa with which air travel has been suspended.

On Sunday (November 28), the minister said that there were eight “possible” cases of the strain detected in France, with sequencing set to be completed shortly.

Government spokesperson Gabriel Attal said that the country was on “absolute alert” and was waiting for the results of tests of other people “within the next few hours”.

It comes a week after the World Health Organisation (WHO) said that Omicron presented a “very high risk” worldwide, and that “given the mutations that could cause a potential vaccine escape of the immune response, and also advantages of infection, the probability that Omicron will spread worldwide is high”.

The health ministers of France, US, Canada, Germany, Italy, Japan, and the UK met to “discuss the changing Omicron situation”, and “recognise the exemplary work of South Africa in detecting the variant and alerting others”.

The group also “recognised the strategic importance of ensuring access to vaccines”, and giving “operational assistance” in terms of “offering vaccines, fighting against disinformation, and supporting research and development”.

The countries added that they were working closely with the WHO and its international partners to “share information and keep watch on Omicron”. The ministers are set to meet again for an update in December.

Omicron has now been confirmed in several countries, including in Europe: the Netherlands, Germany, Italy, and the UK.

Many European countries, including France, have closed their borders to African countries in which the virus is spreading more rapidly, including South Africa, Botswana, Zimbabwe, Namibia, Lesotho, Eswatini (Swaziland), Mozambique, Zambia, Malawi and Angola.

France has also introduced a range of new measures for schools and workplaces, and now requires tests from the past 24 hours only in order for non-vaccinated people to use a health pass.

Everyone aged 18 and over is now invited to book their booster jab within seven months of their second injection, or face the expiration of their health pass.