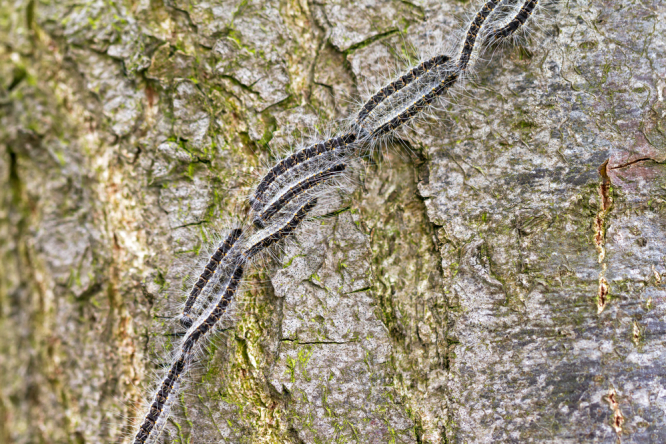 Processionary caterpillars are proliferating across France, from the south, to Brittany in the west, and across to the east of the country – and they have different seasons when they are potentially dangerous.

"There are two different species: the oak processionary and the pine processionary," Jérôme Rousselet, a researcher in the forest zoology unit at the Institut national de la recherche pour l'agriculture, l'alimentation et l'environnement (INRAE), told FranceInfo. Both are moth larvae.

The pine processionary caterpillar leaves its nest at the top of the tree to burrow into the ground, where it transforms into a chrysalis. The oak processionary remains in the tree for the chrysalis phase.

Both species march in lines, hence the name, and have stinging hairs that can cause skin irritations, and can be dangerous to dogs and children.

Touching or even just getting close to the caterpillars can be dangerous; their hairs can cause severe skin and throat reactions, blisters, conjunctivitis, and asthma attacks even among adults.

Other than in Grand Est, oak processionary caterpillars had been relatively rare in France – but have been spreading west over the past decade, and have now been spotted in Normandy and Brittany.

Originally from the Mediterranean basin, its maximum area of extension was in the Loire Valley until the end of the 1980s. From the 1990s, "it began a breakthrough towards the north, which has not stopped," Mr Rousselet said.

Climate change and human action has prompted the spread of pine processionaries across the country.

"To feed, pine processionaries need specific conditions: 0°C at night and at least 9°C during the day in winter. If these conditions are not met, the larvae do not survive. We have observed a warming of the air that has allowed them to survive and therefore to proliferate," Mr Rousselet said.

Humans have also played a role, by planting many ornamental trees, including pine trees, which these insects love.

"For 30 or 40 years, the most planted pine was a favourite: the black pine," Mr Rousselet said.

12 hours ago
4
How will foreign visitors to France use the health pass for going out?