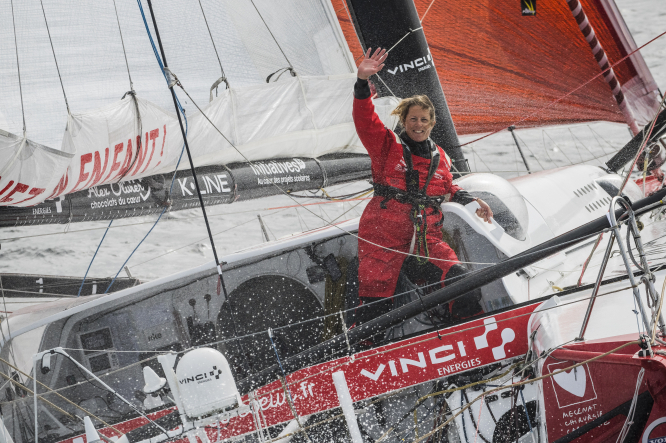 Vendée Globe competitor Sam Davies’ boat has taken considerable damage after striking an unknown object, slightly injuring Ms Davies and forcing her to put her race on hold while she assesses the damage.

The crash occurred on Wednesday night (December 2). Another racer, Sébastien Simon, also hit an unknown object. Both sailors have now taken shelter off the coast of the Cape of Good Hope in South Africa, and do not know yet if they will be able to repair their boats and set sail again.

The Vendée Globe is a solo, non-stop, round-the-world race that takes place every four years. The competitors are not allowed to get off their boats to go on land, or receive direct help from anyone else to fix their boats, if they want to continue racing.

Read more about the Vendée Globe, which starts and finishes in France

Ms Davies reported that she had suffered injuries to her ribs.

“I was doing between 15 and 22 knots on a complicated sea. I was struck as if I had hit a rock. I was stopped dead in my tracks. There were creaking noises,” she wrote in a blog update.

“I flew, everything in the boat flew, including my dinner. It was violent, I hurt myself.”

She said the crash happened in the night, similar to when her boat was damaged in the 2012/2013 Vendée Globe and she was forced to withdraw.

“It’s always at this time there is trouble,” she wrote.

It is not uncommon for competitors to hit unidentified objects, which could be anything from tree trunks to containers to sea animals.

Ms Davies spoke to The Connexion before setting sail on November 8. She said she did not expect to win the race as her boat is too old, despite her team putting a lot of work into developing it.

“It would be hard to say I want to win this race because, in theory, I could sail a really good race and just finish inside the top 10. For me, I want to be able to do my boat justice and sail as fast as I know it can go,” she said.

Ms Davies was in 13th place in the race, out of 33 competitors, when the crash happened.

Her French partner, Romain Attanasio, is also taking part and is currently in 12th position.

Ms Davies' and Mr Simon's crashes happened days after another competitor, Kevin Escoffier, had his boat split in two by strong waves and he was forced to escape on a raft. He was rescued by fellow round-the-world competitor, Jean Le Cam.

Ms Davies is racing in her third Vendée Globe. She came closest to winning in 2008, when she finished fourth.

She is racing for the Initiatives-Coeur team, which combines sport with humanitarian work in the form of supporting the non-governmental organisation Mécénat Chirurgie Cardiaque.