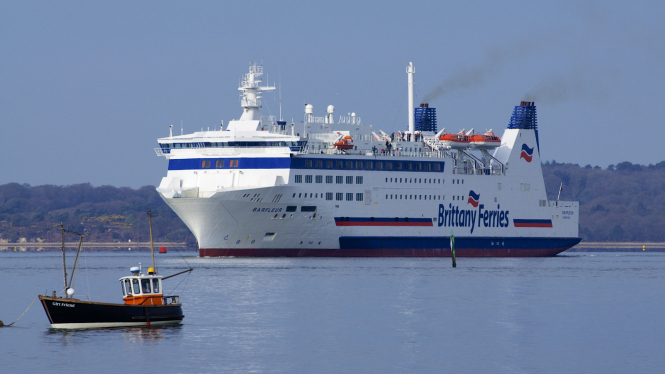 The firm has reviewed the situation in light of the 14-day quarantine that the UK government imposed, as of Monday, on most people entering the country.

“We decided we have to wait on the decisions of the UK and French governments,” said a Brittany Ferries spokesman.

“When a decision is taken by the governments that normal passenger traffic can resume, we will be able to restart our lines quickly.”

Brittany Ferries: No crossings until June 29

The firm's CEO, Christophe Mathieu, has said in a statement today that sailings up to June 28 will be cancelled (you can read it here), which would correspond to the date when the UK is set to review its quarantine rules and by when it is also hoped that France's rules on entry of tourists will have eased up.

This morning the firm's website was allowing people to make bookings starting from June 15, however it is now only allowing them from June 29 in line with the new announcement. A warning is still on the site, that June bookings cannot be guaranteed.

The firm's communications head told Connexion they are constantly reviewing the position in the light of new developments and it is "frustrating" to have to cancel again.

He said it is not definite that the crossings will restart from June 29, but messages coming from several governments point to cross-border travel resuming by the end of June, so they are hopeful it will be possible. They will not cancel any more trips until it is clear that a return to service will not be possible.

"This is the consequence of flip-flop messaging by UK government on quarantine and exemptions (including the potential for travel corridors) and the continuation of FCO advice, advising against all but essential travel," he added.

Brittany Ferries' passenger ferries are currently docked in Caen and Le Havre and the company has kept its crews on under the government’s chômage partiel scheme.

It says it is offering passengers who had booked for ferries which were cancelled a choice between rebooking, vouchers valid for two years or cash repayments. The latter option does not appear to be highlighted in its online Coronavirus information section on writing, however the firm's communication's head said the site does refer to it.

P&O ferries, now owned by a Dubai company DP World, said in mid-May that it will make 1,100 people employed on the ferries redundant because of the drop in demand for travel. It will continue to pay out a £240 million dividend to shareholders.

It has been running a reduced Dover-Calais service, but with no foot passenger tickets.

P&O told Connexion it did not wish to comment on its plans.

DFDS says it is running normal schedules for both freight and passengers, Dover-Calais, Dover-Dunkirk and Newhaven-Dieppe.

The obligatory UK quarantine started on Monday and will be reviewed after three weeks. It requires all people arriving in the UK to fill in an online form before coming, giving an address where they will spend the quarantine.

During the next 14 days, travellers must stay at the given address in “self-isolation” but are allowed out to shop for food and medicines if no-one else is available to do this for them.

In the UK there are now fines in place to enforce the rules, starting at £100 for not filling out the form and up to £1,000 if anyone breaks the quarantine, with the government saying there will be random spot checks to make sure travellers are at the address on the form.

France has retaliated, saying travellers coming from the UK are “invited” to take part in a voluntary 14-day quarantine however there will be no controls to ensure this is done.

However, at the moment, entry into France is still restricted to a limited number of people, including diplomats, health workers, cross-border workers, and those with urgent family business, who have to fill in an attestation giving the reason for their entry into France.

The French government has said it is looking at June 15 to lift these requirements but has not ruled on this definitively.

The UK government still has official advice on the Foreign Office website that no international travel should be undertaken except for “essential” reasons.