Why Brazilians are saying 'sorry' to Mrs Macron 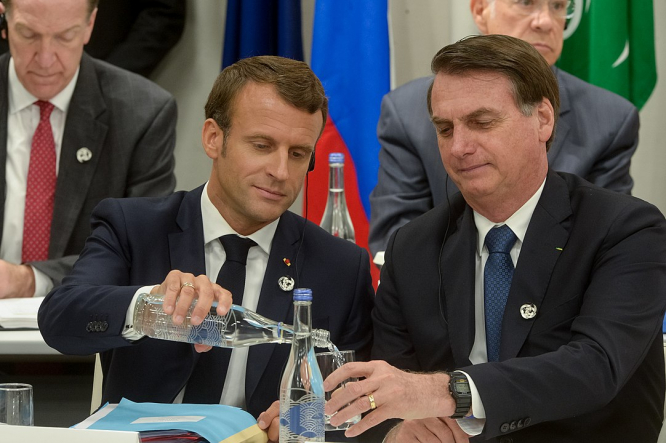 Emmanuel Macron and Jair Bolsonaro before the recent flair-up, at a meeting in Osaka, Japan
By Connexion journalist

Brazilians flooded social media with apologies to Brigitte Macron following derogatory remarks the country's President made about her.

Jair Bolsonaro appeared to unfavourably compare the age and appearance of Mrs Macron, 66, and his third wife, Michelle Bolsonaro, 37, in a comment to a Facebook post on Sunday.

Mr Macron called the Brazilian President's comments "extraordinarily rude". He also suggested that Brazilian women should be ashamed of the behaviour of their head of state.

Mr Bolsonaro has since deleted his comments - but not before he was widely condemned on social media.

Hashtags including #DesculpaBrigitte and #PardonBrigitte (sorry, Brigitte) trended across the world as social media users posted messages of support to Mrs Macron.

Brazilian author Paulo Coelho, best known for his novel The Alchemist, also posted a video on Twitter “to the French people” in which he apologised, in French, for the "hysteria of Bolsonaro towards France, the French president and the French first lady.”

French media, quoting officials close to Mrs Macron, have said she was "touched" by the messages.

It is the latest in a series of tensions between the two world leaders, following Mr Macron’s call on the G7 summit to place the Amazon wildfires as the "first-order" of their agenda.

Mr Bolsonaro had shown signs of appeasement on Tuesday by withdrawing the message and letting it be known - after a global outcry - that Brazil was "open" to the $20 million in financial assistance from the G7 to fight fires in the Amazon, which he had initially refused.
However, he came back on Wednesday, demanding that Emmanuel Macron "retract" after accusing him of lying and "relativising" Brazil's sovereignty over the Amazon, a particularly sensitive issue in Brazil.