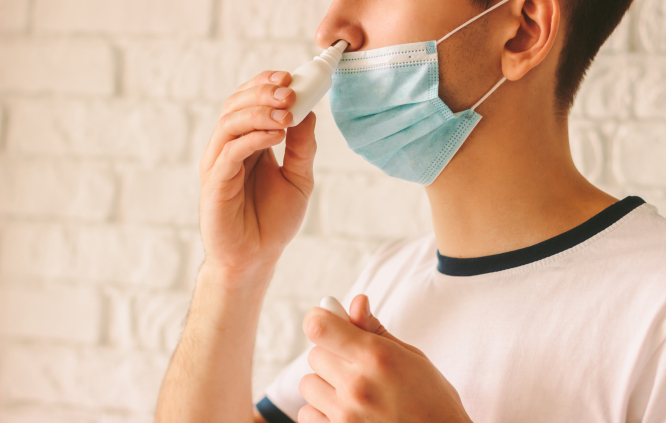 The nasal spray works on the mucous membranes, preventing Covid from entering the body in the first place Pic: Anna Tryhub / Shutterstock

A nasal spray that could protect against Covid and which is being developed by researchers in France has seen encouraging results in the first trials.

Researchers from the Université de Tours and public research institute Inrae (Institut national de recherche pour l'agriculture, l'alimentation et l'environnement)), who are working together on the project, filed a patent this week for the spray to be considered a Covid ‘vaccination’.

It comes after promising results from animal tests.

How does the nasal spray work?

The ‘mucosal immunity’ nasal spray is based showed "very positive" results on mice and golden hamsters, the study said. However, these results have not yet been published in a scientific journal.

The researchers say that the advantage of this spray is that it could cut the spread of the virus between individuals, by working on the nasal mucus membrane directly.

In a statement, Inrae said: "Technically, the vaccine will be administered using a small adapter placed at the end of a needleless syringe, allowing diffusion within the nasal cavity.

“Unlike intramuscular vaccines, only nasal vaccines are capable of preventing the virus in the nose, the initial stage of infection. They induce immunity in the nasal mucous membranes, which is the entry point and the place where the virus multiplies.”

Dr Mielcarek, who is working on a nasal vaccine against whooping cough with the Institut Pasteur de Lille, said: “It is a particular type of immunity that is conferred on the mucous membranes, notably by IgA (immunoglobulin A) antibodies.

“This is very pertinent in cases of viral infection like Covid because this immunity prevents the virus from entering the cells."

Dr Mielcarek called this a ‘local immunisation’ that creates a ‘local response’. She said: “They potentially have a barrier effect, stopping the virus from entering.

“Current vaccines (Pfizer, Moderna, AstraZeneca) are administered intramuscularly [into the arm]. They reduce the viral load and protect against the disease, but they do not prevent transmission. In other words, they are not completely effective.”

Dr Mielcarek said that in the future, healthcare is likely to move “more and more towards this type of vaccine”.

She said: “This type of nasal vaccine already exists against influenza in the United States and Great Britain. It is a paediatric vaccine based on an inactivated virus, administered to patients between 24 months and 18 years of age, and it works well.”

Isabelle Dimier-Poisson, manager of research team BioMAP, told La Dépêche: “Experiments have shown that the spray stops transmission early on. I work on infected animals: two days later, I see that the viral load in the lungs is explosive.

“If I look at the same thing on animals that have been vaccinated and infected, I find no trace of the virus in the lungs.”

The spray could later be used as a booster for people who have received a full vaccination already.

Read more: Over quarter of a million have received Covid booster jab in France

The research team is set to start production in the autumn, with a view to beginning a clinical trial during the second quarter of 2022, and reaching the market in 2023.

This is unlikely to happen soon as the research is still at the trial stage.

The World Health Organisation is currently aware of “eight nasal spray vaccines in clinical trial stage”, said Dr Mielcarek, and it is difficult to know when or if they will come to market.

If they do, however, they could complement the current vaccines well.

The nasal spray could also be used in less developed countries because it is, Dr Mielcarek said, “easy to administer, there is no needle, and it’s fairly temperature-stable”.

It comes after the latest modelling study from Institut Pasteur found that vaccination rates must continue to rise in order to prevent a fifth wave of the virus in future months.