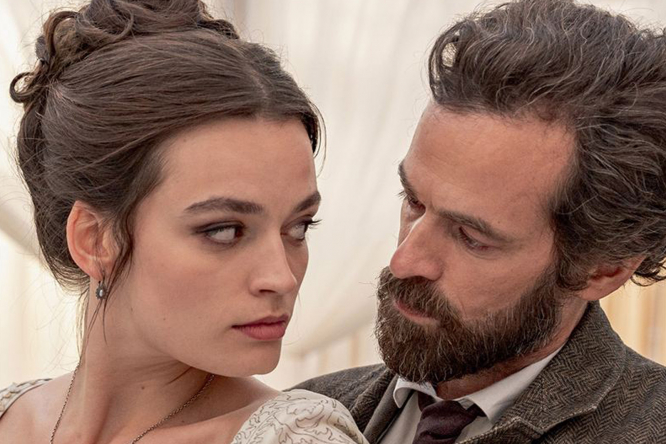 The film was previewed for launch on August 25 but has been deferred to October 13, say distributors Pathé

Romantic drama Eiffel, starring Emma Mackey and Romain Duris, says love was the inspiration, but a biographer of the engineer says the A-shaped tower built for the 1889 Paris Universal Exhibition was not even Eiffel’s own idea.

She grew up in Sablé-sur-Sarthe, in Pays-de-la-Loire, with her French father and English mother before leaving France for Leeds University.

There, she studied English and found a passion for theatre. She landed her debut role as Maeve Wiley in the Netflix series Sex Education shortly after moving to London in 2019.

In Eiffel, she plays Adrienne, a former girlfriend of Gustave (Duris) who it says inspired the design.

The film received glowing reviews after its spring premiere at the Alliance Française French Film Festival in Australia, but Eiffel’s biographer, Christine Kerdellant, says the script plays with the true story, which is in her book La Vraie Vie de Gustave Eiffel (The Real Life of Gustave Eiffel), published by Robert Laffont in the spring.

Ms Kerdellant said: “It was in response to the film that I titled my book The Real Life... If it hadn’t been for Covid, the book and film would have come out at exactly the same time. One was a response to the other.”

The €23million film had only three weeks of shooting left last year when France went into the first national lockdown on March 17. That forced Pathé to delay the release until now.

In Eiffel, the plot moves between the time of construction and 20 years earlier, when Gustave fell head over heels for young Adrienne in Bordeaux. She is 18 to his 29, and her parents forbid them to marry.

Fast forward two decades and the pair meet again, with Adrienne his muse for his ambitious tower plans.

Ms Kerdellant said: “It was Eiffel’s assistants, Emile Nouguier and Maurice Koechlin, whom he had asked to think about a project for the Universal Exhibition, who had the idea to make the tower of 300 metres, the highest in the world, with the usual technologies developed by Eiffel.

“Eiffel didn’t like the project. He asked them to discuss it with the architect of Etablissements Eiffel, Stephen Sauvestre. It was he who had the idea of the rounded shape, the decorations, the two floors, the bell tower, etc.

“But it was Eiffel who fought for its existence, who found technical solutions to build it, who financed it beyond the subsidy (which was 1.5million francs of the 8million franc cost), who had the idea to make it a spotlight for scientists and who never gave up when Paris city hall wanted to demolish it.”

Ms Kerdellant said although it was not his idea, “it is indeed his tower”.

She is “delighted” the film exists. “Director Martin Bourboulon and I have the same objective: to restore Eiffel. And it is really important. The film will be good because Martin Bourboulon is a very good director.

“That said, the scenario is not based on fact, it is false. If Adrienne was the age he gives her, she would have been eight when engaged to Eiffel! And he didn’t build the tower for her at all.”

However, she admits the A-shaped landmark would possibly have made Eiffel think of Adrienne, and another previous girlfriend called Alice, whom he loved when he was a child.

“One can imagine that Eiffel later thought of Adrienne (and Alice, the girl he loved at age nine) when he saw that the Tower looked like an A…

“And even if it’s not true, the movie still gives a good image of Eiffel and shows the feat of building the tower, so long live poetic licence.”

France now has oldest working cinema in world, dating to 1899