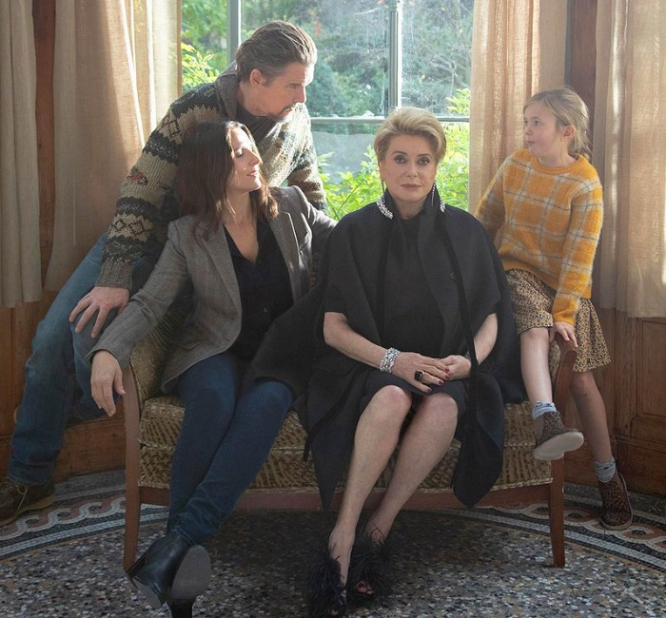 Still from The Truth with Juliette Binoche, Ethan Hawke, and Catherine Deneuve
By Connexion journalist

Sometimes an acting giant bestrides the entire duration of a film so as to render all other performances ‘bit-parts’, no matter the calibre of the ensemble cast.

In this case it is the veritable grande dame of French cinema, Catherine Deneuve, who devours scenes, rendering even Juliette Binoche – herself no stranger to captivating audiences – a mere foil.

Perhaps Deneuve’s dominance is not surprising given that for this, his first feature film set outside Japan, arthouse director Hirokazu Kore-eda casts her in the role of a film star diva, Fabienne Dangeville, legendary and much-loved.

Yet as she publishes her memoir and embarks upon promotional activity in support of it, it is clear that she is particularly self-important and manipulative.

Her daughter Lumir (Binoche) and Lumir’s husband Hank (Hawke) are guests at her lavish home, the place where Lumir grew up.  The memories evoked in Fabienne’s book, however, are far from the ones Lumir retains from childhood.

Deneuve as the unreliable narrator is absolutely magnetic. “I’m an actress,” she states frankly. “I won’t tell the naked truth, because it’s not interesting.”

Fantasy Omar Sy vehicle from about what happens when the stories a father tells his daughter before bed come to life.