Weaving is coming: GoT tapestry heads to France 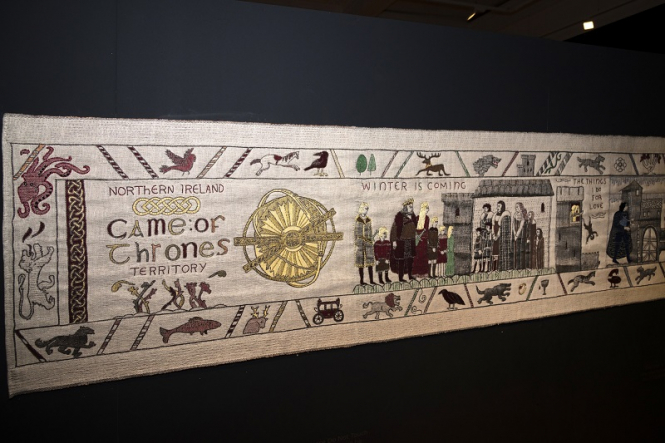 The tapestry goes on show in Bayeux on September 13. Above, the start of the tapestry showing the show’s first scene
By Emily Jones

The work was created by 30 embroiderers from Northern Ireland and is 90 metres long – 20 metres longer than the original.

Game of Thrones has become an integral part of Northern Ireland’s heritage, with 80% of the show filmed there.

Since 2013, Tourism Ireland has worked on what it calls its ‘legacy programme’, which is dedicated to “leveraging the craftsmanship of Northern Ireland” while accommodating what its head of communications Brian Twomey terms “set-jetters”: tourists who travel the world to see “tangible aspects of the show”.

The programme includes the ‘Doors of Thrones’, carved with scenes from the show.

The doors were made with wood from two trees from Dark Hedges, near Armoy, Co Antrim – used in scenes along the Kingsroad – which were blown over in Storm Gertrude.

The doors can be found in pubs and restaurants across Northern Ireland.

The tapestry pays tribute to the country’s rich history of textile manufacturing.

It was made using linen from one of the last surviving mills there.

Before being woven, each scene and character from series one to seven of the show was hand-drawn by illustrators.

The images were digitally redrawn by graphic designers to map out the weaving guide and colour palettes for each section.

These were hand-woven on a state-of-the-art loom, with embroiderers retouching fine details by hand.

The tapestry has been on display at the Ulster Museum in Belfast since July 2017.

It remained unfinished until the show’s eighth and final series, which aired in April, after which artists raced to add the final scenes.

It will be displayed from September 13 to December 31 in Bayeux.

Due to its size, it will be located in the Hôtel du Doyen, rather than alongside the original in the Bayeux Museum.

Fanny Garbe, communications manager at Bayeux Museum, said: “We thought it was a really nice idea, as well as in everyone’s interests concerning the promotion of tourism, whether it be for Bayeux or Northern Ireland, as we know there will be lots of visitors.”

Mr Twomey added: “It’s lovely that the tapestry is en route to the place that inspired it.”

The exhibition will open every Wednesday to Sunday from 11.00 to 18.00 and entry will be free.

The 11th-century Bayeux Tapestry is well-known for depicting the story of William the Conqueror. Here are some facts you may not know about it...

1. Despite its name, it is not actually a tapestry. It is an embroidery on linen cloth with woollen threads stitched on to a piece of already-woven fabric. A tapestry is made by the design being woven into the fabric as the material is simultaneously being created on the loom.

2. It was probably not made in France. The consensus among academics is that it was most likely crafted in England, probably near Canterbury in Kent.  Its artistic style is a type known to have developed there during the 11th century.

3. The tapestry features the first known visual depiction of Halley’s Comet. The first written description was in a Chinese chronicle in 240 BC.

4. The final pieces are missing. The tapestry remained in Bayeux Cathedral from at least 1476 onwards and traditionally was only brought out for display once a year and then stored away.

However, by the time its existence became widely known to scholars in the early 18th century, the final pieces of the story of William the Conqueror were missing. Because it was repeatedly displayed and then put away, academics believe the edges of the tapestry became damaged and eventually destroyed over time.

5. The Nazis studied it to ascertain the Normans’ Aryan credentials and believed it was important proof for their theories of racial superiority. In 1944, when the liberation of France looked likely, Heinrich Himmler arranged for it to be transported to Berlin. It made it as far as Paris but then liberation meant it was saved.