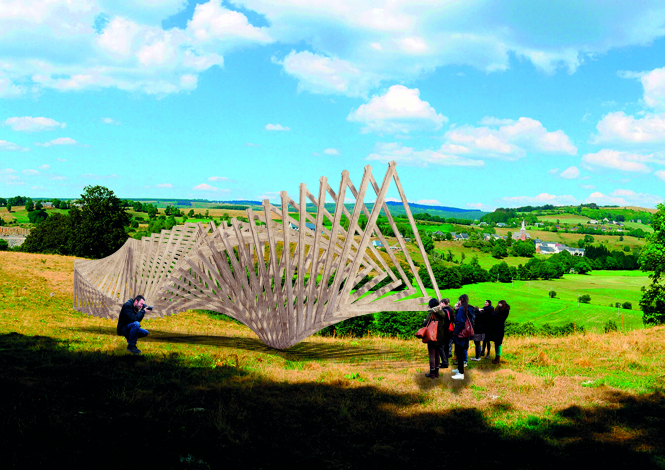 Auvergne is ideal canvas for natural art. Meet the British artist exhibiting at a major art festival there in July.
By Samantha David

The Horizons Arts-Nature festival in Sancy, Auvergne, from July 11 to November 1 features art installations by British artist Kate Studley, who trained at Loughborough University and now lives in Germany. Her art is designed to be ephemeral, and to have the least possible ecological impact.

“I grew up on a farm in Cheshire so have always felt close to nature, it has always been important to me. When I was doing my fine arts degree, I realised that painting in particular produces a lot of rubbish. Just manufacturing paint in the first place produces pollution. So I was keen to develop a way of making art without damaging the environment.”

Read more: when is the best time to visit France's lavender fields?

The Land Art movement which emerged in the 1960s and 70s resulting in artists considering nature in a new way, and the work of Andy Goldsworthy was actually designed to be ephemeral rather than a permanent fixture. “When I moved to Aachen a year ago I was using a lot of wax but that is derived from crude oil, so now I’m using fabrics, biodegradable threads, and planting in my work.”

The Horizons Arts-Nature festival features work from ten different international artists, whose giant artworks will be installed at various locations around Sancy. Kate’s contribution will be a series of large shapes covered in pleated Hessian and attached to a series of trees. The Hessian is planted with grasses and mushroom spores, and as time goes on nature will also invade the fabric, and other plants will grow making living sculptures reaching up into the trees.

“I’ll make part of it in Germany and then install it when I arrive. Until then, I won’t know exactly what it will look like as installation is a creative stage, rather than a purely technical one. The installation date will be determined according to the coronavirus crisis, and also by the weather. My pieces change so rapidly, it could look completely different in a month, so I want to do the installation just a week before the festival opens.”

She says the sculptures challenge the idea that fungi and mushrooms are not beautiful compared to flowers and butterflies for example. “Because they are connected to rotting things and to death, they are often thought of as being less beautiful but I want people to consider them in a different way. I also want people to not see art as a permanent thing, or even a fixed thing.”

At the end of an exhibition or show she prefers to leave her work in place so that it gradually becomes taken over by nature and returns to the land, but this is not always possible. “If pieces are installed indoors or in a space which is then needed for another exhibition, then I have to remove my work at the end. At Sancy, however, I’m hoping to make a documentary film about designing these sculptures, making them, installing them and then how they evolve over time.”

How anyone can make environmental art in their garden

She says it’s easy to start making environmental art in your own garden. “Start by finding fabric in the house that you no longer want. Then tear and tie it or sew it to make shapes or sculptures using mud or sticks. Try tying rags on branches, or fences, or old gardening equipment. The idea is just to be creative; make a pile of dried pine cones, make a moss garden in a shady corner and see what grows, make totem poles, and scarecrows. You can also make natural dyes from plants, cut potatoes to make mud prints, or lay paper over tree trunks or leaves and do rubbings with a wax crayon. Or press flowers... once you start, you’ll always find something to do.”