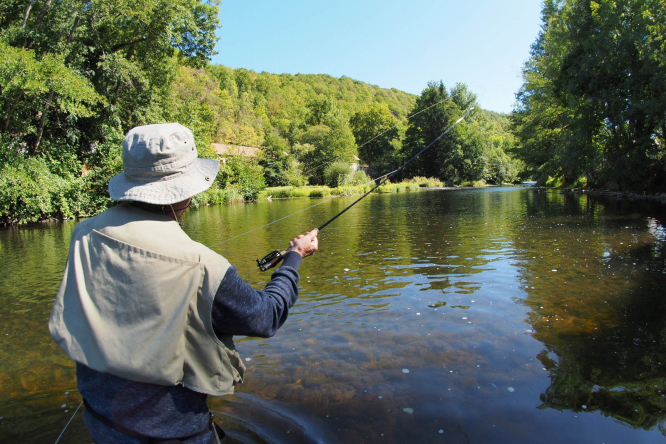 From spots to cast off to interesting fishing museums, our guide pinpoints where to go and what to see for the budding 'pêcheur' in France Pic: Val de Sioule Tourisme

Fishing is an incredibly popular pastime in France. The French Fishing Federation (Fédération Nationale de la Pêche en France) counts nearly 1.6million members split between 3,700 associations, and claims that fishing adds 2billion euros to the economy. And that is only counting people who belong to federated clubs.

Any angler will tell you that fishing is infinitely varied; not just in the species, but the techniques used and the waters fished. People fish from riverbanks, lakesides, piers, beaches, boats and promenades, alone or in groups – meaning there really is something for everyone.

An easy way to find out what fishing is available in your area is to drop into the local fishing shop (search pages jaunes for magasin de pêche).

They often have leaflets about local angling clubs and private fishing lakes, and will be able to tell you where to go for what species. A good source of information about regulations, fishing cards and seasons is Génération Pêche (in French only).

The Lac du Bourget in Savoie, the deepest lake entirely located in France, is reputed for predator fishing, including trout, pike, perch and zander. As well as being stunningly beautiful, there is plenty of space to find a good fishing spot. Try Bourget-du-Lac or Viviers-du-Lac.

Aix-les-Bains however, makes a great base for people less interested in fishing than other pastimes. It has picnic spots, paddle-boarding, walking and bike tours, day cruises, boat trips and bicycle hire. There is a casino, a pool (Aqualac) and several spas and wellness centres.

Aqualis is a museum about the lake, aimed at all the family. The displays are interactive, and there is even an escape game. (Not for under 10s, groups up to five people, must be reserved in advance.) There are also workshops for kids from 4-10 years old.

For culture vultures there is the adorable Musée Faure housed in the Italianate Villa des Chimères, with its collection of Impressionist paintings and no less than 33 Rodin sculptures and studies (the second largest collection in France).

There are works by artists including Paul Cézanne, Edgar Degas, Eugène Boudin, Camille Pissarro, Rodin, Alfred Sisley, and John Singer Sargent. There is also a reconstruction of the room the poet Lamartine stayed in at the Pension Perrier, and a collection of earthenware and ceramics.

'The Sioule Valley, in central France, is a favourite with anglers'

Running from its source near the Lac de Servières, the river snakes through the valley offering a variety of top spots for fishing salmonids, particularly the section between the dam at Queuille to Ebreuil in the Allier.

The gorges, overlooked by the romantic ruins of the Château-Rocher, and the privately-owned Château de Chouvigny, can be explored on foot, by car or canoe. Châteauneuf-les-Bains and Saint-Rémy-deBlot both make good bases, and activities on offer include kayaking and canoeing.

If you love living history, and what child does not, do not miss the Manoir de Veygoux in Charbonnières-lesVarennes. As well as looking round the manor, there are costumes available to rent so the whole family can enjoy recreating the French Revolution, and taking part in a treasure hunt (reserve in advance). It is a very French way of learning French history. Check their website for details of special events this summer.

A small but enthusiastic team run the Musée Automobile in Bellenaves, which is also worth a visit. They have around 50 vehicles dating from 1910 to the 1980s. Housed in an 800m2 hangar that was formerly used for making products from snails, the cars are beautifully restored and maintained by their volunteers. Do not miss the 2CVs.

The River Beaume runs down the Col de Meyrand into the Ardèche. The fast-running, clear water is ideal for trout fishing, and there is the added attraction of Labeaume perched on its spectacular limestone cliffs. In normal times, the village holds a classical music festival from mid-July to mid-August, but nonetheless, it is a very pretty place to explore.

There is a nice walk up the cliffs to the so-called ‘hanging gardens’ and do not miss the Maison Unal, which looks for anything like a Teletubbies house. A series of white bubbles constructed in the 70s, even the stairs are curly.

The Cousin is also reputed for trout fishing, although there are also white fish in some sections. The river runs from Morvan (where it is called the Trinquelin river) past the poetically named Avallon in Yonne (Bourgogne-Franche-Comté) where access to the river is easy and the tree-lined riverbanks are idyllically pretty. Get information about fishing from the half-timbered tourist office in Avallon.

The town itself has a quaint old centre with a lively street market every Saturday where you can buy all sorts of local goodies direct from the producers. The cheese stalls are especially tempting.

Musée de Costume, run by two elderly sisters, is extraordinary. Far from the usual dummies in glass cases, the clothes are displayed in a dozen rooms filled with period bric-a-brac – including the drawing room, dining room, bedroom, dressing room and even a family chapel – giving them real period context. Due to lack of space, only small numbers of people can visit the museum at any one time. A firm favourite with children as well as adults.

Musée de l’Avallonnais has another very charming collection, tracing the history of the town from the Prehistoric Ages to the present day via archaeology, ethnology and fine art. An added bonus is the collection of artefacts, jewellery, textiles and clothing from China, Vietnam, Laos and Thailand, donated to the museum in 2008.

The Tarn River (Occitanie) is stocked with all kinds of predator fish, including enormous catfish which grow up to 2.8metres long and can weigh up to 120kilos.

It is possible to fish very close to the département’s capital, Albi, which offers a wide variety of other attractions, too. It is possible to go fishing with a ‘moniteur guide de pêche’ who will show you the best local spots and help you brush up your technique. If you have never gone after catfish before, it might be worth searching Google or asking in a fishing shop or at the tourist office.

Moniteurs are qualified professionals who organise day outings, fishing weekends, training courses, and even holidays. You can also find one on the website of the moniteurs’ union.

Catching catfish requires a level of physical strength as well as very solid equipment. All kinds of bait can be used as catfish have very poor eyesight.

They can, however, detect the slightest vibration. Contrary to received wisdom, they tend to self-regulate, the larger ones eating the smaller ones. There is a healthy population of them in both the Rhône and the Saône.

Saltwater fishing is also very popular, and as well as fishing from the coast, every resort offers fishing trips in boats. Concarneau (Finistère, Brittany), twinned with Penzance, is one of France’s largest fishing ports.

The modern town stretches out around the port and Ville Close, the historic town centre, is built on a small island in the middle of the port. Access is via a bridge at one end or the ferry at the other, and the cobbled lanes are crammed with restaurants and shops, making it an ideal place for a stroll.

Normally in August the town holds its annual ‘Fête des Filets Bleus’ – blue fishing nets which gave the town its nickname ‘la ville bleue’ – a celebration of traditional culture. But festival or not, there are plenty of chances to appreciate the local fishing traditions.

The fascinating Musée de la Pêche is celebrating its 60th birthday this year with a revamp and a full diary of events. “As well as the refurbishment, we have gone through the archives, re-organised the exhibits, and renewed the displays,” says director Claire Cesbron.

The focus is on fishing at sea and the evolution of fishing at Concarneau; the different species fished and the various methods used. The museum receives around 45-50,000 people per year.

“As part of the celebrations, we are writing an opera about fishing in collaboration with local primary and middle school children, who are doing the choreography. It isn’t possible to put on a live a performance.

“Apart from any other considerations, we just do not have a suitable performance space, so the aim is to film the opera and make a video to be shown permanently at the museum.”

There is still a working fishing port at Concarneau but it is no longer the town’s main industry.

The museum was originally created by an association who realised that life was changing and wanted to preserve the local traditional fishing heritage, and transmit that knowledge to future generations. The museum also looks at green issues, sustainability and biodiversity. The best way to plan a visit is to use the online booking system.

The Marinarium is not your average aquarium; it is actually Europe’s oldest established marine biological research station, founded in 1859. The displays are geared to passing on the knowledge they have gathered, so it is better suited to adults than young children (who would probably prefer Oceanopolis in Brest). It is fascinating, however, and provides an opportunity to see a variety of species up close and personal.

While in Concarneau, visit Château de Keriolet, which began life as a 15th century manor house. In the 19th century it was upgraded by a Russian Princess, Zénaïde Narisckine and her husband Count Charles de Chauveau as a summer home. The result is quirky and charming. In new hands once again, the highlight is the blue and white tiled kitchen.