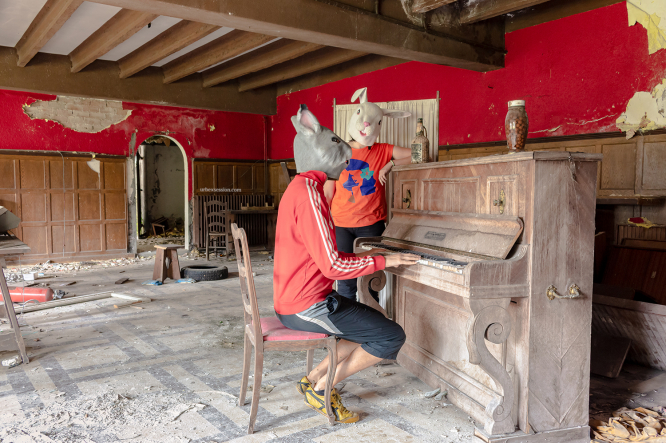 Raphaël Lopez and Marie de La Roche started Urbex by chance in 2013 when they had a weeks’ holiday with nothing planned Pic:

Urbex, short for Urban Exploration, is growing massively in popularity. It involves exploring abandoned buildings, both outside and inside.

The illegal pastime – for that is what it is – has caught on all over the world, but with its hundreds of empty châteaux, France is a particularly rich territory.

Raphaël Lopez and Marie de La Roche started by chance in 2013 when they had a weeks’ holiday with nothing planned: “I have always been attracted by the unusual,” said Raphael, “so I put ‘abandoned places’ into a search engine and found plenty of information on where to go, particularly on English-language sites.

“We enjoyed our week so much it became a passion and before we had children we would spend a month every summer exploring not only in France but in several other countries. Now we go away for a long weekend when we can.”

The couple have two websites where you can see the photographs and videos they take. Some are for sale.

They have been in several empty castles, but also banks, commercial centres, hospitals, planes, boats, hospitals, laboratories, orphanages, and even a deserted zoo and attraction park.

Their hobby has taken them to 15 European countries and to Japan. Sometimes they are in their photos, but always disguised with rabbit masks, the identity they created for themselves when they started out.

They have just published a book, Urbex Session: “A publisher saw our photos and approached us. The visuals are accompanied by fictional stories I write inspired by the places we visit. It combines my two passions of writing and exploring.”

'You are alone in a deserted building, in a timeless moment'

He said the attraction is exploring the unknown: “You are alone in a deserted building, in a timeless moment, and never sure what you will find.

“There is an element of fear. You know you should not really be there, and that maybe someone will come and surprise you. You have to be careful where you step, in case a floorboard gives way.

“There is no electricity so corridors and rooms are dark, mysterious and spooky.”

It is like a treasure hunt: “It is surprising what you find. In hospitals we have found documents relating to patients, left on a desk. In a chateau you might come across old photographs of former inhabitants.

“Sometimes there can be quite beautiful furniture and personal items. We never take anything, of course, but have an intriguing glimpse into a past life.”

What they are doing is illegal, as they are trespassing on private property. However, Mr Lopez says he has never been challenged: “I have a sixth sense about these kinds of things, and if there is any doubt, I will not go in. Most places are truly abandoned, so no-one is likely to find you, and we cause no damage.”

Since he started, he says, Urbex has exploded in popularity, with groups showing their photos and videos on social media, encouraging others to join in: “In 2015-2016 more and more videos appeared on YouTube.

“I thought it would not last, but it keeps on growing. Originally it attracted people in their thirties and forties.

“I even met a group of children wanting to follow in the footsteps of their YouTube heroes. But I discouraged them, because they are unlikely to see the dangers from a broken window or unsafe floor. It used to take hours of research to find somewhere to visit, but now you can easily find locations on websites.”

'Empty buildings are part of evolving social history and life'

He thinks there will never be a shortage of buildings to explore – and that soon there will be more: “Covid-19 will surely lead to restaurants, discotheques and hotels closing down. It is sad, but empty buildings are part of evolving social history and life.”

See France through the eyes of a cat

18th century château in southwest France up for auction from €90,000
17 June 2021
More from Explore France
More from Connexion
Get news, views and information from France
Join the newsletter
Subscribe to The Connexion