Building on a millennium of Franco-German influences 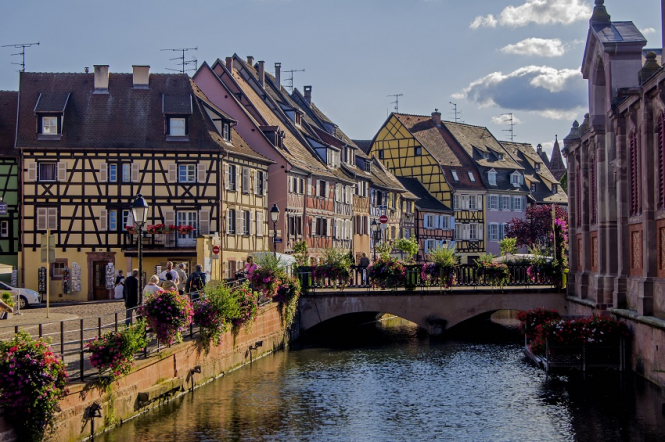 The colourful fishmongers district in Colmar
By Jane Hanks

It is no surprise that Colmar, with its pretty, coloured half-timbered buildings and Little Venice area, where you can row along the canal past picturesque waterside houses, is hugely popular with tourists.

The historic centre of the town – with 58 buildings classed as monuments historiques – survived both world wars largely intact.

It is now a protected area (secteur sauvegardé), which means any new construction, restoration or demolition is strictly controlled.

Every year tourists from all over the world visit. One, the prime minister of Malaysia, was so impressed that he had a reconstruction built in the jungle near to Kuala Lumpur (see here).

Emmanuel Fromm, the town’s communications director for tourism (tourisme-colmar.com), said: “It is true to say you can see 1,000 years of architectural history in Colmar. When visitors come here, they are amazed by the variety and detail to be discovered.”

Enlightenment writer, historian and philosopher Voltaire lived in Colmar for 13 months between 1753 and 1754 and described it as “half-German and half-French”.

The Haut-Rhin town’s unique architectural heritage is due to its many influences from both Germany and France, from both the Catholic and Protestant religions, and from its wealth down the ages.

This allowed residents to design unusual and often extravagant buildings according to their individual taste.

The predominance of half-timbered buildings is due to the strong Germanic influence in the area. The wood is mostly chestnut and the colour of the infilled parts varies from house to house as Bâtiments de France has forbidden the use of white, to avoid it becoming the dominant colour.

On many façades, engravings give information about the original owner of the building. An oft-repeated symbol is a five-pointed star, which was the emblem of the breweries, common in the town.

In Little Venice there is the Fishmonger District where the professional boatmen and fishermen used to live and sell their catch. In 1706, a fire destroyed more than 40 buildings, and many of their half-timbered façades were restored between 1978 and 1981.

There is also a tanners’ district, where the houses are taller than in other areas, with six floors and a well-ventilated attic at the top for drying skins.

There are buildings in the German Renaissance-style with typically high, scrolled gables, such as the House of Arcades, which was built in 1606.

Shortly after, in 1609, its architect Albert Schmidt built one of the most famous constructions, the House of Heads. It was created for a merchant, Anton Burger, and the fact it was built in stone and not wood shows he was wealthy. It is decorated with 106 heads and grotesque masks.

It was built in 1537 for a wealthy hatter, Ludwig Scherer. It has an elaborate oriel window, a carved wooden balcony and hand-painted exterior panels, which depict both lay and religious scenes, including 16th-century German emperors and the four Evangelists.

The oldest public building is the Koïfhus, the old customs house, which was started in 1433 and finished in 1480. Its roof is decorated with another German architectural influence: painted, varnished tiles in different colours which make geometric patterns on some of the roofs.

It initially had two purposes: on the ground floor there was both a warehouse and a taxation centre for imported and exported goods.

Above was the meeting place for the Décapole, the federation of 10 imperial Alsace towns created in 1534, and a court.

After the revolution, the merchants were no longer allowed their privileges and it became a theatre, a chamber of commerce, a Catholic school and then a Jewish school. Today it belongs to the town and is used as a municipal building.

Since the 13th century, the Dominican and Franciscan religious orders have left their architectural stamp, with vast churches and monasteries, which have changed use over time. Three have been turned into a museum, school and prison.

Later buildings have a more classic French style, such as the Prefecture, which was built in the style of Louis XIII in 1866. There are also art nouveau buildings from the beginning of the 20th century, notably Villa Boeschlin and Maison aux Raisins.

Just because it has a protected heritage centre does not mean there is nothing from the 21st century. In 2015, a new wing of the Musée Unterlinden was opened, designed by Swiss architects Herzog and de Meuron, also known for the Tate Modern 2 and the Serpentine Gallery Pavilion, both in London, and Bordeaux’s Matmut Atlantique football stadium.

“There is so much to see for such a relatively small town,” said Mr Fromm.

“It is difficult to give details of a typical style because each building is so individual. From early on the town was wealthy, because though it is not next to the Rhine, it is still on an important trade route through Europe and is right on the edge of the wine-growing area.

“It is known as the wine capital of Alsace.

“The richer merchants would build entirely in stone. With less money they would use stone for the street façade and wood behind. Both Catholics and Protestants lived here and the former were more showy with their wealth.

“Originally, there were few straight streets as houses would be built according to the owners’ desires, which might not include a flat front in line with the neighbour.

“It was only later, when houses had to be rebuilt after the many fires in the wooden constructions, that any attempt was made to make the streets straight.”

Mr Fromm said Colmar is still a bustling, thriving commercial centre: “The listed buildings have not become dusty museums but are lived in, used as offices, shops, restaurants and homes.

“Unlike many modern town centres with increasing empty shop windows, we have just 4% which have closed, in comparison to 10% on average. There are 200 restaurants, many of them in historic buildings.”