Inventors remembered in the museums of France 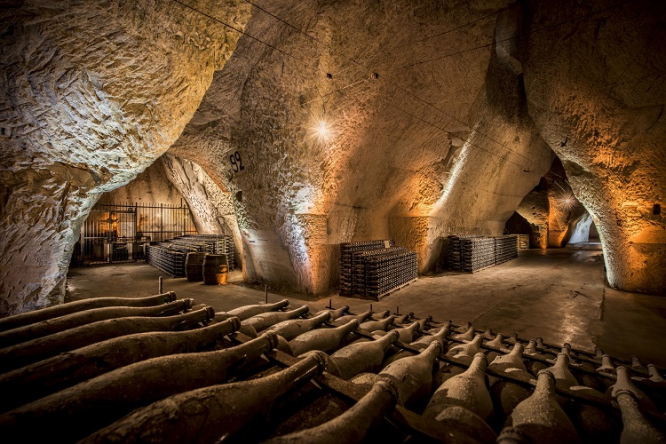 Veuve Clicquot’s cellars, where vintage bottles of the house’s Champagne are stored
By Samantha David

The list of ingenious French inventions, from the humble biro to the development of smart online media player system DivX, is impressively long.

Where would we be without – to take a few examples – photography, aspirin, Etch-a-Sketch, artificial silk, the oboe, roulette, neon lighting, the calculator, spirit level, steamboats, the parachute, hot-air balloon, the stethoscope, or pencil sharpener?

These are inventions that have changed the world, often in small but meaningful ways – but their names do not reveal much about whose brainchild they are, although it does not take much guesswork to realise what Poubelle and Braille gave us. Luckily the homes of some of France’s genius inventors are open to the public.

Any excuse for a road-trip around the Hexagon is a good one, but visiting the places where geniuses invented the modern world is inspirational.

Reims is a great place to visit.

It has a fantastic cathedral, a brilliant automobile museum, a fort, a Musée des Beaux-Arts, a planetarium, and a museum containing the actual room in which Germany signed the surrender documents ending the Second World War.

But the main attraction is champagne, all of which owes much to the woman who invented ‘remuage’ – a way of making the sparkling wine dry and crystal clear.

Madame Barbe-Nicole Clicquot (1777-1866) took on her husband’s wine business when he died, leaving her a widow at the age of 27, and became so successful that she became known as the Grande Dame of Champagne.

At that time, sparkling wine was cloudy and sweet – not really valued as a drinking wine at all.

Mme Clicquot developed remuage (riddling) which cleared the sediment left over from the yeast used to make the wine ferment in the bottle.

By gradually tipping and turning the bottles each day until all the sediment was in the neck of the bottle, she discovered it was possible to remove it completely before sealing the bottles with corks and wires. Using this method, sparkling wines from champagne became much favoured, the sweetness easily controlled, the wine itself clear, golden and filled with tiny dancing bubbles.

The method is still used today, although the tipping and turning process is now mechanised and the sediment is removed by freezing the plug of sediment rather than pouring it out.

Her skill as a wine-maker and a businesswoman meant that by the time she died she had completely reconstructed the Château de Boursault for her daughter Clémentine Clicquot, the Countess of Chevigné, and was selling 750,000 bottles of champagne a year all over Europe.

The cellars of Veuve Clicquot are open to the public, and various tours and wine tastings are available.

Book ahead to avoid disappointment (veuveclicquot.com/en)

Travelling south, Lyon is stuffed with fascinating museums, but one of the best is Musée Lumière.

Auguste and Louis Lumière did not invent ‘moving pictures’ alone, but they patented some significant developments, including the perforations down each side of a reel of film which allows it to be pulled through the camera at an even rate.

They also patented a new version of a cinématographe in 1895 and shot a film of their workers leaving the factory on it.

Their 50-second film L’arrivée d’un train en gare de La Ciotat is said to have caused a stampede among terrified customers when it was shown in Paris in 1896.

The brothers saw moving pictures as a novelty and by 1905 had stopped working on them in favour of developing the first practical photographic colour process, the Lumière Autochrome, which is a whole other story.

The museum tells both in detail.

La Villa Lumière is a beautiful house in its own right and some rooms have been left as they were when the brothers were still alive, but the main part of the house is occupied by a museum detailing the history of cinema right from the very first footage to the modern day.

There is also an arts cinema, housed in what used to be the film factory at the back.

If you are really interested in the subject, allow at least three hours to digest everything.

Incidentally, the Museé Miniature et Cinema (museeminiatureetcinema.fr) in Lyon’s historic old centre is also worth an hour or so if you are a silver screen dreamer.

It is slightly dated now, but is filled with enough miniature sets, costumes and special effects from a variety of feature films to make it worth a look.

Just 30 minutes north of Lyon by car is the house of André-Marie Ampère (1775-1836) which now houses the small but perfectly-formed Musée d’Electricité, run by a volunteer association.

An old-school approach means much of the equipment on display is familiar to anyone who went to school in the last century, but the explanations about how electricity works are fascinating to school children and adults alike.

Ampère himself is a riveting character: a self-taught physicist and mathematician, he gave his name to the electrical amp, and invented the solenoid, the electrical telegraph and is generally credited as having developed electromagnetic theory.

His is one of the 72 names of scientists and mathematicians engraved on the Eiffel Tower. Ring for opening times.

The best place to see a lot of hot air balloons in action is the Montgolfiades de Rocamadour (26-27 September 2020) but to find out more about the brothers who invented them, go to the Musée des Papeteries Canson et Montgolfier in Vidalon, an hour south of Lyon.

It is tricky to find but worth the haul because not only will you discover loads about Joseph-Michel (1740-1810) and Jacques-Etienne Montgolfier and (1745 - 1799) their fabulous inventions, but also everything you ever wanted to know about manufacturing paper – the brothers even invented a way of making transparent paper.

The machines are often working and if you go on the right day (phone first because opening hours and days are restricted) your children can help make their very own note paper.

Jeanne Villepreux-Power (1794-1871) was a marine biologist who was so fascinated by sea-life, that in order to study it better she invented the aquarium.

Born in Juillac (Corrèze), she walked 400kms to Paris when she was 18 and became a dress-maker, celebrated for making Princess Caroline’s gown for her marriage to Charles-Ferdinand de Bourbon.

In 1818 she married a British merchant, James Power, and the pair moved to Sicily where she studied natural history and invented three types of aquarium (one glass one for her study, one submersible glass one in a cage, and a cage for larger molluscs that would anchor at sea).

The two books she wrote on the subject became standard reference works, and she became a correspondent member of the London Zoological Society as well as 16 other academic societies.

Artist Anne-Lan, founding president of the “Jeanne Villepreux-Power” association, says one reason she is not well-known is that most of her equipment, research notes, artworks, and collections of marine specimens were lost in a shipwreck when she moved back to France from Sicily.

“Also, her house in Juillac was demolished to make way for a road, and the graveyard where she was buried has likewise been redeveloped. So there are not many traces of her life.”

She is, however, having a retrospective exhibition of her paintings on silk, from 2-24 May, at the Chapelle St Libéral in Brive, part of which will be dedicated to Jeanne Villepreux-Power.

Also look out later in the year for a bande dessinée by Yannick Lelardoux about her life and achievements.

The guide encourages visitors to try writing and reading in Braille.

There are just three rooms: the first displays all kinds of artefacts to help blind people; the second is where Braille was born and brought up; and the third is his father’s leatherworking studio.

Louis Braille lost his sight at a young age as the result of an accident in the workshop.

The wound became infected, the infection spread to his other eye and he went completely blind.

He still went to the local school, however, and his parents eventually managed to get him a grant to go to the Institution Royale des Jeunes Aveugles founded in 1874 by Valentin Haüy.

He became a model student, learning to read by touch the relief letters sewn onto fabric.

But the method did not allow pupils to write.

By the age of 15, Braille was already teaching younger pupils.

By 16, he had invented the Braille alphabet and when he was 18 the ‘grammaire des grammaires’ was published in Braille.

Two years later in 1827, when he was still only 20, a textbook was published describing exactly how Braille works, and how words can be written and read using the system but also music.

Joseph Nicéphore Niépce (1765-1833) created the world’s oldest surviving heliograph, a photographic print made from a photo-engraved printing plate in 1825.

The house is only open in July and August but the museum is open all year round.

The Niépce brothers were endlessly inventive, also coming up with an internal combustion engine and ideas for a prototype motorbike – and the museum traces their lives and all their inventions.

This year, as an added bonus, until May 17 the museum is running a retrospective exhibition of Jean-François Bauret’s photography from the 1960s, focusing on the role of photographic images in post-war advertising and sexual liberation in the 60s.

Entitled Percevoir, Recevoir the exhibition includes 400 photographs in a variety of styles.