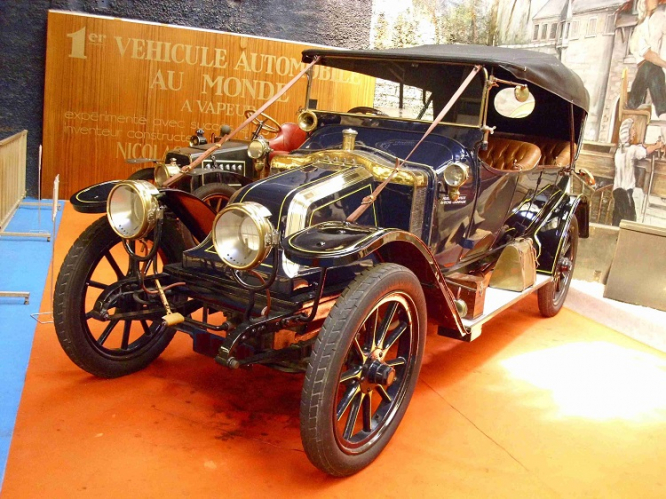 The Gallic love affair with cars is passionate, intense and ongoing. From the beginning, the French have been petrolheads, and if today they are starting to embrace electric cars, it is only because nothing will come between them and their cars.

Races like the Monaco Grand Prix, the Le Mans 24 Hours, and the Pau Grand Prix draw huge crowds, as do events featuring vintage cars, like the Circuit des Remparts in Angoulême.

It is no accident, either, that France boasts three internally renowned automobile manufacturers and has produced some iconic cars.

Everyone recognises the Citroën 2CV, Renault 5 (and 4 for that matter), the Peugeot 205 – and what World War Two movie would be complete without a black Citroën Traction Avant nosing through the mist?

Let us not forget that the Citroën DS is one of the sexiest cars ever built. Sorry, all you E-type lovers, but the DS just oozes red wine, Gitanes and seduction. What else do you expect from a car baptised ‘Goddess’? Yes, the French pronunciation of ‘DS’ sounds like the word ‘Déesse’...

It follows, therefore, that France has some of the best automobile museums in the world, and exploring them is a great way of seeing the country – as well as sharing a little four-wheeled passion.

The Musée Automobile de Reims-Champagne was founded in 1985 by Philippe Charbonneaux (1917-1998), an industrial designer who created the famous Chevrolet Corvette.

Back in Paris in 1951 he presented the world with the Delahaye 235, and went on to design anything and everything including motorways, toothbrushes, fork-lift trucks, lamps, toys, white goods, the Bull computer, alarm clocks, and TVs.

He was also a painter, illustrator and an architect. His private collection was the foundation of this museum which contains more than 160 cars, 70 bicycles, 100 pedal cars and thousands of miniature cars dating from 1908 to today.

The motorbikes on display range from famous French models to Vespas and Lambrettas.

It is now run by the PAAARC association of vintage car lovers, who continue buying and restoring cars, many of them very rare. Between them, the members own around half of the cars and drive them regularly, which means the displays change all the time.

The association offers parking and workshop space to members who are restoring one or more old vehicles.

Membership is €235 a year and newcomers are made very welcome. For information, log on to the website: musee-automobile-reims-champagne.com

The Cité de l’Automobile, which houses the Schlumpf Collection, is the largest car museum in the world.

Occupying a massive former textiles factory, it was founded in the late 1950s by Schlumpf brothers Hans and Fritz to house their private collection of cars, and includes cars from every era of automobile history

It also features a fabulous selection of Formula 1 racing cars, and a stunning range of Bugattis. In 2020 they are running a special exhibition to celebrate the 110th birthday of the Bugatti.

Do not miss the ‘mascots’ collection, little statuettes that were fixed to radiator caps until 1958.

Some manufacturers constructed cars with these already in place but car owners could easily buy a new mascot radiator cap in order to present their own image to the world.

There are plenty of refreshment options, from a café to a proper restaurant, so you can make a day of it.

Outside, there is an ‘Autodrome’ for demonstrations, and if you visit from June to September, you can catch their show, On Track! 18 Emblematic Cars Tell Their Story which is performed at weekends and Bank Holidays and traces automobile history from 1870 to today.

The museum also has a full agenda of other events in the summer months, so check www.citedelautomobile.com/en before organising your visit.

The Musée de l’Aventure Peugeot in Sochaux on the outskirts of Montbéliard, is only 45 minutes from Mulhouse in a car for anyone determined to achieve max-car-museum in a day!

Having two such museums almost side by side is an honourable testament to this hardworking corner of France, with its industrial heritage.

It was founded by Pierre Peugeot who aimed to include every single product made by Peugeot since it began in 1810, including saw blades, corsets, coffee grinders and sewing machines. But the museum - like the company - is really all about the cars.

There are also some commercial vehicles, bicycles and motorcycles, running right through from the 1882 Grand Bi to the 1987 ST Scooter.

Motor sports have their own section, particularly Le Mans, in which Peugeot has been outstandingly successful.

If you’re seriously into cars, you can also book a guided tour (in English) of the PSA Peugeot-Citroen factory, which is one of the most modern in Europe.

Don’t fall into the trap of thinking this is a glorified salesroom for Peugeot; this is a genuine museum with a fascinating story to tell about French industrialisation.

Another magnet for car lovers is in Lohéac (around 60km outside Nantes).

The Manoir de l’Automobile museum contains more than 400 cars, including an extensive collection of Renault Dauphines and Formula 1s.

There are also dioramas, more than 3,000 model cars, an open air circuit, a Formula 1 grid, films and a 1930s guinguette.

Every October there is an autobrocante where collectors buy and sell cars, spare parts, photos, books and other paraphernalia.

Another museum born from a passion for cars is the Musée Automobile de Vendée, the brainchild of Gaston Giron, who started out as an apprentice mechanic during the First World War and became a trader specialising in Citroëns, in particular the iconic Traction Avant.

Just before the war he bought a Peugeot Lion in order to prevent it being scrapped, and after the war his collection grew.

By 1967, he had 30 cars on display in a makeshift space, but in 1976 he and his family moved to Talmont-Saint-Hilaire near Les-Sables d’Olonne and opened a museum containing 80 cars.

Today, his son has taken over and the museum contains 150 vehicles of 45 different makes from the 1885 steam powered De Dion Bouton to the latest concept cars from Italy.

Needless to say, the family drive many of the cars, and are still collecting and restoring cars at a rate of three to four vehicles per year. They also sometimes sell classic cars, and spare parts.

Classic and vintage cars are a major passion in France, and in the summer it can seem as if every tiny village has its own vintage car rally.

Vintage Days in Périgueux on the last weekend of August is a great example. (perigueuxvintagedays.com)

The entire town is taken over by classic cars from all eras; everyone dresses up in costumes from every conceivable era, there are parades, a vintage market, free 50s hair and make-up stands, displays, demonstrations of dancing, music and driving, and a competition for best theatrical presentation of a vintage car.

This involves the drivers and their passengers dressing up and enacting a one to two-minute scene in front of the judges and a large crowd of car fanciers.

In Paris, of course, the annual Salon Rétromobile at the Parc des Expositions (February 5-9, 2020) is a huge show, with amazing displays and exhibitions.

This year there will be a display of 30 historic tractors to add to the attractions of 1,000 vehicles on display, and 120 automobile clubs from all over France hoping to sign up new members.

There will be demonstrations, visitors will be able to ride in century-old cars, and 620 stands will be offering parts, photos, magazines, models, cars, magazines and anything else the car-lover’s heart could desire.

There will also be a special section devoted to sports cars of the 90s. www.retromobile.com