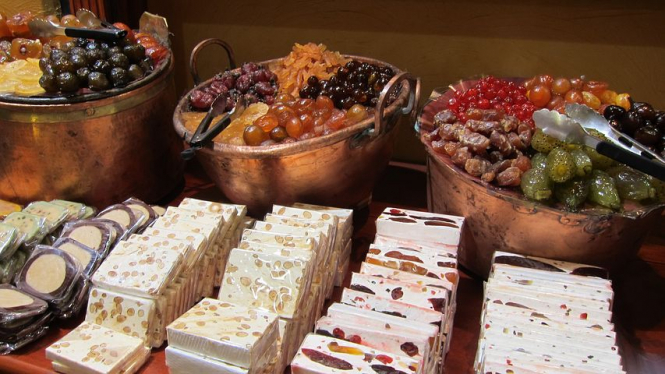 Around the country in sweet treats

The French love sweet things – from breakfast croissants to delicate after-dinner chocolates. Apparently, 80% of the country’s delicious bonbons are eaten by adults... quite rightly, too. A sweet treat tour is a fabulous way to explore France – with or without children – and finding out their history and how they are made just makes it all better.

Some traditional family-run confectionary companies in France have set up their own ‘museums’ explaining their history. To be honest, you are likely to be disappointed if you are expecting something along the lines of the Louvre. But, lower your cultural expectations a little, and you are in for an unexpected treat.

Some ‘museums’ are workshops, others little more than gantries overlooking the factory. Some are just one room. Many simply explain the firm’s history and give a few details about the sweets they make – but they are all strangely attractive, with their little displays, and somehow make buying sweets more of an event. Many are free, and in Montélimar – where you do have to pay – the entrance tickets are edible. All are worth exploring, especially if you have a sweet tooth, and prefer to know the provenance of your empty calories. Try to visit on weekday mornings, if you can, when production is most likely to be in progress.

Calling all those with sweet-tooths: here's where to find the juiciest, sweetest melons in France this summer

Elegant, cultured, leisurely Aix-en-Provence has many attractions, from shady boulevards to a rich cultural offering. But the sweetest treat of all lurks inside the Musée du Calisson, attached to the Confiserie Le Roy René building. Calissons (meaning little hugs) are made from a paste of ground almonds and candied fruit (traditionally melons and oranges) topped with royal icing and cut into distinctive diamond shapes. The texture is like marzipan but the flavour is definitely fruity, and very scrumptious they are. Most of the world’s supply of calissons are made in Aix-en-Provence, so you are unlikely to come across them anywhere else.

Calissons are thought to have originated in medieval Italy, where a ‘calisone’ was a cake made with almonds and flour. Venetians are also thought to have exported ‘kalitsounia’ made with marzipan, nuts and spices to territories, including Crete. Almond orchards were established in Aix-en-Provence in the 16th century, which is probably when calissons became popular in the area.

Entrance is free and you can rent an audio guide in English or French for €3 if you want more detailed explanations. Children will love gazing through the windows and watching the production process on the factory floor below. Having played with the interactive displays and learned all about their history and manufacturing, it’s nice to buy a few calissons in the shop on the way out.

Interested to learn more about calissons? In this article, we delve into the classic French confectionary's history

Montélimar is renowned for its nougat, made with whipped egg whites, honey or sugar, roasted nuts and candied fruit. Nougat comes in three basic kinds; chewy white nougat made with egg whites and honey, crunchy brown nougat, made without the egg whites, and Viennese nougat, which is more like a chocolate and hazelnut praline.

The Musée du Nougat at the Fabrique Arnaud Soubeyran is worth all of the modest €3 entrance price. Kids will love the videos, the windows overlooking the factory, the real bees, and the nougat samples as well as the special children’s ‘discovery trail’. The tea room is also worth a visit – and you get free nougat with your coffee. That isn’t all, however. Just beside the tourist office is another nougat maker, the Chaudron d’Or, which offers free visits to see the nougat being made by a charming young couple who have recently taken over the business.

L’Artisan Nougatier lets visitors watch nougat being made, too. There is also the slightly battered Palais des Bonbons du Nougat et des Souvenirs, which includes children’s toys through the ages as well as a variety of confectionery. There is a small café, and they also host children’s birthday parties if you book ahead. Needless to say there is also a shop selling... well, you know what. Hyperactivity brought on by excessive nougat consumption can be dissipated in the fabulous park near the railway station, which has a small animal farm, a children’s playground, a duck pond, a skate park, a carousel and trampolines.

You may not have heard of Valençay, l’Indre, but it has more than one claim to fame. It happens to be the place where the Special Operations Executive (SOE) – Churchill’s so-called secret Second World War army of resistance workers and spies – made their first French parachute drop on May 6, 1941. The impressive SEO Memorial, known as the ‘Spirit of Partnership’ was erected to honour the 104 members of F section who died for the liberation of France.

The other distractions from the sugar trail are a promising car museum, and a stunning chateau which you really should not miss. For sugar sleuths, the draw is the Musée du Sucre d’Art. It is really a display attached to a small café and pastry shop, Castel Praliné, but you still have to go (you will pass it as you leave the chateau) because it has a model of the Château de Valençay made out of sugar, and a sugar car, and a ship! And you can buy handmade pâtisserie in the shop.

July's monthly money saver tip: how to visit museums in France for free

The charming riverside village of Moret-sur-Loing (Seine-et-Marne) is worth a visit, even without the lure of the local barley sugar, reputed to have been created by Benedictine nuns in 1638. You get to the Musée du Sucre d’Orge over a photogenic wooden footbridge. It is nice to learn that before the 18th century, sugar and spices were thought of as medicinal; believed to be a cure for the common cold, Louis XIV is said to have been fond of barley sugar from Moret.

Elizabeth Pidoux, the first Mother Superior of the order, is credited with inventing barley sugar while experimenting by boiling down cane sugar with barley water and water to make remedies. It became very profitable for the nuns, who continued making it until the Revolution, and who returned and restarted the tradition in 1853 until the order was dispersed in 1972.

The recipe was passed to local confectioner Jean Rousseau by Sister Marie-André, and he established the barley sugar museum in 1995. It has been managed by the local council since 2012 when the right to manufacture ‘Sucre d’Orge des Religieuses de Moret’ was transferred to Des Lis Chocolat of Nemours.

There is another of these small museums down towards Spain in Cordes-sur-Ciel (Tarn), a stunning village perched on a mountain peak looking like caramel on top of an ice cream. The Musée de l’Art du Sucre et du Chocolat is two rooms full of what look at first like ornaments and delicate sculptures. There’s a violin, a wooden cartwheel, a glossy nude woman, a sailing ship and a model of the village, but look closely and you will see that they are all made of sugar and chocolate.

They are the work of Yves Thuriès, who has twice been voted best pastry chef in France. He started the exhibition in 1989, and has added to it over the years. Bake Off fans will be lost in admiration of these amazing creations, and especially the tastings at the end. The staff are knowledgeable about the process of chocolate making; even about growing the beans. The boutique is beautiful and sometimes they offer workshops where you can learn how to work with chocolate yourself.

Plainfaing in Vosges is less than an hour from Colmar by car, and is a favourite weekend destination for skiers in the winter, and walkers in the summer, who also like to scramble up the ‘Gazon du Faing’ and enjoy the view at the top. In the village itself, the Confiserie des Hautes Vosges has its own museum where you can watch traditional boiled sweets being made. Painted bright pink and decorated with sweets and images of confectioners at work, the place is really not tricky to find and – once inside – it is impossible not to be fascinated by all that boiling sugar.

Big copper pots are stirred and tipped by machines, while workers dressed in white preside over massive tables of candy, which has to be kneaded almost like bread, to obtain the right texture. And then fruit flavours are added and the candy is pressed into moulds.

Flavours include fir tree, eucalyptus, poppy, bergamot, violet, mint, ginger, red fruits, liquorice, raspberry, blackberry, lemon, orange and mandarin. The factory produces a massive variety of ‘bonbons de Vosges’ using simple, traditional methods, and of course you can buy a selection in the shop on the way out. The factory attracts 220,000 visitors a year and entrance is free.

Collobrières (Var), just slightly inland from the Mediterranean coast, is enchanting. A fairytale village, it looks like a film set and is renowned for its candied chestnuts (marrons glacés). Better still, it has some attractions guaranteed to keep the family happy. The Confiserie Azuréenne makes marrons glacés and has a small museum attached, where you can find out how they do it.

You will not be able to resist the shop, selling marrons glacés galore including cognac ones, as well as candied fruit, ice creams, chestnut honey and different jams and spreads. Try the chestnut and rum ice cream, which really is something to write home about. After all that excitement, it might be time to calm down and enjoy a different kind of sweetness. The Chartreuse de la Verne, just outside Collobrières, does not sell liqueur but is possibly one of the most peaceful places in France.

The views are stunning and the atmosphere is soothing. You cannot see them and you cannot hear them because the nuns who live here are a silent order, but perhaps you can sense their serenity as you wander through the nunnery. An ideal place to relax and enjoy nature’s sweetness – with no added sugar.

Still craving a sugar hit? Learn how to create perfect pâtisserie puddings at home with these recipes