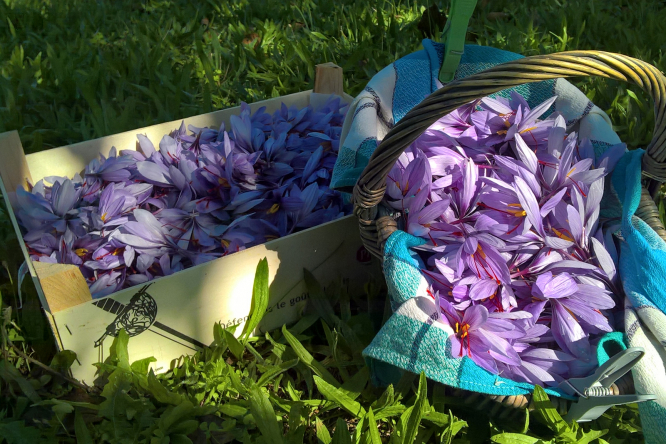 'The saffron is at its best when it is two years old, when the flavours are at their strongest' says grower Françoise Laval Pic: Courtesy of Françoise Laval

October is harvest time for saffron, one of the most expensive spices in the world. It is grown in Quercy, an ancient region in the south-west, which includes the Lot and parts of neighbouring departments.

Here, Crocus sativus has been grown since the Middle Ages and was probably introduced from the Middle East via the crusades in the XIth century and by the Arabs who settled in Spain.

A flourishing trade developed and Quercy saffron had an international reputation, and was particularly prized in Germany and Norway up until the beginning of the 19th century, when its popularity waned.

In 1998, some local farmers had the idea to produce it commercially again, as there was a resurging fashion for spices and home grown products. Families had continued to grow a few crocuses in their potager, and some of these were used to launch the idea. Now there is an association with around 50 producers selling under the Safran du Quercy label, with strict rules, guaranteeing quality.

Françoise Laval was one of the first to join the association, and has been growing the bulbs for 22 years. She has recently retired, but continues to grow the purple- petaled crocus she has become passionate about:

“I have always loved flowers and when I read in a local newspaper that a group were relaunching saffron, I was attracted by the idea, and went to a meeting. Eventually, I gave up my salaried job, and concentrated on saffron, and grew fruit bushes alongside, as you cannot live from saffron alone.”

The autumn crocus thrives on the well drained limestone soil of the Quercy. The bulbs are dormant in the summer months, when they can be dug up, divided, cleaned, dried out and replanted: “We replant every three years as the bulbs are best in their second year. In the winter the bulbs divide and form new ones. In late spring, early summer, the leaves will disappear and the earth will be bare.

Before planting we prepare the soil, because although they will grow with not very much water, they require a nutritious soil. A tip for anyone who wants to grow them in their garden; do not put them in a vegetable or flower bed where you will water often in the summer. They hate sitting in water.”

The crocuses flower over a period of tree to four weeks in October: “Every morning we pick them just after the morning dew, before they have opened, because if they are too long in the sun, they will be covered in pollen, and not as clean as we need them. We go every day, and only pick the ones which are ready. Then it is a long and delicate job opening up the flowers and picking out the three red thread-like stigmas, which are then dried for 20-30 minutes in a dehydrator.”

The association has strict rules. Anyone who smokes is banned, because the tobacco will taint the delicate saffron flavours. It is labour intensive, but very difficult to employ extra manpower for such a short season. Mrs Laval calls on family and friends and turns it into a party:

“We work, chat and tell stories, just as in the old days when people gathered round the fire to shell walnuts. At the end we share a drink and a piece of cake.”

The end result is measured in grams: “When I was in full production I had around 300,000 flowers, which produced 400 grams, and that was a huge amount. Last year, I had around 100 grams, and I still sell to anyone who is passing by.”

She loves her saffron: “The taste is slightly bitter, mixed with honey and sweetness. It brings all the flavours of a dish together, like the conductor in an orchestra, and you taste the saffron overtones at the end. It is beautiful. If you put a spoonful of saffron jam with its red strands onto a white plate it shines a wonderful colour, and it brings a ray of sunshine into a dull winter’s day.”

'You can create the most miraculous dishes with saffron'

She also loves to cook with it: “You can create the most miraculous dishes. It is a dream with white foods; pears, peaches, apples and quince, rice, fish and chicken, leeks, asparagus and courgette. Every year for the village fête, I make courgette and saffron soup, and it is very popular.”

The secret, she says is in conserving the saffron well, and then to let the flavours infuse for several hours:

“The saffron is at its best when it is two years old, when the flavours are at their strongest, but it can be kept for at least five years, if not more. They say it is worth its weight in gold, but if you use it at its peak it is not overly expensive, as you need very few strands. It should be stored in a glass jar, away from light and humidity.

“You should avoid cooking the dish with the saffron in it, wherever possible, but add it at the end of the cooking. I always make my courgette soup the night before, add the saffron after taking it off the heat and let it stand for as much as up to a day. That is more difficult with a risotto, where it is a classic saffron recipe, but instead you can make the stock you will cook the rice in the day before, to let the flavours develop.”

Claude-Emmanuel Robin would agree, and he has the scientific proof to back it up. He is a chef and his restaurant L’Allée des Vignes, in Cajarc, has both a classic Michelin star and a green star, for his sustainable approach to his cooking.

He is also the first person to have created a company, Latitude Safran, with a patented method of getting the most out of saffron: “I wanted to find out all I could about this spice and have spent around €30,000 in research. I have had the filaments analysed in laboratories. The first discovery was that Quercy saffron is indeed the best in France for flavour and better than many imports. Then there were tests to see how many filaments infused in how much water, at what temperature and for how long, would give the best flavour. After several trials we have found the best results.

“I have also found out how to always produce the same effect using different mixes of different grades of saffron. I now have a magic formula which I have patented. My company is dedicated to saffron and developing saffron flavoured products, such as foie gras, biscuits, cheese, beers and other alcohols, conserved fruits and vegetables. I have started selling my eau de safran to restaurant chefs, who are happy to use the best taste saffron can give.”

He says it gives a new life to this wonderful spice: “You can buy saffron cordials everywhere, but they have all boiled the saffron with the water and sugar. If you add the saffron at the end, the result is completely different. Saffron is versatile and I have a menu with this spice used in both savoury and sweet dishes.”

Every year Mr Robin contributes to the Fête de Safran at Cajarc, which takes place on the fourth weekend of October with organised visits to producers, harvesting demonstrations plus a market with saffron products and restaurants offering saffron dishes.

Who still has to pay the taxe d’habitation in France in 2022?
22 January 2022
More from Food and Drink
More from Connexion
Get news, views and information from France
Join the newsletter
Subscribe to The Connexion