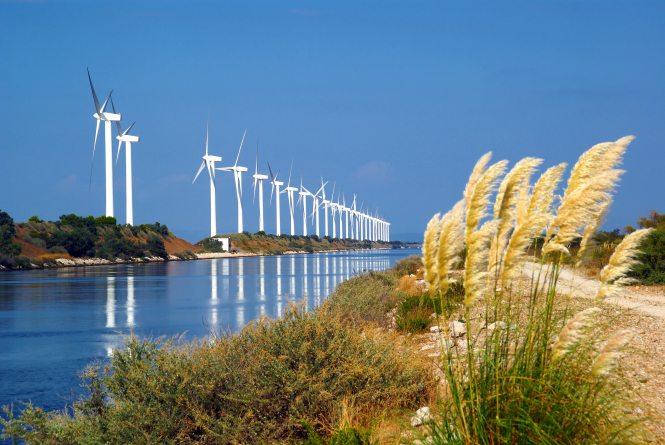 More parts of France need to be opened up for wind power, says France Wind Energy head, Michel Gioria: 'The 47% of the territory that is currently closed to wind power must be gradually opened up' Pic: Lamax / Shutterstock

Anti-wind turbine feeling is so strong and widespread in France that almost two thirds of installation plans are currently being disputed in the courts.

France Wind Energy, the operators’ union, estimates that 65% of turbine authorisations are contested.

The expansion of wind turbine projects in France is a key government strategic objective for energy transition, with around 6,000 masts set to be erected by 2028. In theory, the power capacity should increase from 17 to 24 gigawatts within two years.

The projects – which can benefit communes thanks to tax breaks – are especially common in the north of France, where there is plenty of wind and space.

Christophe Grizard, a Somme farmer and head of the Federation for Sustainable Environment (FED) which opposes turbines, says inhabitants are the forgotten ones of this energy transition. “They set up dialogue, saying to us ‘Do not worry, we are going to ask you for your opinion’, and then they take no notice of us,” he told Franceinfo. So there is also a problem of denial of democracy.”

More parts of France need to be opened up for wind power, says France Wind Energy head, Michel Gioria: “The 47% of the territory that is currently closed to wind power must be gradually opened up, for a more harmonious development of the whole territory. It is necessary to bring back some of the development from the north and the Grand Est regions, to the south and west: Brittany, the Pays de la Loire, Nouvelle Aquitaine.”

Beekeepers in France are turning to CCTV and GPS trackers to combat the growing problem of hive theft.

The target of thieves is not honey, but the bees themselves. For the last decade, hive thefts between apiculteurs (beekeepers) have become more and more frequent, with bee mortality rates increasing due to pesticide use and global warming.

Keepers are losing “approximately 30-35% of the swarm,” says Frank Alétru, president of the national beekeeping union, based in the Vendée.

The price of swarms is also skyrocketing, leading to theft. “We used to pay €100 two years ago. Today, they cost €180”, Hautes-Alpes beekeeper Mathieu Picavet told Ouest-France.

Now apiculteurs are putting €60 GPS sensors inside the hives to allow them to track their location on a telephone.

The sensors do not affect the bees or honey production, one keeper in Franche-Comté told Franceinfo: “We don’t notice any difference, either in the laying of the colony or in harvests. The taste of the honey has not changed.”

Brown food compost containers have been installed alongside the usual glass and plastic recycling ones near a residence in Jurançon, near Pau in the Pyrénées-Atlantiques.

The move is aimed at encouraging food waste recycling among residents, who can throw away vegetable peelings, egg shells or cheese rinds.

The pioneering scheme is set to be rolled out across all HLM (Habitation à Loyer Modéré, or social housing) residences in the Pau agglomeration by 2023.

The council in Pays de Montbéliard (Doubs, Bourgogne-Franche-Comté) has begun debating the idea of offering free bus travel to locals on days when pollution is at its highest – estimated at 12 days per year.

“This is a way of doing positive ecology,” said Magali Duvernois, one of the council's vice-presidents in charge of the environment, whose key aim is to encourage residents to leave their car at home.

‘Village of cats’ in south of France inspired by an old legend
20 January 2022
More from French Life
More from Connexion
Get news, views and information from France
Join the newsletter
Subscribe to The Connexion