The rise and rise of camping cars in France 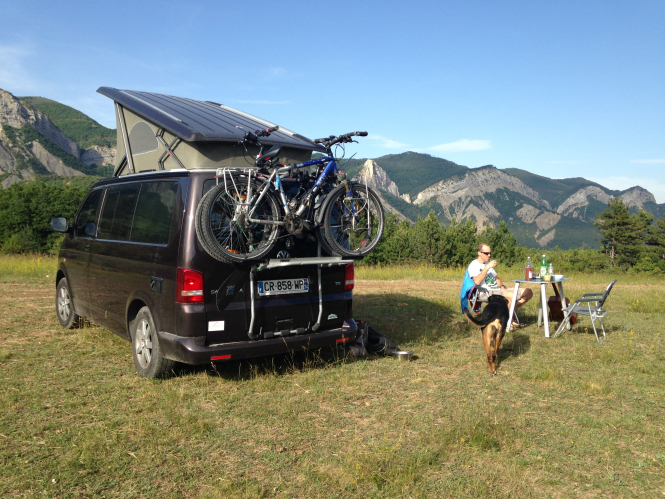 Louise and Bill Peacocke's second VW California has taken them all the way to Iceland and back...
By Brian McCulloch

Sometime before the first swallows of Spring gladden our hearts, the first camping cars of Spring are likely to present their huge cubic, white rear ends to our windscreens.

These days, they are not as slow as they used to be, but still can be annoying as they usually travel slower than cars going uphill, and the vast expanse of white glass fibre blocks forward vision as effectively as a 40-tonne lorry.

Be that as it may, they are very popular in France.

The last two decades saw a boom in sales of camping cars, driven in part by people in work having more time off due to the 35 hour week, and various schemes to encourage people to retire early with generous pensions.

It has not been all plain cruising. The hard financial times which started in 2007, hit the sector hard. A wave of bankruptcies and consolidations followed, before things picked up again.

“Most of the buyers are after one thing - freedom,”  said Didier Hugenot, who owned a camping car specialist garage near Angoulême for 30 years.

“They want to be able to move around and visit places in comfort without having the need to check in to a hotel, or go through the business of pitching a tent and sleeping on the ground.”

Teachers led the camping car revolution, which took off in France in the 1980s and 1990s.

“Above everything else they had, and have, the time to travel,” said Mr Hugenot.

“They are not the best paid civil servants in the world and with a camping car, especially in the early days when many people built their own, they could travel on a limited budget.”

Now everyone, not just teachers, can be found in camping cars, said Mr Hugenot.

A government study found 1.7 million camping cars were circulating in Europe in 2017, with most passing through France at some time.

In France 50% of users were retired, 22% had salaried employment and 13% were business owners or cadre supérieur.

There are fewer converted vans on the road than there were, and almost every purpose-built camping car comes with a double bed, a hot-and-cold shower, a toilet, a washbasin, a gas stove, a fridge with a freezer, a kitchen sink, and a sitting area around a table.

Given that it is all usually crammed into 10 metres square, it is a tight fit.

Most of the technology runs on 12 Volt electricity and bottled gas, with an electric pump the key to getting water to the toilet, shower and sink.

Water is stored in two tanks, typically of around 100 litres, one for clean water and one for dirty, and a typical vehicle now has two 12 volt batteries, a normal one for the engine and another heavy duty one for the living quarters.

Usually they are charged off the vehicle’s standard alternator, and increasingly the electric equipment in a camping car will include television (satellite or antenna reception) and computer access through either satellite or WiFi.

The body usually has a van front but with the rear body replaced by a sandwich body of glass fibre, insulation, and plywood.  It is usual now for manufacturers to replace the standard back axle with a wider wheelbase, to accommodate the body, and improve stability.

Almost all of the camping vans in France now have diesel engines of at least 100HP, and a fair number hit the 150 HP mark.  Fiat is the most popular choice for donor vehicles, because their vans are “very easy to drive and reliable,” said Mr Hugenot.

Fuel consumption is usually between 8-10 litres of diesel per 100 km and the 2017 study showed that most drivers budgeted €17  a day for fuel.

When looking at the weights of the vehicles you can see why fuel consumption is relatively high.

Empty, most weigh between 2.2 and 2.6 tonnes, which means that when filled with water, gas and diesel, as well as food, cups and plates, the 3.5 tonne maximum weight for the vehicles is not far off.

This weight, and the wish to move away from a van-like ride, means most camping cars ride on special, nine ply tyres which absorb bumps on the road.

The growth in the number of camping cars has not been without tension.

Recently the Comité de Liaison du Camping-Car won legal battles against communes which put up signs saying camping cars were  banned. The signs were put up after locals got fed up with the numbers hogging beach promenades and similar tourist attractions.

Other municipalities in the south of France have introduced bylaws with €35 fines for camping cars parked all night outside official camping sites.

Most communes still welcome them and provide basic facilities like water or dirty water emptying sites for free or very little,  in the hope that local businesses benefit from extra custom.

Louise and Bill Peacocke, who live in Haute-Savoie, have just returned from a month-long holiday in their camping-car in Iceland.

They took a ferry from Denmark which took 48 hours to get there.

“It was wonderful, the ferry was expensive, but it meant we could take our own canoes and bicycles and things, as well as lots of French food and wine to escape the high prices,” said Louise.

“Overall, it was no more expensive than flying and hiring a van there.”

The couple have had camping-cars, or camping vans, for most of the 18 years they have lived in France.

Both were paragliders when they were younger, and got into the habit of taking everything out the Bill’s work van at the weekend, putting in a mattress, and searching out spots with the best weather.

Their present camping car is their second VW California, the modern version of the famous “pop-top” VW Kombi loved by hippies in the 70s.

“It is not huge like the plastic bodied ones but still has all the modern conveniences,” said Bill, who installs renewable energy heating systems.

They bought it in Germany, where it is relatively common for first owners to change their vehicle when the guarantee runs out after two years, and Bill estimates they saved around €5,000 by doing so.

The couple mainly go travelling in the van during school holidays, when teacher Louise is free.

They have visited roughly half of France, and also at least 12 other European countries.

“France is pretty relaxed, and we are finding more aire de camping cars in France now, where if you want to stay somewhere, you can hook up site electricity and water,” said Louise.

“People here usually do not mind if you stop somewhere for the night, especially if you make an effort to leave the place as it was, or cleaner than it was, when you leave. We have even had people come over and introduce themselves and have a drink, when we have pulled off the road to stay for a night.”

With a layer of insulation in the fabric sides of the “pop-top” the van remained comfortable, even in the cold temperatures of Iceland.

They also use some of the numerous apps dedicated to the camping-car community now found on mobile phones, which give tips on good campsites, and other help.

In Northern countries like Germany, they found regulations about where they could stop to be stricter.

G’day Sheila could have been b’jour Bruce
16 August 2019
More from French Life
More from Connexion
Get news, views and information from France
Join the newsletter
Subscribe to The Connexion