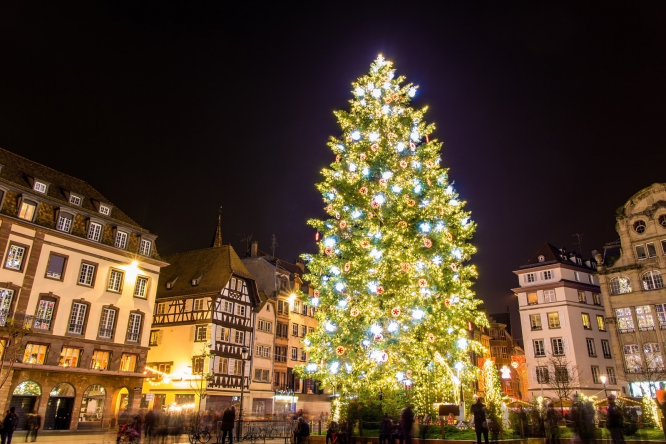 We are again in the month of the winter solstice. Not an ideal gardening season, but a good time for reading and contemplation. This darkest month always makes me think of life’s magic and mystery – and the plants associated with human myth and legend, whose roots run deep in both.

What about the sapin (Christmas tree)? Is it richer in pagan or Christian symbolism? Fourth century pagans are known to have cut the branches of many evergreens – symbolising eternal life at the darkest time of the year – to decorate their homes and celebrate the regrowth of the Sun god’s strength after a period of decline in dark winter nights. The Romans had already been at it centuries before, using evergreens to celebrate the wild festival of Saturnalia (17 to 23 December).

Is the link between the fir tree and the seventh century missionary monk, Saint Boniface, simply the pragmatic grafting of an old pagan tradition onto the newer need for converts to Christianity? He is said to have set out to convince a druid that oaks were not sacred. To this end he arranged for the felling of an oak and when the giant fell it crushed all but a small fir tree. Missionaries are born opportunists, so of course he declared this to be a miracle, adding that from then onwards the fir should be known as the ‘tree of the infant Jesus’.

If you prefer, you could choose to find the mystic origins of our modern Christmas tree in the tradition that describes Martin Luther (1483 to 1546), wandering at night in a dark mid-winter wood. The story has it that he was overawed by the starry sky sparkling through the branches of the evergreens. He cut a small fir and took it home for his family to enjoy, decorating it with candles to replicate the effect of the night sky.

The town records for Sélestat in 1521 record that the craze for Christmas trees was so huge at that time (note that this is still during the lifetime of Martin Luther) that the authorities had to protect the firs in the woods near the town by paying wardens to guard them.

They further ruled that each household could harvest only one tree, to a size no more than just over a metre (‘eight shoe lengths’, is the specification). The custom was to hang the trees from the ceiling and they were decorated with red apples (symbolising the Tree of Knowledge in the Garden of Eden). Candles were added to symbolise the ‘light that illuminates the world’ – the baby Jesus. Hanging Christmas trees are still considered ‘normal’ in Alsace!

The year 1853 saw a poor apple harvest in the northern Vosges – and an innovative glass blower in Meisenthal invented round glass baubles in imitation of the traditional apples. Later, it’s thought that this Germanic Christmas tree tradition was exported to the rest of France as a result of the people of Alsace/Lorraine who fled west, away from the Prussians, during the Franco-Prussian War of 1870 to 1871.

In modern Lorraine, where I live, there is always a big rush to get the decorations up by 6 December, the fête of St Nicolas. In my opinion, that is a tad too early for the survival of a decent Christmas tree right through to Twelfth Night (6 January), but unfortunately that is when the best trees are for sale and I have learnt that I have to act quickly at the beginning of December.

Tips for your French Christmas tree

Of the three kinds of Christmas trees for sale in France – the Nordmann (Abies nordmanniana), the spruce (‘Épicéa’, or Picea abies) and ‘Noble’ fir (Abies procera) – the two Abies species have the most beautiful, long-lasting foliage, and so I choose the Nordmann for the heat of the house.

Outside in the cold, where it won’t lose its needles so quickly, I choose the cheaper spruce and aim to decorate it for 6 December. I buy both trees at the same time, but to keep the Nordmann healthy until I decorate it (around 15 December), I cut off about 2.5cm at the base of the trunk – a cut trunk will accumulate resin within just a few hours, which stops the passage of water into the tree – and immediately place it in a bucket of water in the cold garage.

When I finally bring it into the living room, I use a Christmas tree stand that allows me to add a decent quantity of water, and cut the base of the trunk again. The water needs to be topped up every day, since a further resinous coating will form – preventing water take-up – if the base of the tree is allowed to dry out. A cut tree can drink as much as a litre of water every day. Essentially you are giving house room to a rather mystical cut flower!

I wonder if anyone reading this has experienced the joy of the formal hyacinth garden at Anglesey Abbey in Cambridgeshire? It might astonish you to know that the hyacinths there are planted in December. To create a large display, they go into the ground at a depth of 8 to 10cm, spaced about 17.5 to 20 cm apart. If you’ve grown hyacinths formally outdoors, you may have experienced the annoying phenomenon of your little soldier spikes flopping. There is a suspicion that this could be caused by excessive manure/feeding. So – grow them hard to keep them perky!

What local Christmas traditions involving plants have you encountered in your corner of France? Do let me know! Email news@connexionfrance.com