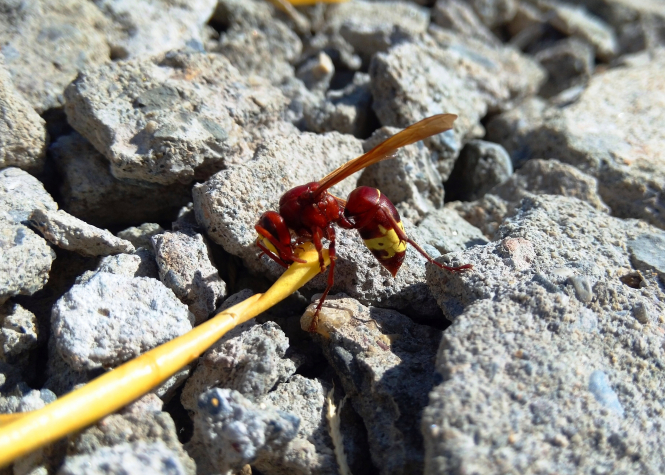 Oriental hornet stings can be painful for humans and cause death in the event of an allergic reaction Pic: Nomvid / Shutterstock

French scientists report they have now found – and had destroyed – two nests of oriental hornets, an invasive species never before identified in France.

It is hoped the destruction of the nests will prevent the spread of the insects – known to be dangerous to bees – although the scientists say vigilance will be needed next spring to check for further sightings. They are different from ‘Asian’ hornets, and can be identified by red colouring, with yellow markings on the front of the face and the third and fourth abdomen sections.

A plan to fight the insects’ spread is now being put in place by the Marseille prefecture.

The successful destruction of the nests came after researchers from the Ecotonia lab in Eguilles, Bouches-du-Rhône came across examples of the insects in late September while studying flora and fauna in an abandoned industrial area 5km north of the old port of Marseille.

They think they could have arrived by boat as the site is near a stream that leads south to the port.

Researchers from Ecotonia, specialised in study of insects, and from the Muséum National d’Histoire Naturelle de Paris joined together to search for the nests.

They were planning to attach GPS trackers to hornets to follow them back to their nests, but in fact say they spotted the nests without this technique, each a few dozen metres from the other, near to the place where the species was first found.

A pest control expert from state health and safety body DDPP in Marseille has now destroyed the nests.

Ecotonia spokeswoman Camille Filippi said: “It’s vital to carry out new research from the spring to see if the species hasn’t established itself in that site, or elsewhere.

“We tried to find the nests as quickly as possible but there’s no 100% guarantee that the species hasn’t moved to another site as well.

“As it’s considered a predator of honey bees, it’s important to put a plan in place to fight against the danger it could pose, support beekeepers and reassure the population.

“That’s not our job, we are a nature expertise consultancy, but we have alerted the authorities and the beekeeping community.”

Ms Filippi added: “It was really considered an emergency, so I think the plan will include advice on how to identify nests and destroy them safely, minimising the use of toxic products, because it’s best not to use pesticides in the current environmental climate.

“I expect funds will also be freed up to train teams and have the right technology, such as GPS trackers.”

Bee-eating oriental hornet discovered in Marseille, a first in France