Bee-eating oriental hornet discovered in Marseille, a first in France 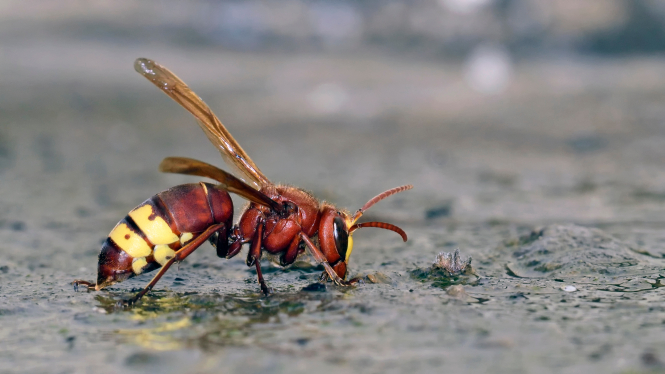 The oriental hornet is red with yellow markings and has a smooth, hairless appearance Pic: ASakoulis / Shutterstock

A species of oriental hornet which preys on domestic bees has been found in Marseille, a first in France.

Researchers from the entomology (the study of insects) laboratory Ecotonia were conducting a routine study into the flora and flora of Marseille when they discovered the insects and have published their finding in the scientific journal Faunitaxys.

The oriental hornet, or the Vespa orientalis Linnaeus, is one of 22 hornet species. It is known to be highly invasive and to feed on bees.

Founder and director of Ecotonia, Gérard Filippi, was one of the researchers who found the insect.

He told FranceInfo: “This species is able to spread very, very quickly. Today it is very difficult if not useless to fight against swarms, because they multiply too fast.”

The researchers found males and females of the species, indicating the presence of a nest that could have existed for some years.

“We don’t know yet,” Mr Filippi said. “The challenge is to find the nest and destroy it as soon as possible.”

Threat to bees in France

The insects’ arrival in France presents a great threat for bees.

As the researchers wrote in their article: “This hornet is considered a formidable predator of domestic bees. We need to verify if it is present in other areas of Marseille or in neighbouring towns and communes.”

It comes as bees in France are already under threat. Each year, populations decrease by 30%, and in the past 10 years 15,000 beekeepers have stopped their work.

A 2016 study from the Environment Ministry found that the extinction of bees would cause a loss of nearly €2.9billion, due to the role that they play as pollinators of farm crops.

Is the oriental hornet dangerous for humans?

Oriental hornet stings can be painful for humans and cause death in the event of an allergic reaction.

However, Mr Filippi said: “Even wasp stings can kill if someone is allergic to them.”

The French health website Ameli.fr states: “The hornet is similar to a wasp but much bigger. It can sting multiple times as, like a wasp, it doesn’t leave its stinger in the skin.”

What to do if you are stung

In the event of a sting, people are advised to call the emergency services if:

In this case, sucking on an ice cube can help reduce swelling.

While the oriental hornet is “more aggressive than indigenous species” in France, Mr Filippi said, “it is not a species that attacks, unless it is being attacked. The most important thing is to not approach a swarm”.

How to spot an oriental hornet

The oriental hornet can be recognised by its red colouring with yellow markings on the front of its face and third and fourth sections of its abdomen.

It has a smooth, hairless appearance.

Insect likely to have arrived by boat

Mr Filippi said it was likely that the oriental hornets had arrived in France by boat, as they were found near the Aygalades stream, which leads to Marseille port.

They have also been present in Valencia, Spain, since 2012 and in Andalucia.

‘No stings yet!’: Feedback from beekeeping beginners in France