This historic Lyon garden is a winter gem 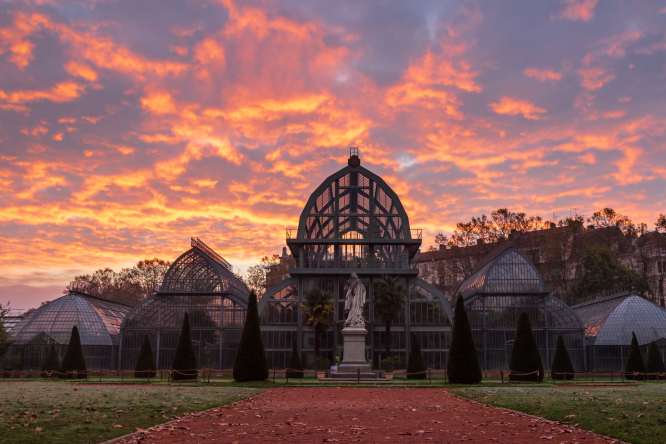 The Jardin Botanique de Lyon is the largest public municipal garden in France, with the widest range of plants. Entrance is free, giving visitors access to an eight-hectare site with eleven themed gardens, impressive 19th century hot houses, plants from all over the world and important national collections. It is situated within the 117 hectare Parc de la Tête d’Or, on the banks of the Rhône, in the city centre.

In the winter the glasshouses are a wonderful way to enjoy a garden visit. In Lyon, the Grande Serre is a veritable cathedral of glass and steel, and at 21metres is one of the tallest in France. It was originally built in 1880, reconstructed in 2000, and closed for three months last winter for more renovation work. It is now open to the public every day of the year.

Nelly Garcia, responsible for communication for the gardens, says you can see plants in them from all round the world:

“Les Grandes Serres are divided into three parts. In the central section temperatures never drop below 18°C and there are species from Africa, Australasia and South America. In a hotter and more humid section there are many plants from the French overseas departments and territories and the third area is for the collection of camellias which have a magnificent showing when they come into flower from around February onwards.

“They could live outside in our climate, but this is where they were originally planted, and so they have been left here. Many of the plants under glass are examples of those used by man, either as food, such as the coffee and cocoa trees and those used for perfumes and medication.”

There are other glasshouses, but because they are smaller they remain closed at present due to Covid-19 restrictions:

“One is round in the form of the lily it was built to house, the famous Victoria water lily, which was the plant all the major gardens had to have in the 19th century, introduced to Europe by the British and named after their Queen. Since it was first introduced it has been replanted every year as it is an annual. Other water plants, include Pelliciera rhizophorae which is so rare it is only cultivated at Lyon and Kew gardens in London.”

Another glass house is dedicated to carnivorous plants, “always popular with visitors” and a third shows the vast variety of South African vegetation with 1,500 different plants, which includes a collection of pelargoniums, which are mostly native to South Africa. They are popular as annuals in Europe, but are often mistakenly called geraniums. The Royal Horticultural Society says this is because the great Swedish botanist Carolus Linnaeus included all the Pelargonium species under Geranium in his classification work Species Plantarum in 1753.

In 1789, French botanist Louis-François L’Héritier clarified the difference between the two, but it seems it was too late as the confusion continues. Geraniums have a symmetrical flour and are hardy herbaceous plants, whereas pelargoniums have irregular shaped flowers and will not survive frost.

Colour in the colder months in the outside winter garden

Outside there is a winter garden, created in 1964 by the then director of the gardens Paul Berthet, so there would be colour in the colder months. There are around 80 species which flower either from October to February or March to April and they can all resist temperatures down to -15°C.

The other themed gardens are alpine, Mexican, the shade garden, insect garden, vines, peonies, flowers, bamboos, an arboretum and the historic rose garden. Though the latter is not so interesting in winter, it deserves a return visit later in the year because it traces the history of the development of this plant in the city which was a pioneer in the research for new varieties and earnt it the name Rose Capital. Between 1869 and 1914 it is estimated that 60% of roses in the world at that time were created in Lyon.

“The floral garden is also of interest,” says Nelly Garcia, “because it shows that Lyon was a pioneer in plant research in the past and continues to be so in the present. The Jardin Botanique de Lyon works with producers and plants new experimental varieties of flowering plants, mostly annuals, in this garden in May and if trials are successful, they may be on sale to the public, two or three years later.”

'A botanic garden is defined as one which has documented collections of living plants which are not there for their aesthetic value, but for research, conservation, display and education'

The botanic gardens share information and exchange seeds and plants. In Lyon, 40 people work in the gardens. Twenty are gardeners, and the others are scientists, guides and a few administrators. Making their collections known to the general public is part of their work:

“We know around 8,000 people come a year on organised trips, but it is impossible to know the total numbers of visitors because as entry is free there is no trace. Unfortunately visiting gardens is still not such an important part of the culture in France, as in the UK and we are unable to attract as many as go to the RHS gardens at Wisley [One million visitors a year]. Sometimes people think we are just part of the Parc de la Tête d’Or and do not realise we have so many rare, exotic and fascinating plants to discover.”

Opening hours plus PDF guides to download are at jardin-botanique-lyon.com. You can also find suggested tours with information on the plants on the application izi.TRAVEL.

16 hours ago
4
Undelivered letters: Why is France’s postal service struggling?

Aerovillages project in France: Housing estate with planes in garage
20 January 2022
More from Nature
More from Connexion
Get news, views and information from France
Join the newsletter
Subscribe to The Connexion