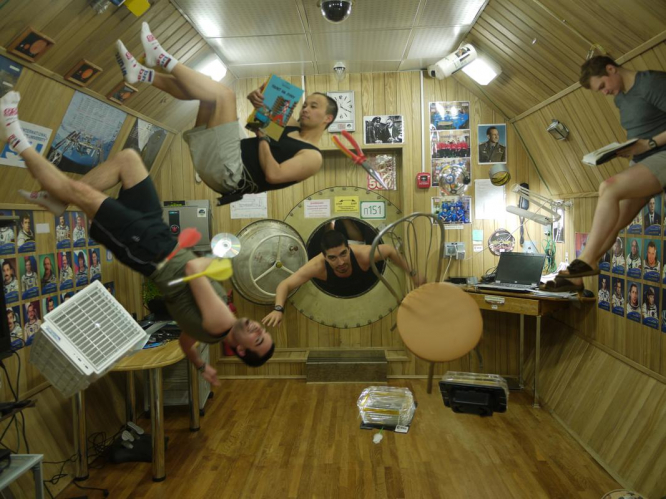 If you think the Covid-19 confinement is difficult, imagine spending 520 days enclosed in a tiny space with five other people.

That’s just what confinement expert Romain Charles did when he signed up for the Mars 500 experiment, carried out in 2010-11 to explore the psychological ramifications of sending humans to Mars.

Eighteen months – 520 days – is the time it would take to travel to the Red Planet, spend 30 days there, and then return to Earth.

The six men who took part in the experiment entered a mock-up Mars capsule in Moscow. It had no daylight, no fresh food, no running water and only restricted contact with the outside world.

For 520 days they carried out experiments, collected data about their physical and mental well-being, and maintained their environment – all without once leaving the capsule.

Mr Charles said the group proved that a journey to Mars was psychologically possible, despite the long confinement.

“It was a long time, but I was very motivated because I wanted to contribute towards space travel to Mars, and I also wanted to get a job connected to space exploration,” he said.

Although the general public never specifically signed up for the lockdown, as he did for Mars 500, he said that everyone can find motivation in wanting to succeed.

In his case, it was the experiment, and in the current situation it is beating Covid-19.

“Motivation helps us continue difficult tasks,” he said. “Another common point is that both experiences are temporary. The lockdown will not last forever.

“During Mars 500, I reminded myself that it was only 18 months. Sometimes I got incredibly strong yearnings for a croissant, and I promised myself the best ever croissant at the end of the experiment. That kept me going.”

It’s important to have faith in the future, and look ahead to life beyond confinement. “You have to get some distance on it, look at it from outside.
“In future, when we look back on this, we’ll see it’s just a few months. But you have to live in the present.

“In the capsule, we were always busy, always had lists of things to do tomorrow, so the time passed day by day. Look-ing at the total time isn’t always helpful. It’s best to keep the brain busy, and do a day at a time.”

He said he is approaching the current lockdown in the same way and is grateful for all his home comforts.

“I am with my wife. I have windows, so I can see outside.

“I have internet and phones for communication, entertainment and studying.

“It’s much easier than it was during Mars 500, when we didn’t have internet or email.

“We sent messages to a control centre, so it was like sending letters. Communications were shorter and less regular.

“But when messages did arrive, they were important – in fact, everything from outside became very important.Towards the end, every single message was read many, many times, and I looked at press articles and videos many times, too, because they were so precious.”

He said the group got along well and avoided conflicts because they were all open to discussing their thoughts and finding compromises.

“In some ways, it was easier than getting along with family because we didn’t have any emotional baggage.

“We were selected on our psychological profiles. We are all team players who function well with others, and we are all people who look for solutions.
“We’re all still close friends and meet whenever we can.”

He said that talking, listening, and finding compromises is central to making a team work well in confinement.

“Of course, it’s much easier to say it than to do it. We all have our own problems, juggling working from home with trying to home-school children is a challenge, as is being separated from family.

“Everyone has different challenges. In Mars 500, some crew members got 10 times fewer messages than me but were fine about it, whereas I would have found it hard. So we have to understand everyone’s different needs and difficulties.”

“I organise special foods, communication with families ... my experience means I know what they need.

“Food and communication are important, and celebrating special days.

“A regular routine is vital, but you must break the monotony with celebrations – dressing up on Halloween, for example.”

The International Space Station (ISS) is about the size of a football pitch, and astronauts living on it also know a lot about confinement.

French astronaut Léopold Eyharts (pictured, below), who spent two months on the ISS, said: “We’re often only 400km from the Earth.

“That’s less than the distance between Lyon and Bordeaux. But we are isolated from it for long periods.

“What makes that experience different from today’s confinement in France is that astronauts choose it and prepare for it very carefully.”

Travelling to the ISS is a dream come true for most astronauts, who have worked towards it all their professional lives.

“But here on Earth, even though we didn’t have the choice this time, we still have to accept this confinement and find the positive sides.

“We can own it, agree with it, be motivated to succeed, and then it is better.”

He advised that it is best not to count the days, but to concentrate on positive things, such as a nice lunch, an interesting view from the window, a phone call with a loved one, and stay in the present.

“We have to prepare ourselves for loss of control, for long-term disruption.

“We have to understand why we’re doing this, and we have to temper our reactions.

“Some constraints are perhaps too much, like cycling in the countryside, but we have to accept them and enjoy the things we can do.”

For many people currently confined in France, isolation is the challenge, but for others getting along in a group is the main task in hand. “Astronauts are increasingly chosen because they have certain sociable characteristics,” he explained. “We all have our individual personalities, so teams are chosen with that in mind, to minimise conflicts and situations.

“Astronauts are trained to resolve personality clashes – we send people into caves and put them into stressful situations to see how they manage.” In space, living conditions are variable. There are three to six people living on the ISS at any time, but there is space for everyone to have some privacy.

Each astronaut has a sleeping space that they can personalise with photos and personal possessions.

Mr Eyharts admitted that astronauts who have spent a year on the ISS have found it hard.

He said people have usually had enough after six months. “They want to get back to Earth, where they have people, showers, cooking, and proper beds. The shuttle takes 48 hours, and although we can move around, it’s like being in a minibus.

“Seven people have spent 15 days in the shuttle, where there are no individual cabins and only one toilet, so you really are camping in the rain.

“But in the ISS everyone has their own cabin, their own laptop and phone, although when calling home, because the ISS operates on Greenwich Mean Time, you have to be aware of the time zones on Earth.

“So it’s much easier than my first mission, Pégase, on board the Russian space station Mir.

“It was only three weeks but we didn’t have 24/24 communication and there was little distraction.

“Once you have found your motivation, you need to set a timetable of activities. It is not easy, but in confinement it is best to get up on time, exercise, work, play, communicate with family, eat, go to bed on time.

“Following the routine contributes to life functioning well on the ISS. We also eat a very balanced diet, although the food is not very varied.
“After a few weeks, you long to eat in a restaurant, or at least eat something different.

“Sadly, there’s no chance of a little glass of red wine, but during the confinement here on Earth, I think just a glass with dinner is good and relaxing.
“It’s also important to mark the difference between weekdays and weekends.

“It’s important to rest and relax. On the ISS, if we do work over the weekend, we take time off in lieu during the week.”

He noted that it is important to define and respect community rules when cooped up with other people.

“You have to make yourself compatible with other people and that sometimes means restraining yourself, learning to talk about things calmly, and negotiate solutions.

“It’s also important to ensure private time for everyone.

“On the ISS we have a weekly conference with a psychologist, so we can talk about how we feel, get rid of stress, vent to an exterior third party.”
He said today’s IT and communications technology can be a mixed blessing.

It makes it possible to communicate with people all over the world, watch films and live performances, listen to music, and participate in events, including classes, lectures, virtual museum tours, and explorations of foreign cities.

However, it can also provide too much in the way of news.

“To begin with, I consumed a lot of news, but now I follow it less. I am learning guitar, and watch tutorials on YouTube, and I use a flight simulator.”

He added: “We all need distractions and interests – almost all of us have stuff to repair around the house.”