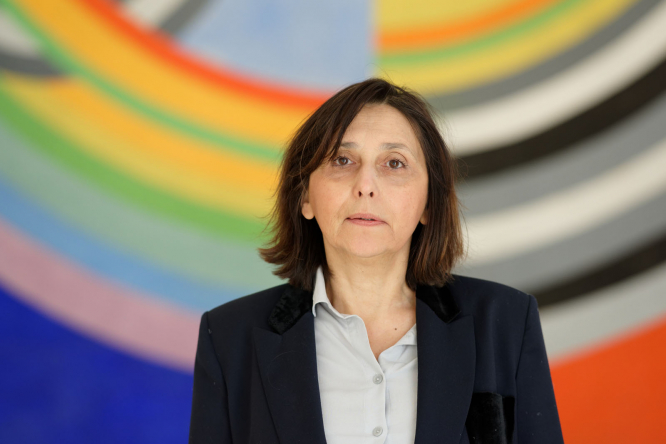 The donation was made official at the ministère de la Culture on July 23 the following year and was allotted to the Pays de la Loire region with an understanding that it would create a museum in the Abbaye Royal de Fontevraud.

“I was very excited about the idea of creating a museum from the very beginning,” said Dominique Gagneux, Directrice-conservatrice du Musée d’Art moderne de Fontevraud.

Her role was to oversee the implementation of the new museum and curate the collection now known as ‘Collections Nationales Martine et Léon Cligman’.

“I had to design the programme very quickly. I had to know what I wanted to say about the collection, what the story is, what the storytelling could be and what kind of project would attract the public.”

In July 2019, the couple donated a further 300 works to the region, stating at the time: “We wanted to give back to France what it has given us.”

‘Collections Nationales Martine et Léon Cligman’ is the result of a 60-year love affair and dedication to the arts and are pieces that were in their homes.

“Despite the names of the artists, they chose their works regardless of the trends. It’s their specific and personal taste and that is very interesting to show to the public,” Ms Gagneux said.

“It’s not only the more expensive works or the most famous artists, there are many, many, many artists and painters and sculptures that are not very known or that have been known but are not known anymore and it’s interesting to discover all of these paintings they were living with as a museum.

“Other pieces of artworks were also in the storage room. So all of this had to be gathered in the place where we worked with conciliators for what we call in French, a chantier des collections.”

This included implementing conservative operations, involving contractors such as restorers, conservators, framers and photographers – some of this was just to prepare the works to go from a private residence to the museum – as well as recruiting a team.

The collection includes more than 100 paintings, 300 works on paper, sculptures, 88 glass works and antiques and objects from outside Europe including Africa, Oceania, Asia, and America.

“The public can live many moments in front of the artworks of the collection and maybe I should say that the most impressive are the set of sculptures by Germaine Richier. She was an incredible female sculptor, as important as Giacometti, I think, for modern sculpture.”

Roughly 500 pieces are on display, with just a few of the highlights including paintings such as Tête de gitane by Kees Van Dongen, Les Mots croisés by Juan Gris and Toulouse-Lautrec, de dos by Henri de Toulouse-Lautrec.

There are also sculptures by Edgar Degas, an Egyptian funeral mask and set of Yoruba twins and glassworks by Maurice Marinot. “The principle of the museum is based on dialogues, conversations, confrontations. Objects are put together and they come from different areas of the world and they belong to different periods,” Ms Gagneux continued.

While the couple have been collecting for more than six decades, their lives together began when they met at the end of the war.

Born in 1920, Léon studied at the Ecole Supérieure de Commerce de Paris and began a career in the textiles industry.

He later became president of Indreco (Newman, Mendès) and Devanlay (Lacoste, Scandale and Jil and Orly).

The daughter of collectors, Martine was raised surrounded by art. Later she attended courses at the Académie de la Grande Chaumière. Martine is also an artist, known as Martine Martine, and several of her own creations are included in the collection.

It’s no surprise as to why the Abbaye Royale de Fontevraud was chosen as the backdrop for this new venture.

An architectural piece of art with a rich history - it’s one of the largest monastic cities dating from the Middle Ages and is a Unesco World Heritage site.

Located in the Cour d’Honneur of the Abbaye, the Fannerie – which houses Dominique Gagneux, and some of the works she has curated creating a museum out of a massive art collection in double-quick time Musée d’Art moderne de Fontevraud is one of the first buildings that visitors see.

Built at the end of the 18th century, it was originally used as a stable and then as a place to store corn. Now classed as a ‘Monument Historiques’, it was in poor condition and underwent an extensive renovation project to become the museum and new home to these treasures.

The Musée d’Art moderne de Fontevraud is contemporary meets ancien with 1,205m2 of exhibition space across several floors, specifically dedicated to ‘Collections Nationales Martine et Léon Cligman’ and the additional works that accompany it. The remaining 600m2 is for temporary exhibitions.

Ms Gagneux has two memorable moments from this journey so far:

“The first one was when Martine and Léon entered the finished museum for the first time. The emotion was very strong and fortunately they loved it because they didn’t follow exactly what was happening and then they called me. They were very, very happy and so it was a very emotional, memorable moment.”

The second was during the opening when a visitor sent a well-deserved bottle of Champagne to the table where the team were sitting to say thank you for opening the museum.

The Museum was initially planned to open in July 2020 but postponed due to Covid-19. When it was able to open its doors in May 2021 it welcomed 2,000 visitors in the first weekend – an increase of 10% on prior years.

The region is responsible for ‘conserving, restoring, studying and enriching the Cligman collection.

“We have everything to conserve the works and we also want to buy other pieces of artworks. We have to increase the collection, Léon and Martine gave money to do that too,” Ms Gagneux said. In the future, drawings will rotate and temporary exhibitions are in the pipeline.

There will also be a new exhibition with French-British contemporary artist Alice Anderson who explores dialogue with the objects of the collection.

Plus, with a hotel and restaurant onsite, there is more reason to stay for longer and enjoy the experience.

“It’s very important to have access to these artworks.

“Some visitors left the museum crying, and I talked about that with Alice Anderson and she said when you’re in Paris you have access to many things like that. But here it’s not so easy in some remote areas, you don’t have access to artworks and it is very important to give this to the public.”