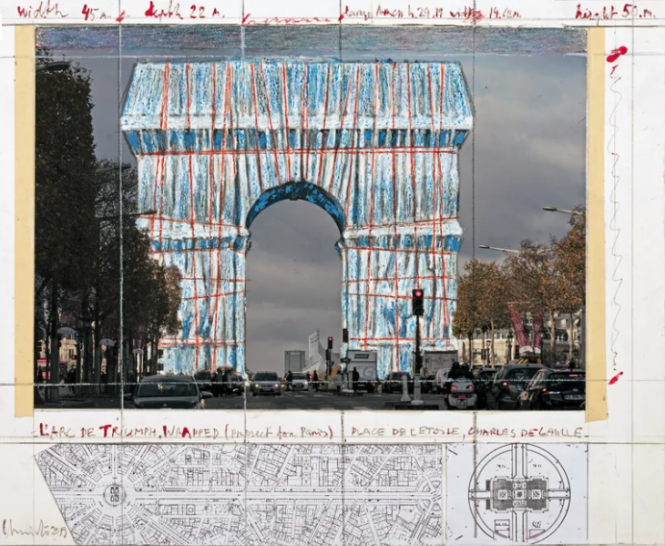 The work of the artist known as Christo, who is best-known for wrapping monuments such as the Pont Neuf in Paris (1985) and the Reichstag in Berlin (1995), is returning to Paris later this year.

This new installation will see France’s Arc de Triomphe wrapped in 25,000 metres of recyclable fabric and 3,000 metres of rope, costing €14million to produce.

For comparison, it took 41,800 square metres of sandstone-coloured fabric, secured by 13 km of rope, to wrap the Pont Neuf.

Considered a radical new form of outdoor public art, the work was immortalised on a stamp by La Poste in 2009.

As the artist, Christo Vladimirov Javacheff, died last year at home in New York, it will be his nephew Vladimir Yavachev bringing Christo’s L'Arc de Triomphe, Wrapped (originally conceived in 1962), to fruition.

"The fabric translates movement (...), which creates different sensations and with the wind, makes it much more alive", Mr Yavachev told France 2.

It "will provide a refined and contemporary vision of the historic building that we know", Jeanne d’Hauteserre, mayor of the 8th arrondissement of Paris, told franceinfo.

She also confirmed the project was being financed by an events company.

The monument is currently being prepared to take on its starring role, as before the famous arch and its many sculptures can be wrapped, it must first be protected from damage.

L'Arc de Triomphe, Wrapped will be unveiled on September 18 and remain in place until October 3, 2021.

Christo was born in Bulgaria, but spent 56 years of his life living in New York. He met his Moroccan-born wife Jeanne-Claude Denat de Guillebon in Paris and the couple went on to create works of art together, many of them under his name. She died in 2009.