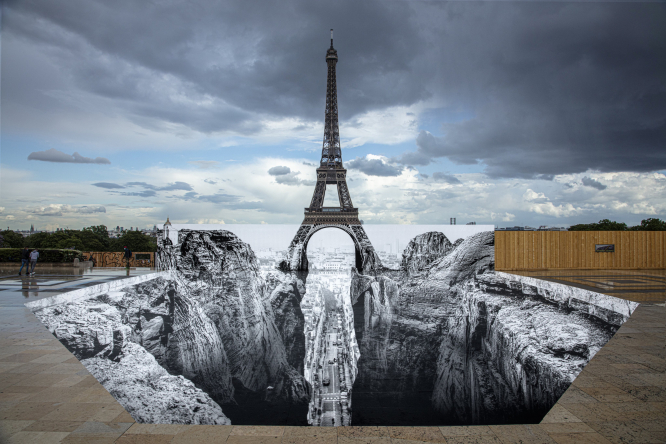 French photographer and artist JR, whose real identity remains a mystery, has created a large optical illusion that incorporates the Eiffel Tower in Paris.

The illusion appears to show the Eiffel Tower balanced precariously between two cliffs, with busy city streets running below.

The installation is at the Trocadéro square at the site of the Palais de Chaillot in the 16th arrondissement of the city.

JR, who is famous for his anonymity, trademark dark hat and glasses, and for iconic, large-scale street art installations, was invited by the Palais de Chaillot to create this latest piece.

He posted images of it on his Instagram, along with a video.

“If you are in Paris, I have a little surprise for you guys,” he says in the video.

“It’s going to be up for one month, and you are all welcome to come and walk on it.”

JR has made several documentary films, including a 2017 collaboration with the late French filmmaker Agnès Varda, titled Faces Places, which won the best documentary film at the 2017 Cannes Film Festival.

The Eiffel Tower to reopen

Paris’ most famous monument (arguably) will reopen to the public on July 16, after what will be by then a nine-and-a-half month closure.

The tower, which welcomed some 6.2 million visitors in 2019, had to close between mid-March and the end of June last year, during the first lockdown linked to Covid-19, and then again at the end of October.

It is the longest the 132-year old landmark has been closed since World War Two.

When it is reopened, visitor numbers will be limited to 10,000 a day, in line with Covid-related rules. This is around half the usual amount.

The tower is undergoing renovations, including a new paint job, to prepare it for the 2024 summer Olympics, which will be held in Paris.

Online bookings to visit the Eiffel Tower will open on June 1.

Process, costs, carte grise: How to register a car in France
7 January 2022
More from Culture
More from Connexion
Get news, views and information from France
Join the newsletter
Subscribe to The Connexion