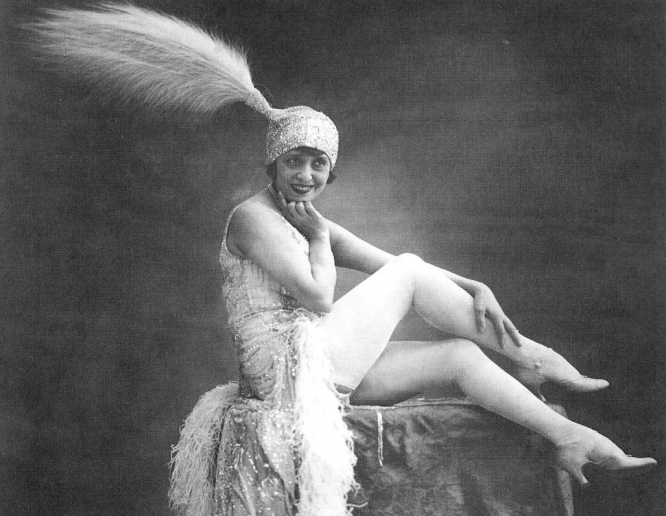 Although Mistinguett remains beloved in France, there is only one street named after her; called Jeanne Bourgeois Dite Mistinguett, in Montpellier Pic: Wikimedia

Today, a mistinguett is any young woman who pays a lot of attention to her appearance, but the original Mistinguett (1875-1956) was a whole lot more than that – a jobbing singer with a limited repertoire, she became universally known as the Queen of the Music Hall. According to no less a luminary than Colette, she was a national treasure.

Jeanne Florentine Bourgeois was born in Enghien-les-Bains in 1875, the daughter of a labourer and a seamstress.

Star-struck from childhood, she would sing as she sold flowers in the market at Soisy-sous-Montmorency where she grew up, and eventually took lessons in theatre and singing.

By the time she was 10, she had managed to wangle a job raising and lowering the curtain at the Casino de Paris.

In 1893, she made her first appearance on the stage. She used the stage name Miss Hélyett which gradually morphed into Miss Tinguette, Mistinguette, and finally without the final ‘e’ Mistinguett.

In 1894, she appeared at the Trianon- Concert with limited success. Later in life she recalled having asked neighbour Anna Thibaud, an established singing star at the time, for career advice. “You have to be pretty, you must excite men,” she was told.

Mistinguett took the advice to heart. She made up for her lack of a singing voice with comedy and a little dancing. Her act became increasingly risqué as she appeared at the Folies Bergère, the Moulin Rouge, and Eldorado – and men were indeed captivated. It was not accidental, nor was it easy. She worked her way up, learning her craft, building her career performance after performance.

In 1901, she bought a house near her aunt in Montlignon, where she gave birth to her only child, a son called Léopoldo João de Lima e Silva.

In 1908, she made her first film, L’Empreinte ou la Main Rouge, and carried on working live as well as making films. Until 1936, her films were all silent.

In 1912, she appeared with Maurice Chevalier, who was 13 years her junior at the Folies Bergère and they started an affair which lasted a decade although she never married him – or anyone else.

When the First World War broke out in 1914, Chevalier was captured and taken prisoner in Germany, and almost as if her life were the plot of a film, Mistinguett swore blind to get him released.

She offered her services to France as a spy. Granted complete freedom of movement, she sent information back to France as she hob-nobbed with the likes of Austro-Hungarian Prince Gottfried von Hohenlohe-Schillingsfürst, and King Victor Emmanuel III of Italy.

Finally in 1916, she managed to persuade King Alfonso XIII of Spain to intervene and liberate Chevalier.

After the war, she went back to work, starring in a series of operettas which attracted the rich and fashionable from Paris and beyond.

Her image was sexy and glamorous, but there were hundreds of sexy glamorous girls working in music halls.

She made jokes about herself, she was always fun. She was not the best singer, she was not the most beautiful actress, but watching footage of her performances – there is some on Youtube – she exuded pure joy on stage.

Along with Josephine Baker, she led the pack as they partied to forget the war years during the roaring Twenties.

In the economically depressed Thirties, she was the image French people liked to think they personified on the world stage: liberated, sophisticated, beautiful, stylish and enjoying the good things of life.

Widely known as ‘La Miss’, her string of lovers burnished her reputation

She had an intense relationship with Charles Germar, a designer 25 years her junior. He moved into the same building as Mistinguett, jokingly called her ‘Maman’ and created all her posters and costumes until he died, in 1928, of pneumonia.

In 1923, she was the star of the show at the grand re-opening of the Copacabana Palace in Rio de Janeiro.

At the time, she was the highest-paid entertainer in the world, and toured both North and South America.

She had a string of hit songs including Je cherche un millionnaire, Ca c’est Paris, and Mon Homme – the lyrics of which certainly were designed to please men.

Dressed in sparkles and ostrich feathers, she sang these lyrics portraying a doomed creature in love with an undeserving man, while simultaneously winking over her shoulder at the audience.

She loved performing, and spent her life pursuing her glittering career.

Despite lyrics which sound decidedly dodgy to the modern ear, Mon Homme, which Mistinguett first recorded in 1916, became a massive hit – and an English version called My Man was popularised by Fanny Brice.

Touring in the US, Mistinguett was once asked by a journalist to explain her popularity. “It is a kind of magnetism,” she said. “I say, ‘Come closer’ and draw them to me.” It was a trick she maintained until the end of her life.

In 1936, at the age of 64, she made the film Rigolboche about the eponymous 19th-century Cancan dancer. The film was re-released in 1941 as Reine de Paris.

During and after the war, she went on working, appearing at galas and reviews, appearing on hoardings advertising biscuits, and somehow, despite her advancing years and expanding waistline, she remained cheeky, sexy and glamorous.

She died from a ‘brain congestion’ in 1956 at the age of 80, with her son at her bedside, and France went into mourning.

'She was of the animal race that owes nothing to intellectualism. She incarnated herself. She flattered a French patriotism that was not shameful'

In an obituary, Jean Cocteau wrote, “Her voice, slightly off-key, was that of the Parisian street hawkers — the husky, trailing voice of the Paris people.

She was of the animal race that owes nothing to intellectualism. She incarnated herself. She flattered a French patriotism that was not shameful

“It is normal now that she should crumble, like the other caryatids of that great and marvellous epoch that was ours.”

Although Mistinguett remains beloved in France, there is only one street named after her; called Jeanne Bourgeois Dite Mistinguett, in Montpellier.

There is, however, a plaque on the house where she lived in Paris at 24 Boulevard des Capucines in the 9th arrondissement.

Enghien-les-Bains, her birthplace, held a festival in her honour in 2006, which prompted Christian Lamet to make a documentary about her.

And even at night when I dream,
it’s of him, of my man.
It’s not that he’s handsome, rich or
strong, but I love him, it’s mad.
He hits me, he takes my money,
I’m at the end but despite everything,
what do you want...
He’s so under my skin,
it’s driving me mad
As soon as he approaches,
it’s finished, I am his.
When he lays his eyes on me I melt.
I have him so much under my skin,
that at the least word I’ll do anything.
I would kill, I confess.
I know he would make me evil,
but I’m only a woman!
And I have him so much under
my skin.
It’s crazy what other men have offered
me to leave him.
Between us you see, men aren’t worth
much.
Women to tell the truth, are only
made to suffer from men.
In clubs I’ve run, to forget I’m drunk.
It’s useless! I couldn’t!
When he says “Come!” I’m like a dog.
There’s no resisting, it’s like a link
ties me.
I have him so much under my skin,
I’m dingo from it.
And the woman who hasn’t known
this, let her dare throw the first stone
at me.
Having a man under your skin, is the
worst of all pains.
But it is to know love.
And I say you have to pardon it when
a woman gives herself to a man she
has under her skin!
He’s my man.

The Connexion is hiring an experienced journalist
20 September 2021
More from Profiles
More from Connexion
Get news, views and information from France
Join the newsletter
Subscribe to The Connexion