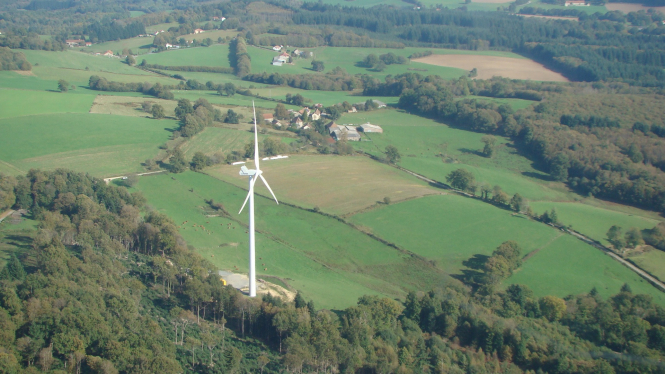 About a quarter of the French population lives and works in rural areas, where villages continue to suffer from decreasing population and where, when the local school closes, it often sounds the death knell for the entire community.

However, two villages, one in northern Dordogne and another just 25minutes away over the border in Haute-Vienne, have proved that with imagination, commitment and a great deal of work and tenacity the life of a village can continue even when the playground is empty.

Saint-Pierre-de-Frugie, Dordogne, has attracted new residents and visitors by becoming an eco-village and exploiting its natural beauty, while residents in Rilhac-Lastours have built their own wind turbine and the commune is about to increase its production of renewable energies by building a solar park.

Eight years ago Saint-Pierre-de-Frugie had no school, no restaurant, no shops, a tiny room as the mairie and there were ‘for sale’ notices on several houses. That is until Gilbert Chabaud was elected mayor and determined to do something about it.

“First we decided to look at what resources we had at our disposal. With the commune’s employees, the cantonnier [council chief gardener] and voluntary help from local residents we restored all the attractive features such as the fountains, war memorial and crosses.

“We were able to get the funding to build a mairie where people would feel welcome and we cleared the overgrown footpaths to attract walkers. We made a detailed list of all the local fauna and flora and realised we were in a very rich area for nature lovers.

“We then needed a place to lodge and feed visitors so we restored a house and turned it into an 18-bedroomed gîte and re-opened the restaurant.

“After the education authorities closed the public school we opened it as a Montessori school and there are several children on the waiting list.

“We have also added an organic shop and an educational garden with an eco-centre and, as you can see, there are plenty of cars parked in our tiny village. There can be life in the countryside and jobs as well – we have created six new posts here.”

The results are clear: the population in 2008 was 360 and has now risen to 400; the shop was the first organic one in the area and is popular, while the gîte is nearly always full to capacity.

Ecology has been the theme through which the village has evolved, Mr Chabaud said: “I wasn’t a green crusader when I started out – before I retired I was in the automobile industry – but there were employees in the mairie who were passionate about ecology and as it matched the resources we had in the village it seemed the right way to go.

“We now have 22% of land converted to organic farming, whereas it is 3% for the whole of France.

“Not all of the population were convinced at first but I tried to go slowly and explain what we are doing. Now many of them have joined the confirmed ecologists in the shop to buy organic produce.”

Guillaume Claude is the chief gardener and is more than delighted to show visitors around the commune’s plot: “We have an experimental garden and we invite children from nursery school up to secondary school and even students from Limoges Uni­ver­sity. We practise permaculture in raised beds where we never need to dig the land but enrich it with layers of straw or wood chippings, meaning we only need to water when it has been a very dry summer like this year.

“We practise companion planting and experiment with new systems such as one from Africa where you put your compost in the middle of a raised circular bed and the roots of courgettes planted around the compost net delve in and take the goodness they need direct from your heap.

“We also have beehives and make our own honey.”

He loves his job: “I am passionate about it. It is great to see the kids going into our soft fruit bush maze and coming out with raspberries, gooseberries and blackcurrants which we then turn into jam.

“I am always learning. I seem to spend more time observing nature than actually gardening!”

Roger Haigh who runs the Franco-British Chamber of Commerce in Dordogne and has lived in the commune for 24 years and seen the changes. He has nothing but praise for the mayor: “What he is doing matches what we do at the Chamber of Commerce, striving to bring economic regeneration to the area.

“I don’t think he had it all his own way at first but because he has taken it a step at a time – and because he has been successful – he has convinced anyone who was critical at the start that this was the way forward.

“He is keen to attract new inhabitants and asked me to take brochures to the France Show in London.”

Mr Chabaud said although ecology had been the regeneration’s cornerstone it was not the only aspect: “We wanted to create opportunities for people to meet up and culture is a good way of doing that. We regularly hold concerts with big names, like pianist Gabriel Tacchino at reasonable prices between €15 and €20. In the summer there are six concerts. One jazz and five classical.

“I think our experience shows rural desertification can be turned around.”

Watts up: turbine is a success so village looks at solar park

Across the border in Haute-Vienne, Rilhac-Lastours has one of the first community wind turbines built in France and it was also the result of an attempt to diversify, this time to give a group of five farmers an additional income as they were finding it hard to make a living in agriculture.

This and a similar scheme at Béganne in Morbi­han were inaugurated on June 14, 2014 but it was an ambitious project that took 10 years’ hard work and saw the price jump from €1.5million to €2.8m. It was difficult to get a loan for such an avant-garde project and they had to find a bank which backed renewable energy projects. The farmers realised they would need other associates and in the end a total of 53 partners contributed.

One of those original farmers was Jacques Barry, who is now mayor of the village. He is immensely proud of their achievement and happy to show visitors the turbine, called La Citoyenne. “It is beautiful. Much more attractive than the huge red and white television mast on the opposite hill. Listen, it really doesn’t make much noise, just a soft swishing noise, almost like having a stream at the bottom of the garden. I live 500m away and it never disturbs our peace and quiet.”

The investment was huge and they will not see any financial returns for another 15 years while the loan is being paid off, but he says he would encourage other people to think about taking part in such a project.

“We did it to improve the life of local farmers but also to contribute to the environment by producing a renewable, clean energy and to benefit our local communes. It means that local people take responsibility for the power that they consume in their own house and don’t just leave it to the big multi-nationals.

"I am now working on a project for the village to create a solar park in a forest clearing which won’t be an eyesore but will contribute to our green energy production.”

The village faced a hurdle – it sits in the Parc Naturel Régional Périgord Limousin, so planning permission was difficult as the turbine could not be built within sight of the village with its 12th century castle. A hilltop site, which would have been ideal, was ruled out but they were allowed to install it further down into the hillside, which makes it 15% less efficient, but also makes it less visible.

It now produces 3,600MW a year, enough for the electricity needs of 1,440 homes, although the power is sold to the national grid. The 122m turbine needed 50 lorry loads of concrete for its foundations and took two days to build.

Community energy projects are on the rise and the majority are assisted by Energie Partagée, an association which has been set up to give advice and raise funds.

Spokesman Marc Mossalgue said they had 300 projects including wind, solar, water and biomass: “In a very short period we have seen a huge expansion and while we are behind Denmark and Germany it is more complicated here as our system is centralised. You cannot form a company and produce electricity for your own consumption. It has to go into the national grid which pays for power you produce.

“However, if you live near a community wind turbine it is more than likely the electricity you are using does come from that source as the grid tends to direct energy produced to the nearest users.”

Energie Partagée also has an invest­ment scheme so people can help projects even if there are none nearby. “People can place savings with us from as little as €100 with an average 4% return to help get projects off the ground. We have 5,000 investors and raised €12m so far, but it is not enough.”

Local energy projects were a good way of using local resources and benefiting from them. “Residents become responsible for the electricity they use in their own home.”